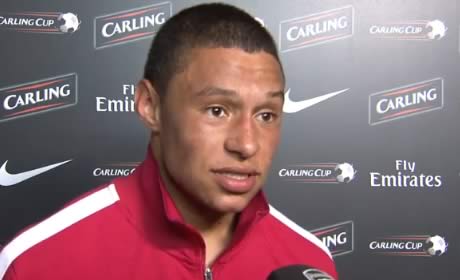 Alex Oxlade-Chamberlain says it was just great to be involved as the Gunners beat Shrewsbury Town in the Carling Cup last night.

His last involvement with the first team was the 8-2 defeat at Old Trafford, and with new signings providing something of an obstacle to Premier League involvement, he was delighted to play last night.

In his interview with Arsenal Player after the game, the well-spoken, self-effacing young man, said, “I haven’t been on the bench as much as I’d like recently, and that’s due to some quality signings, and I sort of forgot what it felt like to be here.

“I came back this evening before the game and I walked out on the pitch and I realised what a massive club this is and I was straight away excited for the game. Its just brilliant to back around and involved. I gave it my all tonight and I hope I did well”.

By all accounts he was Arsenal’s stand out performer on the night, and he was modest about his first ever Arsenal goal too. A thumping strike from 30 yards which fizzed through the grasp of the Shrews keeper was a nice way to get started, but he played down its quality, saying, “I just received the ball, it opened up for me, I thought I’d give it a try and luckily it went in”.

There wasn’t anything lucky about it, power and precision were the main reasons he scored, and it’s nice to see a player willing to take on the shot from distance without fannying about with it too much first. Control, set-up, thwack. Boof, eat my goal.

He also praised the spirit of the side having come back from one goal down.

“I thought it was a massive game for us. Even though you may it was lesser opposition you have to bounce back from a disappointing result at the weekend,  put a statement down and make sure we qualified for the next round.

“We knew we had what it took to win the game, maybe we were a bit sloppy at the back, but we knew we had to stay together, the gaffer said that to us, and we controlled the second half”.

The new boy has certainly given the manager something to think about ahead of the weekend’s game against Bolton, in terms of his options from the bench, and after if he can keep up his record of scoring in every game he starts he’s gonna be better than Pele.

Was at the game yesterday and would like to say that Coquelin was the other stand out performer. He was a real powerhouse in midfield. OK, it was League 2 opposition but he was really strong in the challenges, always pressing and got the ball back a few times. Made a good impression at Old Trafford too and it’s only when he came off that the disaster started….

Gibbs also had a great game, even not taking his goal into account.

Unlike Man Citeh, we have enough midfielders! 😉

He’s certainly better than Theo was when he was that age. He also makes better choices in the final third than Theo does now!

Did you mean to say ‘Frimpong’ rather than ‘This’?

I was a bit sloppy at the back too, but after half time I was ok.

I think more than ever before, the defence must prove its worth. I don’t buy d idea of a defence coach, but leaders must emerge from there. Dat is Arsenals’ current weakest link.

Femi, I feel a bit of a pedantic bastard but I have to ask – why do you feel the need to put ‘d’ in place of ‘the’ and ‘Dat’ instead of ‘That’. Are you in that much of a hurry you can’t place an extra three letters into your sentence? Castigate me too if you wish but it just bugs me. Sorry.

The Taming of the Shrew with cast members: OXTAIL, YOSSI and GIBBS with support from Miquel and the CoQ. I was at the game last night and my personal observation of the game was as follows: Gibbs in the first half had a “soon come” attitude but he scored the opening goal, JD was overshadowed by Miquel ( Hope he is fast tracked into first team) Ju Young played his first ever game for Arsenal… he was nervous, but found his way after 35 minutes and he made some excellent runs in the second half. (Watch the game online). In… Read more »

yep, “super quality” alright…… in that game anyway. He clearly has massive potential. Hope he fulfills it and doesn’t end up all banjaxed *touching wood*

Blogs, if wenger calls it a day, i want you to take over. We need to use the control, set up, thwack. Boof, eat my goal method as much as possible. I look forward to watching Theo doing this in training, getting the thwack & control parts arse upwards. . . .

I’ll make him do it for hours until he gets it right. And if he can’t I’ll flog him to Man City for £50m and get someone who can

“flog him to man city”… lol I guess Barcelona has competition in buying ex arsenal players.

Ha ha! You mean flog him to man city for £50 million then get in someone for peanuts who has the potential to do it properly in a few years. . . . Then send him out on loan. . .

[…] Chamberlain spoke of his happiness to have started, and so did Ryo Miyaichi. Can’t say I saw much of Miyaichi in the highlights though, so no […]