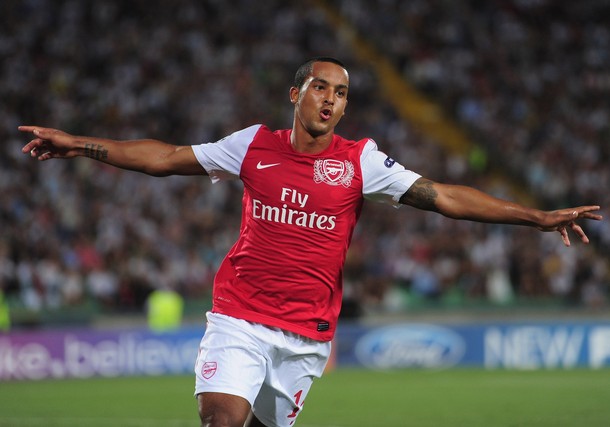 Last night Alex Oxlade-Chamberlain earned the plaudits on his Emirates debut, putting in a swashbuckling second half performance which helped Arsene Wenger’s next generation of starlets overcome League Two side Shrewsbury Town.

Of course ‘The Ox’ isn’t the only 17-year-old to score his first Arsenal goal in the Carling Cup having been snapped up from the Southampton Academy. Back in 2007 Theo Walcott scored in the final against Jose Mourinho’s Chelsea in a fractious showdown which eventually ended in disappointment for the Gunners.

Reflecting on the experience of having huge pressure heaped on him from a young age, the now 22-year-old England international told Arsenal Player that he would always be on hand to help his younger teammates deal with the demands of top-level football.

“It’s always difficult. Jack has had it, and will still have it as he’s only 19. Alex has just joined as well, so they’ll be comparisons between me and him, but they are dealing with it and I am always there to help anyone out.

“Obviously having been in the situation I’ve been in, having gone to a World Cup at such a young age and being in the England set-up, it has come naturally to me.

“Hopefully they can deal with that, if they see the way I’ve dealt with it perhaps that can help them out.”

Having been at the club since 2006, Walcott represents one of Arsenal’s longest standing first team players, a fact which has not been lost on him, despite him conceding he is not a natural leader on the pitch.

“I feel like one of the older players, even though I’m only 22, because of the experience I’ve had and the amount of time I’ve been around as well,” he continued.

“I don’t feel any pressure to lead the team or anything like that, but I think it’s important to have a lot of leaders on the pitch.

“I probably wasn’t that type of player a couple of years ago, but that’s a side that has changed.”

why is he talking like hes the finished article? hes not even close!

You’re dead right! “Hes” just like your spelling and grammar: he needs to improve a great deal.

How petty do you have to be to type a post, in reference to someone missing an apostrophe out. The only thing that needs to improve a great deal Fatty is your Troll factor. Honestly some of you people beggar belief.

fatgooner, technically it’s only my grammar then. there was no spelling mistake. FYI, i went to a GRAMMAR school so i probably understand the concept of spelling and grammar better than you, i just don’t feel the need to type like i’m writing a dissertation when i’m commenting on an article on arseblog. sort yourself out, you fat cunt.

Yeah good point Joe but he (injurys aside) he has coped well with the pressure when you compare him to some of the scumbags of the game like Rooney cheating on his pregnant wife or good ol’ JT fucking his team mate’s/mates wife.

Why wont Walcott learn to Control the ball and dribble without runnin off and leaving the ball behind before helping the “younger” ones grow?.. Cos i think hes still growing up

Why does everyone always slate Walcott?? He’s had to learn to be a winger, which he admits isn’t his favoured position but during that time has scored important goals and given a good return in this and with his input too – particularly for using his talent of pace. So lay off the guy as he’s tryign to be positive, recognizing he’s not seen as a leader but being willing to help new ones to the fold and giving advice where it may help. Start supporting your players – there’s a lot more in the team who could have serious… Read more »

Johnnyboy
Reply to  5am

completely agree, you’d think walcott was like a spurs player with all the hate around him. personally i really like him, i think he adds a lot of pace to our game and is a threat even when we’re getting pushed back, because he can go on the counter and score regularly

what no one has said
Reply to  Johnnyboy

I really really like him because of how humble he’s been. Personally, if Arsene Wenger had the choice to buy either C. Ronaldo or Walcott with everyone having full knowledge that they will turn out like their current selves, I would prefer Walcott. Honestly, being a fan is not all about winning; it’s also about having actually pleasant people in your team.

But if Wenger could change Ronaldo’s attitude into one with more humility then that’s another thing.

Here here. We have a lad that’s had to deal with a LOT of pressure since he was 17 and he’s offering to help the kids we’ve brought in. Did he ever have that? The lad is pure class on/off pitch, so what he’s not always on form but let’s face it none of the team are save Sczcesny.

I’m still standing by my original predicition that when someone finally has sense to play Walcott as a striker we’re going to see something a la Henry.

what no one has said
Reply to  northerngoon

I do believe that Henry wasn’t as pacy as Walcott in his earlier days and that he could dribble more than Walcott could. If that isn’t the case and you have a video of Henry playing like Walcott in his off-days then please upload it somewhere, I’d really like to see Henry being human, like us, to be honest.

He’s right, definitely not a leader. It would be better if he just shut up and got on with what he is paid to do.

I don’t think making a few comments in an interview is particulary distracting is it? You’d be the first to moan if the players never said anything. He’s 22, get off the lads back. I swear some of you just moan for the fucking sake of it.

Isn’t that just the problem though? Few of the players want to be leaders — they’d rather hide in the background. ALL our players should be leaders. It should be drummed into them.

You can’t make someone into a leader. By the very essence of drumming something into someone, you make them a follower, so that doesn’t really make sense. Natural leaders are very much just that, naturally gifted at it, for some it comes easy, its just the way they are. I think thats what Theo is alluding too here, when he says he will try to help wherever he can, he recognises he’s not one of lifes natural leaders – but very much a team player, in that he will give advice and help where he can, I can accept that.… Read more »

what no one has said
Reply to  Padwoir

Being the archetypical ‘football leader’ a la Roy Keane or Patrick Vieira is difficult for many, but then again those two aren’t the only leading frontmen of leaders in football. Cesc isn’t as vocal but was an excellent, driving captain who just lacked the other sorts of ‘leaders’ that would have complemented him. Can you imagine a team of 11 Tony Adams on the pitch shouting at each other for conceding that throw-in? That’s just stupid. For a system involving people to work, a mix of personalities will bring the best of each other. Where one fails, another can shine… Read more »

Leave Walcott alone he’s the leading scorer this season for us so he’s doing his job. If the defense would sort their shit out then he wouldn’t have to be worried too much on defending. Or put him in the striker position.. Playing a long ball game to a Walcott and chamakh partner ship would be far more effective then keeping possession, pass side to side and then eventually cross it to a lone striker and never score.

He doesn’t want to be a leader?
Must have been a completely different Theo Walcott we saw giving a right bollocking to Jenkinson on the pitch at ManUre the other day then.

My mistake, thought it was this one.

Arseblog,
What has essentially been the difference between Arsene and SAF?
Both are great managers in their own way but the biggest difference, apart from country of birth, is that SAF has managed to freshen up his backroom staff over the years.
I am a fan from back in the late 70’s and respect Pat Rice (fellow NI / Irish man and all) and acknowledge his capabilities as assistant manager. However the game has changed and evolves continually. Maybe the management team can alter its dynamics and add Steve Bould as a defensive coach.

I shudder at the thought of Joey Barton nearly joining Arsenal, and moan at another player injury. | Being Arsenal FC Bystander

[…] 22 but is already one of the longest serving Arsenal first team player right now. However, he has offered his assistance to our young gunners, which is generous, yet at the same time, presumptuous. Walcott rates lowly for me, because he […]