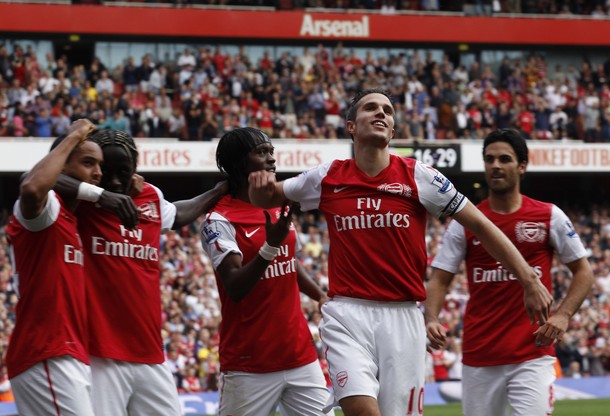 Arsene Wenger has revealed that his persistence with a 4-3-3 formation is not based on maximising the potential of Robin van Persie, but rather a strategy which best makes use of all his attacking options.

The Dutch striker has been in top goal scoring form in the last eighteen months, notching 26 goals in his last 31 appearances and in the process becoming only the 17th centurion in Arsenal’s 125 year history.

Paying homage to his captain’s latest landmark achievement, Wenger explained that his protégé was the epitome of what it meant to be an Arsenal striker .

“He is a true Arsenal striker,” explained the coach to the Arsenal official matchday programme. “By that I mean that he can play in midfield or as a centre forward. But what makes him so special is the intention of his movement round the box.

“That’s a real quality. The timing of his movements around the box are absolutely exceptional. So if you are a good midfielder, you are guilty if you don’t find him with a pass.”

While many Arsenal fans have called on Wenger to revert to the 4-4-2 formation of the ‘invincibles’ era, the coach maintained that while Van Persie could thrive in any circumstance, his decision was based largely on the qualities of his other personnel.

“He has done well up front since we have switched to more of a 4-3-3, but I must say that I don’t play this system just to suit Robin, because I’m sure that Robin would be just as suited – if not even more so – as a second striker.

“He would score maybe fewer goals, but he can play with a real target man without any problems. But the players we have in the squad suit our formation. The players we have around Robin – whether that’s Arshavin, Gervinho, Walcott, Chamakh – they are not purely target men.

“So at the end of the day we have top quality players who are wingers, and once you play two of those, it’s difficult to add another striker up front with Robin as well.”

I just dont get it. If RVP could be better as a second striker and we do have options to complement him up front the why are sticking with the 4-1-2-2-1 (as I see our formation). i would be really excited to see Theo and RVP up front with RVP in the Bergkamp role and theo in the Thierry and Gervinho making runs like Ljungberg used to make.

I agree raio, shitmakh is a target man no? And arshavins arsenal career was ruined the day he was stuck on the wing, it doesn’t suit all our players

All the players he mentioned would be better suited to 4-4-2.

why play chamack in rvp’s place upfront as the one striker, he had 1 actual shot last night and still put it 6 yards wide olympiacos had nearly double the amount of efforts on goal which shows the supposed striker (chamack) and rosicky ,arshavin weren’t doing their jobs , defensivley we were shaky but second half apart from that bloke who hit the bar we defended better as a team ,but the set pieces defensivley were a joke, not marking and falling asleep that was their game plan so why didn’t somebody sort it out? oxo kid looked good santos… Read more »

I think a rough translation might be “Fuck! How did i end up with so many fucking wingers??? “

Doesn’t really make sense. We’ve ruined Arshavins career by playing him on the wings (anyone remember him in Euro 2008?!?!), Walcott believes he’s more comfortable on the wing. Chamakh is purly just a target man ONLY. I see why 4-4-3 could be useful. It let’s more attacking players be on the pitch at the same time but then again we often play with two defensive midfielders so isn’t that a 4-2-1-3? All very confusing.

I mean: Walcott believes he’s more comfortable as a *striker

Wengers stubborness is leading to his downfall!

Park could bang in goals all day if van persie was behind him.. We need a finisher because van persie would be way more dangerous picking the ball up from deeper…

Our 4-3-3 formation fits our outfield players well…it just doesn’t always help us when we need to buckle down defensively in midfield…against the likes of ManU for example.

[…] with one eye on the weekend’s fixture against the scrums. However, he persisted with a 4-4-3, explaining it is the best system for our players. Chamakh came in for RVP, the Ox for Walcott and […]

So frustrating it almost hurts. Basically he’s saying well I’ve bollocksed up and yes I know it but I’m far too stubborn to change things.

I almost start to get off his case and then the stupid ass hat comes out with this crap.