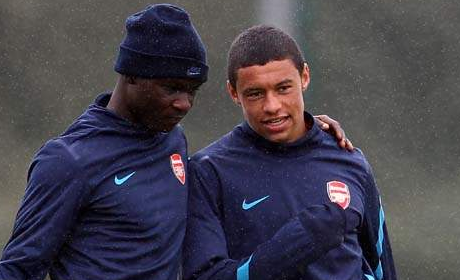 For the majority of Arsene Wenger’s tenure as Arsenal manager, the Carling Cup has been used as something of a stepping stone for youngsters seeking to break into the first-team, with Cesc Fabregas and Jack Wilshere perhaps the two most profound examples of players who were provided with their first competitive action in the competition.

Last season saw the Frenchman deviate from that policy somewhat, with considerably fewer youngsters called upon, and a far greater number of more experienced first-team members deployed instead en route to the Final which, needless to say, was lost in cataclysmic circumstances.

Almost seven months on from that fateful day at Wembley, the competition returns next week, with Shrewsbury Town the visitors to North London for a game in which the League Two side will be seeking to cause what would be a remarkable upset.

Wenger now has a decision to make with regards to his team selection for this fixture. Will he call upon the youngsters again or will he instead turn to some of his first-team regulars? The likelihood is that it will be a combination of both.

There will certainly be some players on show in a week’s time who will be desperate to prove that they are of the calibre to make a breakthrough in the near future. Carl Jenkinson falls into that category, with the full-back eager to put the harrowing experience of Old Trafford behind him, whilst fellow summer signing Alex Oxlade-Chamberlain has found game time hard to come by so far this season, and will be seeking to prove his worth with an impressive performance.

The prospect of Oxlade-Chamberlain on one wing and fellow speed merchant Ryo Miyaichi on the other is an intriguing one, but their youthful promise will be complemented by some relative experience with Lukasz Fabianski set to start in goal and Ju Young Park likely to be afforded a start up front as he begins the process of adapting to English football.

Ignasi Miquel has drifted out of the first-team picture a little in recent weeks following the acquisition of Per Mertesacker, but the young Spaniard could be in line to start against Shrewsbury, partnered by either Johan Djourou or Sebastien Squillaci.

With a lack of further options, either Andre Santos or Kieran Gibbs will start at left-back, with Francis Coquelin likely to be deployed in the holding midfield position. A more experienced creative force, such as Yossi Benayoun or Andrey Arshavin, may also be called upon, whilst the bench is likely to be a similar mix of youth and experience with Benik Afobe (if fit) and Oguzhan Ozyakup likely to be joined by several members of the first-team squad.

It is unlikely that we will see a side of a similar average age to the one that trounced Sheffield United in this competition three years ago, with Wenger instead poised to use this fixture as an opportunity to provide game time for both fringe members of the first-team squad as well as youngsters yearning for competitive experience.

The selection process may yet alter should Arsenal progress and will be dependent upon who they face in the latter rounds of the competition, but this is not a game to be taken for granted, and with all those involved eager to impress as they seek to earn further chances, a lively, spirited and determined performance can be expected from whoever turns out in red and white.

Can Chamakh finally score his second goal of 2011 against Shrewsbury?

All back to the Roxy by Oxford Street after the game?

Well wasn’t his last against orient ?
About his level

Chamakh didn’t look too bad when he came on at the weekend against Swansea; a huge improvement from the Liverpool game when the ball just bounced off him and he just kept falling over.

Fabianski is not Flappy anymore. I personally think that at this moment he would be the #1 if not for his injury

no way! SZCZ is clearly number 1, he’s an amazing keeper

The invincible arse
Reply to  Nasri

Fuck off if your first name is Samir.

It is likely that maybe tomorrow will be Thursday. Possibly.
Having said that, I did enjoy reading. So thanks.

That would work, if we sell Jenkinson and Squillaci to free up three million, then use some of the Emirates loan cash, and we should buy Hazard. We really need to buy Hazard it will solve all of our problemses.

Hazard is, I believe, cup-tied. And we just got Jenkinson, if I’m not mistaken, so let’s give him a chance. On the other hand, let’s dump Squillaci–if anybody’s foolish enough to buy him.

The invincible arse
Reply to  CAGooner

Chamakh has had some game time at least, I think we will stark with park up front!

[…] about it for today! By the way, have a read of Jeorgebird newest article regarding Carling Cup’s selection, it’s pretty well written, and jeorgebird as always provide an excellent insight into […]

Please, get rid of Chamakh! Give Park a start!!

Robin
Reply to  J I Ask

Chamakh was great on the weekend. I think he is finally coming back up to his best… slowly though

What about Chuks Aneke? Surely he should be in contention……

A draw in Dortmund, that’s enough right? A bright future with the Reserves! | savagegooner

[…] match was also an audition for some, with the Carling Cup tie at home to Shrewsbury next week. The likes of Oxo and Miyaichi are likely […]

I always enjoy watching us in the Carling Cup. They’re nearly always fun to watch (aside from the final last year) as everyone we put out to play in them usually has a point to prove. A motivated Arsenal squad is a deadly one.

And as a miscellaneous comment, I also wold prefer to see Park at striker instead of Chamakh. His youtube clips (and I know, that’s no real way to judge a player) look an AWFUL lot like Henry’s before he came to us…not trying to hype him up or anything, but it’s fruit for thought for sure.

Agreed, they are really exciting prospects… This is the life of the Arsenal Fan: “I cant wait for four years time, when our side finally matures!” Would love to see ryo and the ox feature in proper games this season too though. We finally have a first team composition that would benefit, and not terrify, a youngster such as them.

Was reading some comments and saw the one about fabianski being no. 1 if not for his injury! You wanna check your co2 meter pal because you sir are high. You not think that szcz has filled a long needed to be filled gap.

I hope Wenger goes back to his old policy of playing the kids and reserves for the Carling Cup. I know a trophy is a trophy and we desperately need one, but it’s never been considered a priority in Arsene’s tenure and I wouldn’t want this competition affecting us in the other competitions. Easy to say now, but if we weren’t so hell bent on winning the CC last season, would are spectacular crash after that would have happened? Well, probably, but let’s blood in some of these newbies and youngsters and if they make a big impression in the… Read more »

I know this only the fourth week of the season.Aready markers have been set. In truth while MU/MC/Chelsea can slug out for the epl and cl trophies,the gunners will happy to lift the FA/CC trophies. This fall from the heights has been on the cards for the last five seasons. If the defensive display against Dortmund is a sign,then I will be happy.Of course many things canhappen from now until March. The ugly British bulldog who is unstoppable at the moment,could be due for a reality check soon.Hisscoring touch could desert him or he could be injured.Yeah I know he… Read more »

I hope Terry Henry makes a play for the end zone and scores a few points for the team.

I am way stoked to see if our new Goaltending acquisition David Seachild will halt the enemy.

Don’t get me started on that Denny Burke-kamp. That dude is raaaad!

chamberlain and chu young has to start and they will start. i think frimpong will play holding midfield. santos most likely will play too. chamakh need a goal for his confidence and he might not get a better chance than this. djourou and miguel at the heart of our defense.