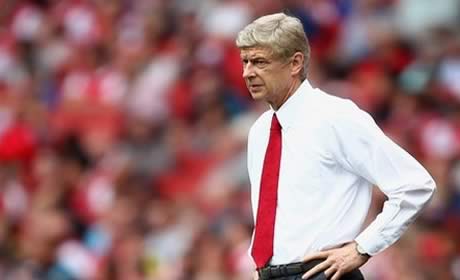 Arsene Wenger says that nerves played a part in Arsenal’s first league win of the season. It’s hardly a surprise when you consider Arsenal have won just 3 of their last 15 league games and looked as confident as a hunchback dwarf with buckteeth and a pus filled wart on his nose approaching a hot girl in a nightclub to ask her for a dance.

A team short on confidence will struggle, regardless of the opposition and that was clearly a factor today. Speaking after the game Wenger said, ” I think we started quite well but slowly the nerves took over. You could see in the second half that we just wanted to get over the line and we didn’t make a mistake.

When you don’t win you have a deep problem, that’s for sure. The longer it lasts, the deeper the problem becomes. As soon as you win things are different”.

The boss was pleased with the debutants, both Arteta and Mertesacker played the full 90, with Wenger saying,  “Mertesacker was calm and composed – he just needs to adapt to the pace of the game. He looks very intelligent in his positioning.

Arteta played very well, especially in the first half. In the second half it was more difficult for him but you can see he will give us some technical security that this team needs and wants to play like we play”.

And the beleaguered Arsenal manager sees some light at the end of what has been a particularly brown tunnel.

“We know that confidence goes quickly and comes back slowly. For us to be in the situation we were in, we were not used to that. We will come back.

“You look today with the fact we had no Gervinho, no Song, Diaby or Wilshere. We now have a decent squad overall when everybody is back and we have chance. First we just need to put a few wins together”.

Meanwhile, one of the new boys, Mikel Arteta gave his reaction to the win. Speaking to the BBC, he said, “It was important for us to get the 3 points and we’ve done it. It was important to get the points today and forget about what happened two weeks. We’ve done it, we’ve got a big Champions League next week so let’s focus on that.

“We had the chances early on to get the game in our hands but didn’t take them. Credit to Swansea, they played really well, it wasn’t easy, just glad for the debut and to get the points”.

The victory will be a welcome boost to the club and to fans (apart from the ones who are unhappy that we didn’t win enough by more goals so we could get the bonus points).

“The victory will be a welcome boost to the club and fans (apart from the ones who are unhappy that we didn’t win enough by more goals so we could get the bonus points)” – genius Mr Blogs. 3 points is 3 points perspective please people. Come on the arsenal

C’mon the arsenal, a wins a win and will give our lads the morale boost that has been much required!!

the nerves took over? oh please, aw should just stfu until the board grows the spine to fire him. that performance was horrid. would rather play well and lose so at least I can say I saw a good game of football. never get my moneys worth with wengers arsenal 🙁

Sure your a gooner? Sound like a spoilt little rat bag Chelsea fan to me.

3 points is 3 points, the team were not great but they battled well, defended pretty well and ground out a result (even though the goal was a little *ahen* fortunate! Also don’t forget 2 full debuts today and a sub app from Yossi, these guys need time to gel with the squad. Be grateful we won and have hopefully lifted our recent aversion to winning!

A good team can play bad and still grind out a win. We did that today which is far better than letting them tie it up with 5 mins left and only get a point.

Only One
Reply to  Corey da Gunnah!

“would rather play well and lose” BOLLOCKS !!!!

Are you Na$ri in disguise?

Wasn’t a pretty victory, but at this point in the season and with the struggles the team have had, we as fans should be thankful for a win.

Why does Arsené keep talking about Diaby as though we would be winning everything with him playing? It’s like saying “If only that broken VCR I have in the loft would work, I could watch this really grainy copy of Basic Instinct!”

I think that if a hunchback dwarf with buckteeth and a pus filled wart on his nose actually got into the nightclub then he should have a fair deal of confidence in getting the girl to dance with him. The metaphor is therefore a bit silly.

Getting the three points was the imperative today. It was close, but job done, the team can all come together in training this week. I look for this team to improve game to game as everyone gets used to each others’ style and the new boys get used to how the Arsenal want to play.

Yeah, and let’s pray the Manchester clubs are peaking too soon! erm, um.

I think Man U is looking REAL good at this time..I think too good, and–as good a team as they are–it won’t last and a reckoning is coming.

Finally the first 3 points this season. A welcome sight. Now the CLeague game. Come ON Arsenal!

Like it or not this is going to be a slow hard journey back up the table. It’s all very well racking up the goals and playing with confidence at the start of a season, but it’s where you are at the end of one that counts. Ramsey, Arteta, Frimpong! That’s who we had out there today in place of Cesc, Wilshere, and Song. Hell, we couldn’t even play Gervinho (suspended) nor Park (train-lagged). Next week we should have Song back and we’ll be a week closer to getting Wilshere and Vermaelen out of their skiboots and into the team.… Read more »

Sorry, a Merson? Arsenal legend Merson?? HIs comments post- Man U were totally legitimate. Even Neville wa upset to see such a lack of organisation. No one should be questioning the Merse’s totally justified comments.

Have vermaelen and wilshire gone skiing? wtf is going on!!!!!!!!!

Oooh Arsenal FC!!!!! so if any mistake didn’t occure,there will be no goal. pls we didn’t expect that,gunners use 2 be a very technical,experience & strong team.common guz let’s be sincere 2 ourselves,3 point is 3 point we all know, but stumbling 4 just one goal with new boys swansea is unfair.Now tell me how can we compete, like this? Is’t very bad,though our defense did quite good with per being experienced, but our left back leaks so much, gibbs is easily beaten oooh!!! why not try santos in second half.did anybody watch man huu march,with much creativity 4 goals,… Read more »

Santos looked like he was having trouble staying awake!

I am having trouble working out the mixed messages from what I’ve read here . . . .
. . . so what are you saying ? Is the Quadruple still on, or what ?

Shocking idea. but maybe AFC would be better off with a manager other than this one, who employs a totally redundant style of play? Cue furious abuse from the AKBs…

When utd win those kind of games they get praised for their ability to win ugly or get 3 points when they don’t deserve it. Thats a champion team they say.

When we do it we have to defend ourself! Even to our own so called fans!

3 points is good period. Imagine what we could do playing well

mike g
Reply to  The Giant

wenger out! this results are not acceptable!

Umm, you’d rather we dropped points? That’s the only alternative to this current result.

Some people lose sight of what this game is about. We won.

You have to praise the character of the team, to come back from a mauling and get 3 points. IMO, it’s not like it’s a switch, where you can detach yourself from the emotional impact of an 8-2 loss. Professionalism aside, they’re only human too. 3 points and a game at a time…

Glad we got the win. Despite the recent lift from the transfers, the team certainly needed a boost on the pitch and we fortunately got it. It’d be horrible to imagine the reaction if the result was anything other than a win. On that pessimistic note, I do agree that Wenger sends out mixed messages like spam mail. One day it’s ‘the confidence in the dressing room is fantastic’ and the next it’s ‘the nerves took over’ or what have you. Arsene is the only coach for Arsenal for the foreseeable future, but questioning the team’s consistency in form is… Read more »

We won « Arseblog … an Arsenal blog

[…] Arsene said: We know that confidence goes quickly and comes back slowly. You could see in the second half that […]

[…] Le Boss has spoken after the match, and admitted we did look nervy in the second half. […]