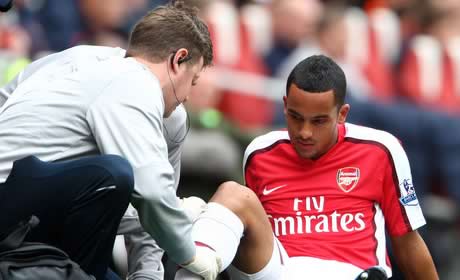 Think of the Arsenal medical centre and for most Arsenal fans it conjures up images similar to those of the men who went over the top in World War 1. Bodies lying everywhere; pieces of limbs strewn around the place; battered helmets and Abou Diaby shuffling mournfully from one side of the room to the other, his right ankle replaced by a pram wheel. But nothing could be further from the truth, and there’s evidence to prove it.

Speaking to Arsenal.com, physio Colin Lewin said, “There is a perception that we suffer a lot of injuries and it takes our players a long time to come back. The evidence is different. We don’t suffer from more injuries, on average, than any other team.

“There is a lot of official UEFA evidence that has been going for many years, to which we participate. This is scientific, published data and when you see this data our injury rate is approximately in the middle of the table”.

Which, unfortunately, tallies with the team’s on-pitch performance at the moment. Sorry, I’ve never been able to resist the easy gag.

As Arseblog News exclusively reported back in June, the club have made significant investments at the training ground to aid player recuperation, including the contruction of a new building to accomodate equipment for long-term injury rehabilitation. Lewin says the support of the club shows they’re serious about improving what is perceived to be a poor record when it comes to injuries.

“It’s a multi-million pound investment”, he said, “so just goes to show that the club is right behind us when it comes to the best healthcare for the players. We do everything we can not only to treat the injuries, but to try and prevent them in the first place”.

The club’s attempt to have Ryan Shawcross banned from life itself fell by the wayside so they’ll have to come up with better ideas. In the meantime, as evening falls, the pitiful squeak of Diaby’s wheel is the only sound you can hear.

Arteta: We have to live with defensive injuries

I hear Diaby has his own wing in the new centre.

They’re going to build a statue of him in his honour outside the entrance. He will be in crutches in the sculpture (obviously).

It may be true that we suffer the same amount of inurys as other teams, bu what fustrates me is that with us it is mainly key players, and with other teams its reverves/ subs that mainly get injured.

Do you have evidence of that? Genuine question.

We have a tendency to play our key players, when they are fit, more than our shit ones. Ergo, the probability of them getting injured is higher than the ones that sit around playing Playstation all day long.

Really? I don’t believe other clubs best players stay injury free unlike ours but more a case of strength in depth of the squad…just an opinion

All the best 2 diaby en jack, wishn them quick recovery

—In the meantime, as evening falls, the pitiful squeak of Diaby’s wheel is the only sound you can hear—

Ahhh I’ve gone and spat me tea all over my keyboard, classic finishing sentence!

Other people would know more than me, but do we have a smaller squad or at least s smaller nucleus of players that we choose from so that Arsenal’s injuries have a proportionally greater impact than other clubs?

Nail on the head there mate.

Fact is we don’t have quality in depth to replace our ‘not injury prone’ players…
Chamack for RvP anyone?Or Squillaci for Verm or Kos?Thought not…I’m just praying Robins fitness (and great form obviously) continues…

Arsenal injuries are now referred to as Diaby-ilitating injuries…

No need to apologise, it made me chuckle!

I’ve never head a pun so sad yet so funny.

What i would like to see is this report Mr. Lewin is talking about.

Not sure Lewin’s answers aren’t a touch disingenuous. We may well have the same rate of injuries as others. It’s just that when our players get injured it seems to not be minor (on many occasions despite what we are told/the M*A*S*H* team at London Colney say) – Diaby, essentially 5 years, Rosicky 2 years, Walcott, RVP, Vermaelen, Wilshire, Djourou, Afobe, Eastmond, Gibbs, now Sagna too. Maybe Diaby is a Python devotee and is simply replaying his favourite scene from The Holy Grail (“It;’s only a flesh wound….”.). Either way, the medical team don’t seem to get the joke. Oh… Read more »

I strongly believe our injury runs is not particularly unique to us,but our problem in depth & in qualify amplify our injury streak.I can’t just picture this arsenal team without RVP,believe me that would give similar effect in our team as if messi,xavi&iniesta were injured @ the same time in barca!

Next week: Diaby’s wheel gets a puncture.

“It’s a setback, but we have invested 8 pounds and 75p in the finest puncture repair kit that Halfords offer and we’ll keep working towards his recovery.”

I’m a bit late to comment on this but… We seem to get more injuries than everyone else but stats don’t lie. I guess the perception of getting more injuries comes from 2 things. 1. We have some players with niggling injuries so it seems we constantly have injuries. 2. It’s possible that we get bigger injuries than other teams so we pay attention to them more ie Ramsey and diaby legs breaks. Could this be down to the fact we play possession football so our players are on the receiving end of a lot more tackles because we have… Read more »

After 5 years of injury bollocks, it just really gets to you and it becomes quite normal really. The other season Inter Milan got a lot of their key players injured and I found myself calm and unsympathetic. I’m convinced if we were one of the top teams to have the biggest number of injuries, we’d be playing Lansbury or Frimpong in the PL last season. Evidently, our most obvious injuries are: a) Tomas Rosicky (long-term) b) Theo Walcott (Recurring) c) Cesc Fabregas (Recurring) d) Vermaelen (Recurring) e) RvP (not anymore recently) f) Diaby (Forever) It’s because of the recurring… Read more »