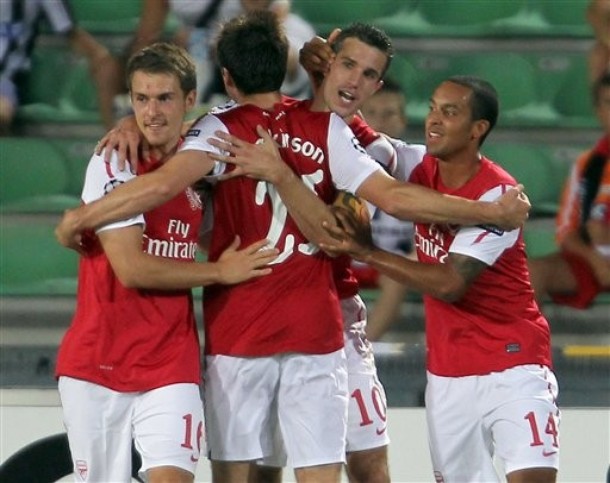 Only 18 months ago Carl Jenkinson was standing in the crowd at the Emirates (“sit down over there…”) watching the Gunners with members of his Arsenal mad family. Now, despite being sidelined with a knee problem, he’s a major player in the firs team squad. He is living the dream, and on a day-to-day basis he still seems to be pinching himself.

Take for example these lovely comments about Robin van Persie, club captain and idol to millions, with whom he found himself sharing an ice bath after the Dutchman’s brace against Sunderland. A man-crush perhaps?

“I was in the ice bath with him after and really wanted to say to him that he’s the sort of person that makes it so special to play for a club like Arsenal – but I bottled it!

“Robin is the kind of guy you dream of playing with, doing things like he did against Sunderland, and I’m awestruck at the things he can do with a football. I look up to him so much – he always brings me under his wing and gives me little tips, which I really appreciate.

“It’s just an honour and privilege to play alongside him if I’m honest.”

Having put in a swashbuckling shift against Marseille in the Stade Velodrome, Jenkinson was warmly praised by supporters for laying down a clear marker of his improvement since moving from Charlton in the summer.

While his crosses were dangerous it was his high-energy levels and constant charges up and down the right wing which particularly caught the imagination. Touching on his all-action style with the official matchday programme, the 19-year-old revealed a family-history of high stamina.

“My dad used to be a runner! He tells everyone about how he ran with Sebastian Coe so I guess it’s something in the family. I guess my fitness is one of my main assets – people at the Club were quite surprised when I came top in the running in pre-season but that’s a strength of mine so I have to use it to my advantage.”

I love having proper Gooners at the club.

You need to stop swooning else youre gona hurt yourself…

I can’t help it. I bet Jenks swoons at him too. Someone should make sure RvP knows this (what Jenks said.) It’s very important that he knows what he means to the players as well as the fans. Other professionals want to be around a player of his quality he’s special. It’s very important he stays. Jenks crush on Robin is so sweet. “Robin is the kind of guy you dream of playing with, doing things like he did against Sunderland, and I’m awestruck at the things he can do with a football. I look up to him so much… Read more »

I also had an ice cold bath once with Van Persie and the boys, laughed at Nasri and co….then fell off my bed. It was all a dream.

And was Walcott in that race?
He sure is a good buy. Love his confidence particularly.

He bottled it, just like every other Arsenal player 😉

Clearly he’s not an Arsenal fan. Don’t waste your time.

I was actually surprised at jenkinsons pace in marseille.. Arsenals gotta have a good sprint coach cos he wasnt running that quick 2 months ago..

Is it just me or does Jenks remind you of Oleg Luzhny (before he joined us) what with his galloping runs up the wing? Great player.

I wonder if Robin only ever puts his tip in, or if Jenks will one day get it all!!

Fair play to Jenkinson – he overcame initial nervousness (and who wouldn’t be nervous to come in, as a Gooner, to play for Arsenal), and put in a top notch display against Marseille. And when Djourou came on to replace him, he was pretty tidy too. And Djourou was good on Sunday too Maybe, just maybe, its coming together at the back. I’d like Santos to get more game time to get him to settle into the system, because he looks like a proper ‘man’ at the back. Didi anyone else notice Samir Nasri when he came on for Citeh… Read more »

Hope City buys Chamakh too. They need him because he played for the mighty Arsenal.

Can we lay off slagging Chamakh please? The guy is having a rough enough time of it as it is, and I am certain that no-one is more aware of it than MC himself. I don’t think slagging him off on our own forums actually helps matters.

Great to see so many players at the club who WANT to be here. The youth team kids like Frimpong and WIlshere seem genuine fans, as is Mertesacker, and Gervinho and Chamakh have both spoken about their dream to play for Arsenal for years. TV seems committed, and RVP regardless of his contract, has a Cesc/Thierry-like relationship with the club (probably more like Henry). Other kids like Ramsey, Gibbs, Song (still only 24!) Chesney and Theo are probably going to feel a certain affiliation. The more gooners in the team, the greater the likelihood they will push themselves further.

I’m mortified I got a low comment rating !! I am truly mortified!! people don’t get a little camp humour these days!!

Just wasnt funny, awful in fact. You need to get yourself checked.

What is this “running in pre-season” of which Jenks talks? And was Arshavin told?

Can we please resign RVP?

You just know Jack, Frimpong and others will get hold of this interview and will take the piss. Usual banter etc. 😀

He’s so likable though, bless him…

Another dog turn signing, and – of course – you all know it.

[…] to YoungGuns, Nico Yennaris is slated for his debut, and set to feature at right back, as Jenkinson remains out injured, while Ignasi Miquel, who has been decent so far in his first teams forays, is set slot in that […]