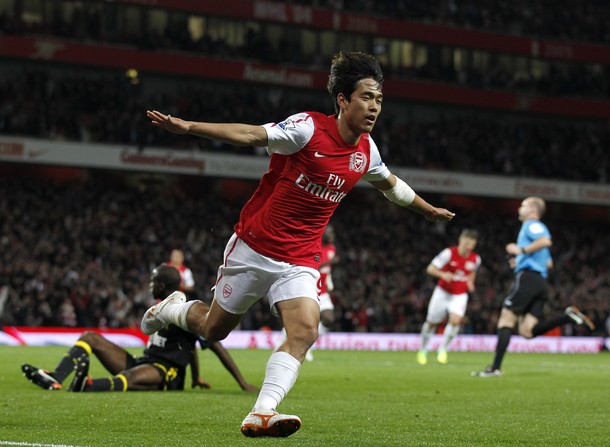 Apologies for the late post, I’ve only just got back from the Emirates.

I’ll keep it short and sweet…and bullet-pointed. Because everybody loves bullet points.

Here’s what Arsene had to say on the evening’s action:
“In the first half I believe we had the chances. In the second half we were caught straight away losing the ball in our own half and they scored. From then on of course they tested us. The more experienced players then took charge of the game, especially Arshavin, Park and Benayoun – they made the difference.

“I have to congratulate the team because we had two young full-backs who are usually central players. In midfield we were very young and we have shown good spirit against a good Bolton side.”

Meanwhile, while Sky try and scare the shit out of everyone by spinning a ‘Vermaelen injury-scare’ line every fifteen minutes in glorious HD, it’s worth noting that Wenger has played down the Belgian’s tight calves:

“He did very well. He had to come off for a minor calf problem but I hope it’s not too bad. He will be a bit short for Saturday, I don’t know yet what I will do. We have to test him tomorrow, but it doesn’t look too bad.

“He has been out for a long time, he had only one training session yesterday with the team. I didn’t really expect a game of that intensity, it was a tough one for a centre-back. They put us under pressure in the second half and the intensity of the game was very high.

“We don’t think it is a calf strain, it is just tight calves. He has not played a proper game for two months. He wanted to come off. In fairness I did not want to take him off because I thought it was too stupid now with four minutes to go to concede a goal. He was adamant he couldn’t go on so I hope it’s not too bad.”

There were no way 56,000at the emirates last night club level looked about 1/3 full and they all count as sold and there were huge gaps at the top of the upper tier. Shame for a club with a waiting list of 80,000 people for season tickets when the new stadium was built not to be selling out games.

Good result to come from behind. Im sure once theyv finished installin TV5’s calf upgrade hel be ready to give T*rry & the chavs a lesson/pastin this weekend

Another game another win! Enjoying the morning after again 🙂 so glad Wenger has got us back on track!!

I was there. And I think this report is bang on the money. That is all 🙂

Did we play the standard formation or 4-4-2?

Great victory for us. Park is doing well after two games. It will be sad if he does good and then have to sell mainly because he would be 28 and in his prime. Hopefully the South Koreans will see that Park plays for the Arsenal and give him an exceptional athlete pardon from the army. 🙂

@arsenalkid is there such a thing as an exceptional athlete pardon?

All South Koreans must go for military training, mainly because of tensions with North Korea. Park has not gone for this military thing, so he has to go at 30.

Then there was the case of the 2002 WC team that went up to the quarter-finals. Due to this achievement, the government pardoned them, just like how they pardoned other athletes that won medals.

This probably only occurs in South Korea, or maybe Singapore too if I heard correctly.

You’d think they’d at least let him delay it until his mid-30s or something. The career of a footballer is very short in the scheme of things, and Park has limited time in which he could still make serious money. I’m surprised they don’t have some kind of tax they can apply in lieu of serving – if they took a million pounds off him, for example, I’m sure it’d be put to better use than wasting an exceptional talent in military service.

Nope doesn’t happen in Singapore – all our athletes have to serve 2 years of conscription from the time they are 18, which, if you ask me, is why our football team languishes in 131st place on the FIFA rankings

After watching Parks goal again and again, I have to say its a finish very similar to the ones Freddie used to provide.

a bit of henry in there as well

I agree, Henry more than anything! Let’s not get too excited just yet though hahaha

Yeh, I thought it looked familiar. An Invincibles type goal. Used to see Dreamy Bob, Henry and Freddie do that quite regularly. It’s very welcome indeed.

Arshavin = on/off switch.
Tonight he turned on for a while.

He played in his preferred position and was MOTM. I think a 4-2-3-1 formation with Gervinho, Arshavin, Walcott and van Persie would scare a lot of defences. Give Chelsea a work out too as there could be lots of interchanging

It would leave Terry (not) screaming racist things at them. Because Terry, as stated several times is (not) a racist.

Park or Vermaelen would have got MOTM for me. Arshavin was terrible for the majority of the match. While that’s fine against a Bolton team that wasted about 5 decent chances, against Chelsea we can’t afford to give the ball away as much as Arshavin does.

it’s good to see Verm making sure that he manages his return intelligently.

Just watched the goals on the Arseblog video site. I must say, Park took his goal very, very well – aimed outside the far post, curling inwards…just a special goal. Over the last few years I have gotten accustomed to our non-RVP strikers smashing the ball at the keeper. I’d forgotten what a proper striker can do.

You must of missed Bendtner curling several in beautifully.

I was there too and this is a very accurate report…….. I thought we played well tonight considering the team we had out, but Arshavin is the most frustrating player to watch 85 minutes of total garbage and 5 minutes of pure brilliance!
Great support tonight especially for a carling cup match.

Then went back to huffing and puffing and managed to get knocked out by a stray elbow…from the referee!

If I were a smoking man, I would be lighting a nice cigar right now. Whats not to like about tonight ? A win, a confident display by the youngsters and fringe players, Park scores (great goal and do we finally have someone who isn’t afraid to have a pot from distance ?), Arshavin does his usual Arshaviness, (but if 5 minutes of brilliance is enough to win the game – then that will do for me), 7 wins in 8 and into the Quarter finals. On to Chelsea and if we can get a decent result there, then maybe… Read more »

*words to that effect. Not ‘or that effect’. What can I say its really late, mong hat is well and truly on.

We shouldn’t talk about corners until we have a trophy.

Sometimes it feels like Wenger has just taken over, based on the comments he makes. He’s so passive. Looking forward to the new era, whenever that begins.

OOOH to be a gooner this lovely morning in Nairobi Kenya! COYG!!!!

Sky / Fox Sport can fuck off. I would encourage everyone to cancel their subscriptions so these criminals don’t get their hands on your hard – earned. It only encourages them otherwise.

Would you mind filming the match for me then please?

I just love these mornings after a good win. Credit needs to be given to The Boss though, for helping to pick the boys up and winning a string of games.. Imagine what the media would have said if it wasnt Arsene anymore at the helm? Better days.

[…] For some bullet points from someone who was there and saw the whole thing, check out the report on Arseblog News. […]

another win. damn. wenger is so lucky!

pity ryo didnt get to play more. he looks like he could develop a good understanding with park!!

[…] Arsenal fans will be have been happy to see Thomas Vermaelen return to competitive action last night in the 2-1 win over Bolton. […]

We Love You Park, Park Chu-Young, to the tune of too much too young.

alright, now I’m convinced Park knows where the posts are in England. I say play him often now boss. At least, unlike uncle C, he does know how to get his shots on target.
And…well done boss for turning this team around.

Park now has to be ahead of Chamakh in the pecking order.

How did Arshavin play off the striker? Why don’t we play him in that position more often?

He’s not got the stamina for the center, nor does he keep possession well (tries low percentages passes too often). Both leave us open to too many counter attacks.

All the creative formations that have AA23 central are, for me, options when a goal down with 12 minutes to go. Or against lower division teams. Otherwise, suicide.

Martin Keown is my hero
Reply to  Burt Reynolds

I was at Ireland v Russia and Arsh was the MOTM. He was well up for it. The Russians seem to give him free reign and he thrives on it.

[…] the struggles of putting picture to commentary, I did say we just about nicked it. Here’s a match report by someone who was at the […]

no-one’s mentioned it but after seeing the game, i was really impressed with bennayoun’s tackling – no nonsense tough stuff from a guy with a slight figure. Far superior than likening to Helb in manner of playing style.

Bennayoun was brilliant last night probably MOTM for me, he had great movement on and off the ball played well in defensive and attacking positions the whole game. Didn’t run head down into the corner like Hleb either!
Brilliant signing.

I keep forgetting though he’s only on loan, so won’t be eligible nxt wk…..

I’ve always thought about why Arsène doesn’t play Arshavin in the hole behind RvP. I think he would be much more effective there than on the wing. Perhaps its because that is Ramsey’s best position as well… I would like to see a lineup with Gervinho playing in the right wing, Walcott on the left wing, RvP as CF, and a midfield of Song protecting the back four, with Wilsere (Ramsey) linking play and Arshavin just behind the striker. Regarding the match, I’m quite hopeful Park will get his chance on the PL really soon. However, i’m also a defender… Read more »

Martin Keown is my hero
Reply to  Franconyl