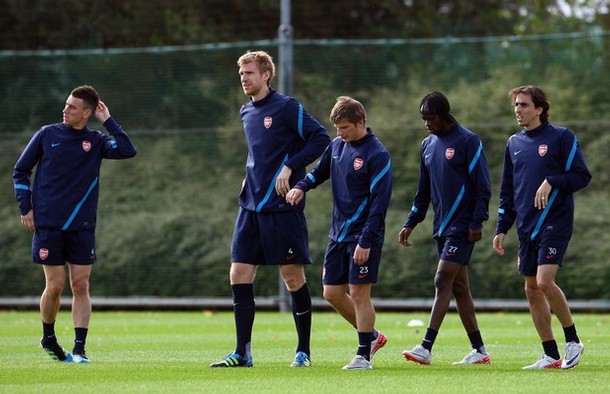 Per Mertesacker has again spoken of his long-standing admiration for English football and confirmed that Arsene Wenger has been trying to sign him since the World Cup in South Africa.

The summer acquisition, who has previously revealed that he owned an Arsenal jersey as a teenager, confirmed that only an injury crisis at former club Werder Bremen denied him the chance of playing for Arsenal last season.

Speaking to journalist John Cross in the Mirror, Mertesacker explained: “I was at a good club but Arsenal was another step for me. It was my wish to make it happen if everyone could agree.

“It nearly happened last year but I talked to the manager in Bremen and he stopped it because they had too many injuries. But we stayed in contact for a long time and that’s why I’m sure he wanted me for a long time.”

“England was always my favourite football land and if ever there was a chance to come to this country then it was always going to be to sign for this club.

“England is the motherland. Everyone in foreign countries speaks about English football. It’s famous. All the best players come here.”

Mertesacker, who is expected to line-up alongside Alex Song on Sunday, played against Spurs last term in the Europa League* but expects his first North London derby to be a completely different affair.

“I’ve heard a lot about the derbies, especially Arsenal and Tottenham. I’m looking forward to it. I played at White Hart Lane for Bremen in the Champions League. It’s good that I’ve played there but I think it will be different on Sunday.”

*A Thursday competition for teams who aren’t that good.

I simply love that picture of Per and Arshavin next to each other, it looks like a Dad taking his young lad to school. Mertesacker is fast becoming the rock of the defence, we’ll need all his experience tomorrow in what will be (fingers x’d) the game that truly kick-starts our season.

NOTE: Tottenham hotspuds are not in the Champions League

Apparently Silvestre helped persuade him to move. I’m guessing not by using his mouth.

I like The Mert. People says he’s slow etc but he’s our Stopper. TV5, Kos and now Song are the boys at the back who come out and make the pass. Per is a defender. Simple as.

He reminded me ta5 at times the other night, have a feeling the bfg will do fine for us.

Positionally he reminds me of Bouldy, who was hugely under-rated, largely because his positioning was so good, he rarely needed to catch the eye with last ditch ‘heroic’ tackles. Unlike that Ubercunt John Terry who is, in fact, a shit defender.

Yeah I totally concur with that, Bould was a giant for us, he saw the danger most times long before it actually manifested, his postioning like you say was top class; if Per has anything like the Arsenal career Bould did, I think we can all start to feel all warm and glowy, commencing now.

Maybe having him last year could have made the difference in how we finished in the league. I think his experience with organisation will be invaluable this season.

Anyone else noticed that Harry redknapp is always talking about arsenal. Why?
Such a cunt.
Per is quality. Just needs to form a partnership with tv5 and were good.

Because he’s a twitchy faced cunt

come on mate, i hate arry, he’s the enemy now, but his twitch is due to a serious car crash.

Hmm, a couple of years gone I saw his sharp-suited nipper with the carpet chops on Sky reminiscing about when ‘Arry used to take him to see The Arsenal every weekend.

None of this matters. Nothing we say can be anywhere near as bad as waking up every morning and finding he’s managing Sp*rs is for the poor bastard.

Agreed. He’s been whoring himself for the England job since he took over down the road.

Power shift in north London? Pull the other one!

[…] on to other news, Mertesacker has let known that Arsenal were close to signing him last season, and if only that had happened. Oh well, better late than never. The self-confessed Arsenal fan has […]

Like to see Santos and Gibbs both play think they could be awesome.

Could be a better bet than a perenially lazy Arshavin.

Agreed, the fact that because he can read the game that well and his positioning and calm head is awesome because of tha,t he doesn’t need to be rapid to make amends. Great defender, very happy with him so far

he is huuuuuuge LOL

Don’t b knocking Europa League……..it myt b where we play next season……IF were good enuf.

*A Thursday competition for teams who aren’t that good.

THAT was fucking brilliant.

It was indeed. But I’ve got a really nasty feeling that it isn’t going to be funny come the end of the season…..

look at gerv’s hair the soft cunt….shave it off you receeding cunt or get the rooney job done…its looks daft as fuck gerv u bellender

This Mert guy really loves Arsenal, I hope he scores against the spunk today, those wankers!

Now I blame Bremen for what happened last season.

Come on you gunners i hope our away support is at it brilliant best today let’s stuff the scum and it might stop arry from wanting more air time. Ps away support make sure you don’t get looted down that shithole today