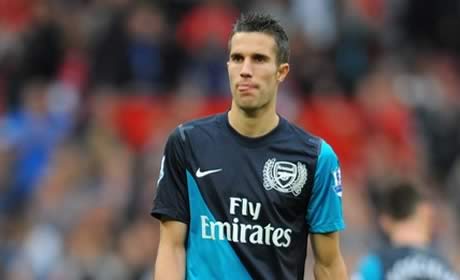 The BBC are reporting that Robin van Persie has opened talks with the club about a new contract.

With just over 18 months left on his current deal the captain could force the club into a difficult position next summer, leading to a Nasrification of our transfer business.

The news is encouraging but talks are simply that at the moment. Fingers crossed though!

Amazing to think that one decision – one signature – could define the forthcoming years.

Sure, no player is bigger than the club but, right now, RVP is “mes que un player”.

Great news, am still a bit worried though as Nasri entered contract talks this time last year with the club and look what happened!! Then again Nasri is a Cunt!!!

i can wait to see VANPERSIE sign new contract in arsenal……
GREAT NEWS……
please give him them pen to sign…….

Get in!!! Sign up Robin… just the boost our club.needs

Never mind all that shite in Brussels about the future of Europe – THIS is the only negotiation that matters.

Did anyone else see Nasri “starring” in Citeh’s Carling Cup squad, in front of a near empty Molineux last evening? That’ll be 25 million squids to you sir. And fuck you very much Citeh, for your custom.

Ha! The deluded fucking mug. To think he used to be a contender in a proper football club…

the cunning part of this is that once RVP gets a £100K+ per week deal signed, we’ve either sold everyone who’d need more or signed them (well, the Verminator) on long term deals already

blogs, ages ago you posted a pic of some kind of bunker/dungeon in which rosicky signed a contract extension

i wonder if the same approach will work with RVP, or if he’ll be wined and dined in the diamond club

That really did look scummy

This is the turning point – we’re back!

Who would have guessed – it’s only weeks since ‘that game’ – Manu would be humiliated at their ‘fortress’ and RvP would be negotiating a new contract.

New contract is a win-win 4 both side. If he sign a lucrative contract and stay fit with the current form, arsenal wins. If he’s injured afta contract, he wins. Delaying contract 2 luk 4 greener pasture 4 a player wit his injury record is risky for him. If he’s injured, no team will sign him & arsenal wont give him beta contract. I pray he signs and stay fit. Long live RVP, long live Arsenal

I don’t know why you’ve used correct grammar with things like “he’s” and then, just a few words prior spelt “look” as “luk”.

But your points are valid.

According to reports TV5 had a word…..

Come on Robin make my week!

knees down. lets pray. and hope…

He knows in his heart that he owes Arsene so much for sticking with him through all of the injuries, same with Ramsey.

Eduardo was just unlucky that it took him so long to get any confidence back after his injury but i’m glad he’s back on track now. A transfer back to the Arsenal? i can only hope

Amazing what a few wins and the sky not falling in will do!

Great newz bt nt yet excited until he signs. My fingers are crossed

Give him whatever he wants.

Until he signs said contract, I christen him RVPNDP.

Normal procedure to open talks with a contract than has less than 20 months to run.

I wish so many people wouldn’t label RVP as injury-prone. He played pretty-much a full season in 2008-9. And the 6 months he was out in 2009-10 was due to a rubbish tackle in a friendly against Italy which could have happened to anyone. Yes, he was also sidelined for two-and-a-half months in 2010-11 due to an ankle fracture against Blackburn which, again, could have happened to anyone. These aren’t hamstrings or muscle tears or general gimpiness. So back off. Besides, I’m sure one of the reasons he’s in any way loyal to the club is down to how he’s… Read more »

The bbc news story has changed……

‘The Gunners have not yet officially begun negotiations with Van Persie, the only current player to have won a trophy with Arsenal.

It was that they were in talks, i guess not

The most fabulous news… Well second most fabulous after him signing. I love RVP everyone on the team needs to peer pressure him to stay. Tommy Gerv and Jenks have done their bit everyone else needs to start talking about how much they love and need him!

He’s not in contract talks, what a load of rubbish. This is just propaganda from a site that is starting to stick it’s head up the club’s arse. How many more of Wenger’s lies are you going to fall for?

At no point does this story even mention Arsene Wenger. What are you on about?

That’s where you got the story from, Wenger’s mouth – where else did it come from? Wenger said the club is in talks with VP, it’s not – there’s a contract lying there unsigned somewhere, and it will stay unsigned. You can call that “talks” but lets not pretend VP will be anything other than out the door if this club continues to display such lack of ambition.

Earlier on the BBC Sport guy tweeted that the club were in talks, I reported that. I didn’t get anything from Wenger’s mouth. I have since updated the story to reflect that.

As for your comment about the site having its head up the club’s arse, well that’s just nonsense.

Well you’re better than some but not exactly impartial – this story and headline is sloppy and misleading.

This is a site run by arsenal fans for arsenal fans, is it really unreasonable that it may not be totally impartial and err on the positive side?

No one is asking you to read this blog. I happen to think it’s great as it’s by a fan and not the media paid to wax lyrical about a, b & c

You could always fuck off back to whatever forum you always troll if you happen not to like things here.

Shame on the shite media namely Sky et al.. VeePee is signing afterall. That Dein guy needs to be watched closely though. 😉

Poor reporting by the BBC. Headline originally read “Robin van Persie opens contract talks with Arsenal” and then in the body of the copy it says “The Gunners have not yet officially begun negotiations with Van Persie” – Very contradictory there!

I just checked the story again, they’ve changed the headline to “Arsenal expect to re-sign Robin van Persie”. Very different kettle of fish I’m afraid. Hope he does sign though.

Seriously, just pay him the going rate of £200,000 a week to keep him, he’s worth it, and I’d rather have him then 3 players mediocre players.

So basically spend £10.4 million…. and how many years? 4-5? That makes it between £41.6 & £52 million which wouldn’t include the bonuses for goals, assists, appearances, etc…. . Now take this off the funds in the account and ask Wenger to buy other players without complaining that they aren’t world class and that he has to unearth another diamond in the rough before any other team gets there first, not to mention the other players that they will want to sign new contracts. The reason we have a wage structure in place is so we can stay competitive but… Read more »

This is how AW should negotiate contracts..
“hello …….insert player name here…
AW: What’s the difference between a Ferrari and knife?”
Player: what?
AW: I’ll give u clue, one of them isn’t in my pocket, now sign the fuckin contract”

Simple.
By the way this also works in chatting up birds.

Stupid BBC. It felt like the best news of the day till the time i read ‘update’.

Robin will resign if we pay him 100+ per week. I think the most important thing for him is that we build a great squad. Sitting on 60mil is not the way to do it.

Glad the team is playing better. That will help as well. I just don’t think Robin will be happy with a 4th place finish. I think he just like others who have left really want to win trophies. Our team is not deep enough or talented enough to win EPL, or Champions League. We have the money to fix that so let’s do it.

There have been many distractions of late, but it is important to never forget that nasri is a cunt.

@TexasGooner6 “Robin will resign if we pay him 100+ per week” How do you know? Seriously, how do you know that piece of information that you state as fact? I suspect you don’t. The £60m line is getting a bit tiresome too. As has been stated often enough by others, that gets you one ‘world class’ (or mediocre English) player, once transfer fee and wages/bonuses have been budgeted for over the length of a contract. That money will get spent. There is no real business case for sitting on a cash surplus (Apple are in a similar position, albeit with… Read more »

“Give him whatever he wants” – isn’t so simple. We need him to help us secure champions league football next season in order for him to sign a new contract. He is our talisman now more than Fabregas ever was, AW only gave Fab the captaincy to give him a sense of belonging. I don’t think Fab would of ever belonged 100% due to his desire to return to the motherland, which is understandable. RVP is a different type of man, he’s home now and I don’t believe he would be so adored anywhere else than here with us. Personally… Read more »

Team news for match against Chelsea | Being Arsenal FC Bystander

[…] is also whispers that RVP is in talks about a new contract, again, great! But, so was Nasri, for the best part of 6 months. So we can in talks all we want, […]