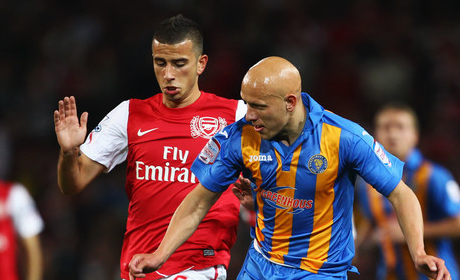 Loan spells can prove to be the making, or in some cases, the undoing of a potentially promising young footballer.

Jack Wilshere and Wojciech Szczesny, for instance, had their causes for first-team involvement considerably strengthened by stints at Bolton Wanderers and Brentford respectively and are both now, when fit, part of Arsene Wenger’s first choice eleven.

Contrastly, Mark Randall, after a few first-team outings, struggled to impose himself during a succession of loan spells and ended up leaving the club in the summer with just 13 competitive appearances to his name.

There are several youngsters in the Arsenal set-up currently who are likely to embark on their first stints elsewhere later this season and, from their point of view, they will be hoping that they follow the path trodden by Wilshere and Szczesny, rather than the one undertaken by Randall, who now finds himself languishing in League One with Chesterfield.

No extended loan spells are likely to be undertaken until the club’s participation in this season’s Carling Cup is over, but two individuals hoping to experience competitive, professional football, probably in League One initially, are Oguzhan Ozyakup and Chuks Aneke.

The pair are currently the stand-out talents in the club’s Reserve side, with the former often creating goalscoring opportunities with his impressive technical ability, and the latter possessing a range of skills as well as increasingly potent knack for finding the net.

Both have also demonstrated their adaptability in recent weeks. Ozyakup, who has generally been deployed in a deeper midfield role since joining the club in 2008, has been afforded opportunities as a ‘number 10’ in recent weeks and has thrived, whilst Aneke has also undergone a role reversal, but in the opposite direction, going from an attacking midfielder to a more defence-minded one.

The ability to operate in several different positions should serve them well when the opportunity for a loan spell does eventually arise, as it would make them of greater use to any potential manager wishing to sign them, whilst also increasing their chances of game time.

Both players came on as substitutes against Shrewsbury Town in the Carling Cup victory last month, and Ozyakup made something of an instant impact, teeing up Yossi Benayoun with an astute pass for the third goal. The Dutchman, who was signed from AZ Alkmaar and looked to be on the brink of leaving the club last summer before agreeing a new deal, was also an un-used substitute in the heavy defeat to Manchester United at Old Trafford earlier this season, and has begun to train with Wenger’s side on a more regular basis.

Aneke, a product of the club’s Hale End system, was a key component of the side that retained the Premier Academy League title in 2010 and his partnership with the currently injured Benik Afobe has caught the eye for a number of years. Now 18, Aneke is a much more tactically aware player and has also become more effective when electing whether to go for goal himself or seek out a team-mate.

The duo will be hoping to be involved at some stage when the Carling Cup resumes with a home game against Bolton later this month but they will both know that the real hard work, and the potential barometer of their long-term Arsenal futures, will come out on loan.

Nothing wrong with being in League 1. If Mr Jenkinson is anything to go by, you stand a good chance of getting picked up by Arsenal.

I certainly hope Chuks makes it to the first team… just for the name. All I care about anymore, buy players with fun names Arsene!

the only sam is nelson
Reply to  joakal

Bring on the Chukas, looks a quality player. Oz of the girls and 1 cup will just want to go Barca soon as he gets his first start, so not bothered about him

Good luck to both of em. Two cracking lads with real potential. I hope to see both these lads as well as Kyle Bartley playing for The Arsenal in years and for years to come.

Shame we haven’t brought Kyle back what with all the injuries.

Bartley has been injured as well, if they were even able to recall the loan

I didn’t realise but thanks

Has anyone seen my coat?

if things keep going the way they are with injuries, we’ll soon be relying on our youngsters to get us through. i know its been said before but i do really hope wenger has a few nice surprises for us in jan :-). fat chance tho i rekon!!!

Chuks Aneke is also an anagram of Skunk Ache, with a spare e. Spooky!

the only sam is nelson
Reply to  Midfield Corporal

i always had a soft spot for ian ure who despite being a terrrible centre back (at least so i’m told, he was before my time). after all, that’s a. urine which is quite magnificent.

chuks just gets better and better. let’s hope his rise to the top isn’t confined to crosswords and he kicks a few stoke monkeys over the stand in the next few seasons as well

we should be talking about loaning out ramsey instead of anus cheeks.

Speaking of youngsters with bags of talent, anyone catch the England U21 game just now? wouldn’t usually be interested but Alex was on fire..

A hattrick, two of them peaches, the third was especially brilliant. He’s “super” quality, easily the best in the U21 squad at 18, big, big future and very glad Arsene signed him.

Hope they come out of the reserves hot and ready, and gel into the first team at the go!

I hope Wenger sticks with the Young Guns throughout the whole of the Carling Cup campaign. The first team already has a mountain of work on their shoulders and the CC should be a showcase for our emerging talent even though it is probably the trophy we stand the best chance of winning. But fuck it, we are the Arsenal and the League Cup is and has never been the priority. However, if our kids make a decent run of it, I’ll be happy and encouraged by that.