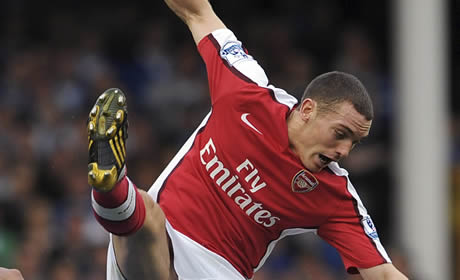 Arsenal have announced that occasional central defender Thomas Vermaelen has signed a new long-term deal with the club.

There had been speculation in the media over his future as he, like Robin van Persie and Theo Walcott, had less than two years left on his previous deal. However, the Belgian has committed himself to the Arsenal and will hopefully be the first of many to do the same.

“I am really happy to have signed a new contract with Arsenal”, he said. “I always had the intention to stay here. I feel there is a big belief in me from the club, from the boss and from the fans and that is one of the reasons why I stayed.

“Arsenal is a fantastic club. We have great supporters, we’re doing well financially and we are playing with some quality young players now and they will develop, which is very good for the future”.

Manager Arsene Wenger is happy with the news, probably because a player out injured signing a new deal is like two new signings, and he said, “We are absolutely delighted that Thomas has signed a new long-term contract. Our plan is always to sign top quality players and with Thomas extending his contract, we have done just that.

Thomas is a special player, who has always made a huge contribution on the pitch and we are looking forward to him being a part of our future at Arsenal”.

Vermaelen is expected to return from injury at the end of this month and may be in contention to face Chelsea at Stamford Bridge.

Looks like we’ll get our money out of that shiny new medical centre for years to come! The Verminator will almost certainly be following RVP and moving right into their new home.

Good, really good. Let’s hope his injuries are behind him.

It was 7:21 on my end. The time stamps on the comments confuse me sometimes. 12:48 Ooooo I’m late for class! Still great news no matter what time of day it is. Yay!

Good news and it’s a start. Now we need RVP, Song and Walcott to sign. I still think RVP might wait until the summer though unless Wenger signs some top talent in Jan. Hazard, M’Villa and goetz then RVP might sign. Let’s wait and see.

Whats the basis for thinking he will sign those players in Jan? I’d love it, but think there is 0.00001% chance of it happening.
Else he might of done it during the 3 months summer transfer.

This is exactly why he should have been made club captain ahead of Van Persie, that and he is in general a better leader. 100% committed. No questions. No doubts. Contract signed.

This is wonderful news. I believe Robin van Persie will follow soon. VT has always been my favorite player, him and the German in the team will really improve our team.

Guess this is the upside of our best players having long term injuries – they won’t leave us. Hopefully he’ll get fit now and stay fit.

Do wish Wenger would give it a rest with the variations on ‘like a new signing’ though. It’ll crop up again in Jan no doubt: ‘We have already signed Vermaelen’.

Brilliant news. Now let’s get RvP to sign a new contract too, and let’s sign a few quality players to compliment them.

What?! Good news!? That’s something we don’t get a lot of these days. Really looking to seeing TV5 in the red and white again. And although I’ve been quite impressed Per-cielny, I still think that Per-maelen is going to be quite immense!!! COYG!!

I happen to think Koscielny would get the nod ahead of Mertesacker, think we should let our big man slowly get used to playing at the faster pace of the league, still looks kinda out of sorts to me at the moment

I think Koscielny is very under rated by most fans but he’s been consistently strong. He reads the game so well. It was that one mistake at the carling cup that keeps people wary of him. GET OVER IT PEOPLE. He’s clearly a top player. His partnership with TV was fantastic. And will be again when TV is back.

Yep, I agree with you more than I do with Arsenal Bystander and Sabrina because Kos can play very well for a few games and then put in an absolute shhh preformance, Blackburn is the latest which comes to my mind. His positioning to score that own goal, goodness me… You know what, I’d actually play Per-Verm center back, and Kos on the right back, Jenkinson’s defending has been very unimpressive for me so far.

If Santos isn’t convincing at left back over the next fortnight and Gibbs stays injured then we could see a back line of Jenkinson-Mertesacker-Koscielny-Vermaelen.

Actually, I don’t think that would be too bad.

These are my thoughts. You may not agree with them. That is your right.

Fantastic. TV5 is going to be integral to our success over the next few years, once he gets back consistently to normal fitness. On RVP, lot’s of people have been saying that if we’re looking strong (or show intent in our transfer dealings) he will sign, but I wonder what effect another lay-off would have on him signing for us (not that anyone would wish it on him). Perhaps we should have extended him when he was (STILL) crocked last year. I love RVP, but surely he must realise that on actual games played over a season he’s probably one… Read more »

Excellent news! as soon as he is back nxt to mertesacker i think we will look a lot stronger. He was vital to us when he was fit, a real leader. Important sign to send to the rest of the players! Lets just go and win a trophy this year, then RVP will sign an extension, wilshere will be back and vermaelen as well. We just need a FA cup, a league cup or CL. I think we will grab one of the two first ones. tired of the LANS stuff..im over that. Lets back the team and wenger when… Read more »

i thought koscielny looked just fine on sunday. would be nice to think that we had some genuine competition for places in defence and that the league cup could be used to show off a promising newcomer like squilaci, perhaps a savvy team like celtic might like to spend £8 or £9m on taking him off our hands?

another triumph for the youth system!

I guess Kompany did a poor job in tapping him up.

Ok a decent news. Will need diaby to announce his retirement due to injuries to cap off a good day.

That’s a pretty good mix of experienced internationals, great prospects (*) and well Kos is technically quite solid as well as Arteta without the international caps. It is however worrisome how dependent we are on Persie with Chamakh’s phobia of the goal and the uncertainty of Park Chu-Young.

Barring gooner luck with injuries as we’ve had, dare I be so bold as to suggest we may actually have a team deep enough to practice squad rotation this term? Arsene, you cheeky devil. Top four or bust, COYG

Two players for every position is not deep enough playing in 4 competitions and with how injury prone we are.
We still need a bunch in January, unlikely it will happen though.
World class striker, and midfield playmaker.

“occasional central defended”……. Hahahaha you said it. I’m going to go ahead and be the negative Nancy here. I think we should of put his contract talks on hold to see if he could actually finish the rest of the season without another 6 month bid out. There’s no point in keeping the lad if he never plays( ehem park). I swear I’d give my left nut for arsene to sign either hummels or subotic. Anyhow, cheers to Tommy and I hope he stays fit and absolutely dominates at the back for the next 5 years. I can’t take anymore… Read more »

Well hurry up and chop that bollock off otherwise we’ll never get them.

I don’t think we need either of them really. Wouldn’t say no to it but I don’t think our defence is that badly in need of reinforcements. It’s the collective defending, especially good pressing in the middle that we tend to lack at times.