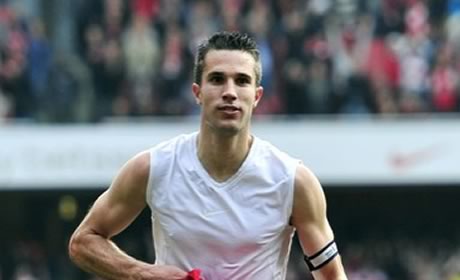 Arsene Wenger was full of praise for his captain after Robin van Persie’s two goals secured a much needed win for the Gunners yesterday.

The Dutchman brought his tally for 2011 to 29 Arsenal goals (+ 5 for Holland) and the manager recognised both his goalscoring skill and his contribution since taking over as captain from Cesc Fabregas.

“I think you have to analyse the game a little bit to see how important he is. The first goal was a good display of the team and the second chance he made the difference just because of his skill, which was exceptional”.

The issue of his contract remains yet the manager has no doubts about his commitment to the cause. “It depends what you call commitment. For me commitment is not about how long you are at a club”, he said.

For his part van Persie was saying nothing about a new deal, but said, “I am committed to Arsenal and that’s how it is. I can see how frustrating it is from the fans’ point of view but I am committed. This is my eighth year here and if you can say about one player that he is committed, it’s me”.

As long as he keeps scoring goals, nobody can doubt that, and if the team can drag itself back into the area of the league it belongs, then some canny January purchases and a run of form might just convince the Dutchman to put pen to paper.

if he’d have me, i’d marry the gorgeous man

I like to think that if there is a god, it’d be a bacon-wrapped RVP.