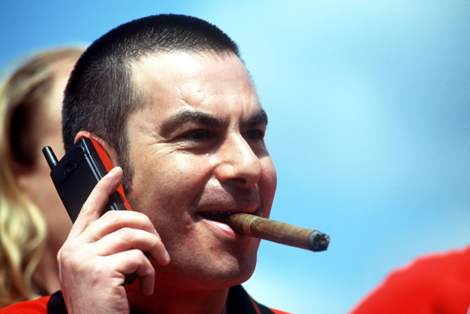 Arsenal have revealed that they spent £4.6 million on agent fees between October 2010 and September 2011, a figure which represents a rise of £1.1 million on last year.

Given the record influx of players during the last transfer window and the number of squad members who have left the club over the course of the last twelve months the small rise is perhaps unsurprising. Indeed the figure is actually £200,000 less than the £4.8m paid out during the 2008/09 period; a sum which led Arsene Wenger to call at the time for a cap on such fees.

Arsenal are by no means the biggest spenders on agents in the Premier League. Figures released this afternoon confirmed (again unsurprisingly) that Manchester City lead the way, while the likes of Harry Redknapp (single-handedly), Liverpool, Chelsea and Newcastle also spent more than the Gunners. The average spend per top flight club works out at £3.6 million.

Arseblog News can’t help but wonder how much Darren Dein has profiteered from moving on player after player from the Emirates in recent seasons. Known to have advised Clichy, Fabregas and Thierry Henry in the recent past, the son of former chief executive David Dein is also Robin van Persie’s representative. A worrying state of affairs.

Shocking that Tottenham is number two on the list, despite spending less than Man United, Arsenal, QPR and Chelsea in the Transfer market.
Give credit to Harry the ‘bung taker’ Redknapp.

Good old ‘Arry, once he’s doing his best to send another club into the red. Good thing they play European football though eh? Oh… wait…

Actually, that’s bad news for Arsenal. Better for our top-four league chances if Tottenham has a busy fixture schedule on Thursdays in the new year.

They went out of purpose.

Fuck Darren Dein, he should be banned from the emirates, I bet he will single handedly manage a move out of Arsenal for RVP, Walcott and Song (who unfortunately he also represents).

Darren Dein is what’s wrong with football, total limitless greed and excess at every turn, what a bloated ego-maniacal son of a bitch he is.

It’s down to the club to show that we have the ambition to compete then those players will stay and dein will get fuck all, rvp et al are not silly if the club signs the right players in January the contracts will get signed if not they have the perfect excuse to leave.and dein will make sure he reminds them of the fact. Agents are parasites the club has to negate the excuses by matching rvp and walcotts aspirations in signing a quality player or two in January. It’s not about spending huge sums just spending what we have… Read more »

I really cant see RVP leaving this club, or Walcott for that matter. Why make yourself a Zero instead of a Hero just for extra cash? Just like Na$ri did in fact.
Nah these guy’s are way smarter than that. They are happy at Arsenal, just look at the way they are playing if you don’t believe me.

He also represented most of the invicibles,dont read much into that agent’s deals

That is a frightening stat’! Surely Agent’s fees only apply if you are the buying Club ? Yes……..???

So how come – given we invariably buy and pay out less, than we get for selling and rake in (and that has been the case for the last 5 years) – that we are paying out more than Utd., who spend more than we do ?

Something isn’t right in the way we handle matters.

Onto a different subject now: In Praise of Theo Walcott

Michael Cox, blogger of ZonalMarking.net, and “chalkboard” tactics contributor to the Guardian as well as special contributor to ESPN’s Soccernet, has written this piece for ESPN.com in praise of Theo Walcott titled.

Wish there was an edit button…

Thanks! Fun reading, and all true. Walcott has improved a lot and he is also benefiting from two things: Van Persie’s finishing and Gervinho’s speed on the other side. Without Van Persie’s finishing we wouldn’t be talking about Walcott’s assists and without the Ivorian’s play on the other side, Walcott would be seeing additional attention from opposing defenses. I remember reading somewhere last year just why Wenger bought Gervinho and he simply said that his style of play would mesh well with Van Persie’s and Walcott. Le Boss, as usual, was dead on. Incidentally, it is rather nice to read… Read more »

Also, funny picture of Eric Hall. Love the sex Pistols, but did this chump ever represent anyone who didn’t play for Tottenham?