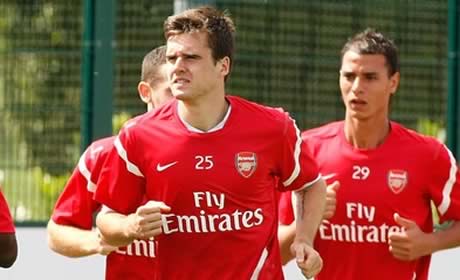 Youngster Carl Jenkinson has been ruled out of tomorrow’s trip to Norwich, and for a number of weeks, after it was discovered he had a stress fracture in his back.

Speaking to the official website, Arsene Wenger said, “Carl has a stress fracture in his back. That’s just about rest now. We discovered that because he had a pain in his back. First you monitor it, then play a little bit and then you check again because you are cautious.

“We found a small stress fracture that we noticed at an early stage. If he continued to play it could have got worse and then he could be out for a long time. So at the moment the specialist has decided to rest him.”

It’s unfortunate timing for Jenkinson who was looking forward to a run of games at right back in the absence of Bacary Sagna, however, he might be thankful that the injury was caught early. Some seasons ago Gilberto Silva suffered an almost identical injury which took much longer to diagnose and threatened his career as well as keeping him out of the side for months.

Jenkinson’s injury is the second full back blow coming after Kieran Gibbs needing surgery for a hernia.

Meanwhile, Jack Wilshere seems to be recovering at the right pace from his ankle surgery. Yesterday he was allowed set aside his crutches, and at his press conference today Arsene Wenger said that Wilshere’s return was pencilled in for ‘mid to late January’. Whether that’s his return to full training or being available for selection though is yet to be clarified.

Arsenal also welcome back Marouane Chamakh to the squad for the trip to Norwich while Abou Diaby has returned to full training following his summer surgery.

Headline for Jenkinson injury: Full back stressed, cause back injury/

The Mid-to-late Jan thing sounds like when Wilshere will be ready to play. He was supposed to return by Christmas, and there’s been no news of any holdup, so that must include a few weeks of training.

Gutted for Jenko – his improvement had been astounding, definitely one for the future. Let’s hope him & Bacs both come back well ASAP.

He has been very good recently, a marked improvement and a Gooner to boot so wish him well and a speedy recovery.

So I’m guessing it’s Djourou at RB until further notice! What happens if he then gets injured, suspended or rested?
Can anybody shed any light on this?
Who played RB against Bolton in the Carling cup?

Kos can play there. So can Coquelin.

I think Nico Yennaris did.

Had an injury like that myself, a stress fracture in the back, caused by too much high intensity training. Was out for 10 months in total. First I rested for 5 months, hoping it would pass by, but eventually was forced to undergo surgery. Another 5 months and there you go, back in training.

Hope they discovered this one in an early enough phase though!

Didn’t Denilson and Gilberto have similar injuries and these effectively ended their Arsenal careers. Fingers crossed, I love this Arsenal supporting lads attitude and ability.

The thing that I noticed about jenkinson at the WBA game (I was sitting in the east stand) during the second half it became obvious that he is a massive talent on his crossing ability alone, I reckon he’ll be back and his future will be very bright.