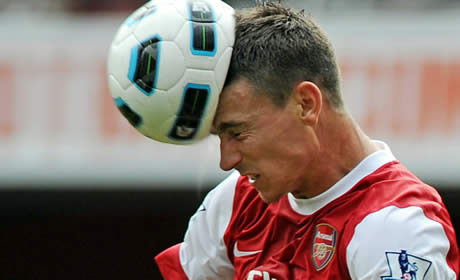 Laurent Koscielny knows he’s come a long way in the last two years, and the Frenchman is taking nothing for granted as his consistently excellent performances make people sit up and take note.

If his first season was encouraging, interspersed with some unfortunate moments, his second has seen him blossom into a very effective Premier League defender. Kos, however, is well aware how quickly fortunes ccan change in football.

“If someone had told me that I would now be playing for Arsenal,” he said, “that I would have beaten Lionel Messi’s Barcelona team and had been called up for France, I would not have believed it. It has been two crazy years.

“Everything went so fast and I know that it could go as fast in the other way so I’m staying very humble. I respect football. If you get carried away, things will get back at you.”

And he puts his recent form down to adaptation to English football and hard work on the training ground.

“I feel I’m in the best form of my life. I’ve improved a lot. I keep working on the basics, my controls and my passes.

“I’m also more rigorous. I make less fouls and get less booked as I needed time to adapt to England. I also cope better with the pressure of playing in a very big club. And I know I can improve even more”.

Koscielny is likely to partner Thomas Vermaelen in the centre of Arsenal’s defence tonight as they take on Marseille in the Champions League.

Highberry
Click to flag and open «Comment Reporting» form. You can choose reporting category and send message to website administrator. Admins may or may not choose to remove the comment or block the author. And please don't worry, your report will be anonymous.

That must have HURT!

Where are you you naysayers who often called him names.. Tuesday Club members I mean you.
Kosser you are a brilliant defender and as Arsene says “You will be world class”.
Just keep on improving.
Glory Days. Up the Arse

That picture is worthy of a caption competition!

Classic, just about spit my lunch out when I read the caption.

Koscielny has worked so hard since his arrival last season. He’s become one of our best and most consistent players. One of the few who has literally bled for the shirt. Some people are still hung up on the mistake at the Carling Cup but he hasn’t let that keep him from improving. Masterclass performances like the one at the Emirates vs Barca and his exceptional performances of of late prove all the naysayers wrong. He has so much confidence. I think he brings a calming affect to the back line. Looking at him now you couldn’t tell just a few years ago he was in the French second division.

I’m a club level member, I’ve never heard anyone speak ill of him. I knew he was young and would take time to settle in. Jenkinson will be world-class some day too.

Support wenger all the way.

Get TV5 back next to Kos, let Mert settle like Kos did, and next year our back line will be a monster

Nice job getting a photo of Kosser at the training ground using the official Arsenal training ball.

Someone has an issue with good deeds and praise towards our players..they are ticking down. Cant please everyone…

I think I know why we sometimes have trouble with defending…

Kos: ” I keep working on the basics, my controls and my passes.”

In this team, a back line with poor control and passing would be catastrophic. Besides, I’m pretty sure Kos knows how to defend

Did you maybe think passing and control are basics for all footballers? Or have you never played the game?

alex2110
Click to flag and open «Comment Reporting» form. You can choose reporting category and send message to website administrator. Admins may or may not choose to remove the comment or block the author. And please don't worry, your report will be anonymous.

* That was for Gooner by the way…

Gotta love a bit of kos, what a beast!

Naija Gunner
Click to flag and open «Comment Reporting» form. You can choose reporting category and send message to website administrator. Admins may or may not choose to remove the comment or block the author. And please don't worry, your report will be anonymous.

Kos you are my guy anytime in the defence, up gunners!

I really don’t get why we concede so many goals as, in my opinion we have the best goalkeeper of the league, the best fullback in Bacary Sagna (get well soon!) the best defender in Vermaelen, although of course he was injured a lot, and another two really good center backs, especially Kos is immense right now and will be even more so in the future. And the rest of our defenders is useful as well. Of course Arsenal has a tendency to concede the most stupid goals, and is generally a very attacking side. But still, with so much defending talent at the club we should start to have clean sheets week after week, like today, very good defensive display 🙂

manfredi
Click to flag and open «Comment Reporting» form. You can choose reporting category and send message to website administrator. Admins may or may not choose to remove the comment or block the author. And please don't worry, your report will be anonymous.

i think our really attacking style of play is the reason..it requires the likes of walcott and arshavin to pace back and forward extremely fast and cover for our backs…

thats hard work, thats why arshavin looks so knackered after 60 mins when he plays.

what we see now is a walcott who is in a massive form, cause he has the speed forward and the power to help defence.

i think gervinho does a better job helping out in the back. I also think its hard for arshavin to pace back and forward. and in past time have a loose canon like eboue (god bless him, he had great days at the club) behind arshavin is dangouros combo..