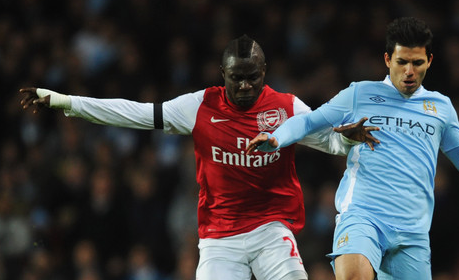 Arsenal’s Carling Cup exits in recent seasons have tended to be tinged with immense feelings of disappointment. The humiliation at the hands of Burnley in 2008, the disappointing defeat away to Manchester City a year later and, of course, last season’s last minute capitulation at the hands of Birmingham who went on to be relegated to the Championship.

Last night’s loss to City, however, evoked different feelings, with many, rather than dwelling on the negative aspect of missing out on a feasible chance for a trophy, instead remarking on the impressive nature of much of Arsenal’s play and, despite a familiar lack of cutting edge up front, an impressive night for several youngsters on the fringes of the first-team squad.

The City game was, perhaps, Arsenal’s best performance in the competition this season, and the three games that the run encompassed, all of which took place at Emirates Stadium, provided a platform for several individuals to bolster their first-team experience and, in some cases, enhance their claims for regular action.

So, who were the primary beneficiaries this time around? Alex Oxlade-Chamberlain immediately springs to mind, with the sprightly winger signed from Southampton returning to his usual impressive self last night after a rather indifferent outing against Bolton in the previous round. Chamberlain forced City goalkeeper Costel Pantilimon into a fine save with an effort from distance and provided a constant threat. This competition has been of particular importance in the embryonic stages of his Arsenal career as, besides a goalscoring debut against Olympiacos and a cameo appearance in the 8-2 mauling at Old Trafford, he has largely been isolated from the matchday squad in the Premier League and Champions League. His performance last night may well persuade Arsene Wenger to name him on the bench on a more regular basis.

The midfield axis of Emmanuel Frimpong and Francis Coquelin also drew much praise last night. There have been murmurings that Coquelin may seek to leave the club in January, but, in light on last night’s display, Arsenal would be best advised to keep hold of him as he complemented his usual ruggedness with a canny knack of assurance in his passing. Frimpong is much adored by the Arsenal crowd, perhaps even more so after his supposed spat with Samir Nasri, but has also undergone an improvement on the pitch during the club’s progression in this competition this season and now appears more assured when using the ball as well as at winning it back.

Ignasi Miquel started all three games, the latter two at left-back and, despite initially struggling against Adam Johnson and company last night, he grew into the match and made several interventions before being replaced by Thomas Vermaelen. A loan spell beckons for the Spaniard, who has now made six first-team appearances, in the New Year.

Other players gained their first competitive action via the Carling Cup this season. Nico Yennaris did himself proud whilst operating at right-back against Bolton, Oguzhan Ozyakup was assured in his two substitute outings, and Chuks Aneke and Daniel Boateng received brief tastes of the limelight.

In all, then, the Carling Cup has not been a wasted experience for Arsenal this season and those that benefitted from it will now be hoping to put what they have learned to good use.

I’m so chuffed at the quality coming through, Arsenal’s kids with a couple of senior players handled Dzeko, Aguero, Johnson, Nasri & De Jong. We could and probably should have won that game but yeah, like you said, this was such a positive performance that I didn’t care. I also thought Miquel put in a very accomplished shift on the left. Our youth system shits on everyone else’s in the EPL at the moment.. the ones in and around the 1st team squad: Wilshere – 19 Szczesny – 21 AOC – 18 Frimpong – 19 Coquelin – 20 Theo –… Read more »

yeah my bad, I also forgot Ramsey, Afobe, Miquel & Henderson; there’s so much to be positive about.

The OX and Le Coq going to be stars, I just hope we get one more of Goatz or Hazard. Then just imagine this line up in 3 years time,

Would still prefer RVP there in 3 years time…

Blogs, thanks for the positive outlook. While being eliminated from a cup competition can be a downer, we have a squad that should inspire hope. We’ve got plenty of football to play this season and no one truly knows how it will turn out.

This post was by Jeorge Bird who regularly reports on his own website about Arsenal’s reserves and youth. So correct credit where it is due.

oh, to be.....
Reply to  StongTackleBacarySagna

The spuds 2-0 down after 15 mins at white yid lane!!!! I’m fucking lovIng this, they are too bad even for the Europa league!

Not disappointed at all – the kids and reserves had the best of that game. Hope to see a similar team against Olympiakos.

So exciting to see these youngsters grow up.

Frimpong, le coq, miquel, JW, Ramsey, the list is so long. So long and full of tomorrows stars.

It might take a season or two, but this youth will see us as the top premier league team that we are for many seasons to come.

Just look at Theo, better every season and he’s 22! its crazy

Would be nice to see a couple of our younger fringe players go on loan to a premiership team where they could get first team football on a regular basis. Maybe ryo and one of frimcoq. Also wondering if it might be possible to secure a work permit for Joel Campbell and recall him as he seems to be scoring fairly regularly for llorient as well as costa rica.

Great talent, the club has a great future but put a top class young striker in there to and we can all be optimistic. We need to hang onto rvp and Walcott and buying a striker will show the club has the ambition in the short term to go with the excellent talent that is coming a little further down the line. ..

let’s not forget afobe. he was on the edge of the first team squad before his injury…

They can’t get rid of Coquellin in jan as i’m assuming he’s cover for song/frimpong for the african nations cup? One other thing we learn from the cup run (and yes, its been said WAY TOO MUCH) we don’t have cover for rvp in the striker dept.

I’m not really familiar with other PL clubs youth set ups but I don’t think anyone can deny our ability to produce player exciting players.

Wenger’s “project youth” may have failed the first time around, but if you think about these players tempered with the experience of the likes of RVP, Song, Walcott, Vermaelen then we might just see some success yet.

couldn’t have put it any better. Cheers.

News on the youngsters, Goetze rumours rumble on and loans in January? « savagegooner

[…] Bird has written a piece for Arseblog News on this year’s Carling Cup run and who has benefitted the most. Worth a read if you’re […]

Im just counting the trophies these generation of players would bring to this club. I therefore blind the eyes of the wizards from Madrid, Barcelona, Milan, Manchester and across London, they shall not behold these ones.