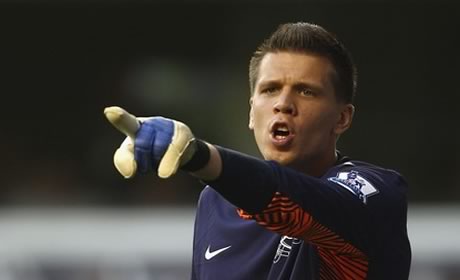 Arsenal keeper Wojciech Szczesny says that the 8-2 defeat at Old Trafford was ’embarrassing’ but brought about a positive change in terms of the how the team prepare for matches.

Speaking to The Times, Szczesny said, “We’ve had disappointments before but that game was the point where it got embarrassing. Looking back, I think it did us a favour because we realised we really had to work much harder, stick together and defend better.

“We always used to train as a whole team. When we did attacking it was as a whole team and defending was the same. Now we’re split into groups and the defence works separately, under Pat Rice. We know our jobs and communicate better.”

Since then there has been an improvement in the team’s defensive solidity, not just that of the back four, and the Polish stopper is quick to credit the influence the deadline day signings have had.

“The manager bought players who have brought back the spirit to the dressing room”, he said. “I think when we went to Old Trafford, we didn’t actually believe we could win. Now, we’ve signed Arteta, Yossi , Mertesacker, who have played at the top for a long time and that’s made a difference.”

And he made clear his affection for Arsenal, having signed from Legia Warsaw at the tender age of 15.

“I love the way the club do things. I’ve grown up at Arsenal. I know every single person on the staff. My best friends work for the club, my best friends are in the dressing room. I don’t have personal ambitions, I just want to win as many trophies for this club as I possibly can. ”

The full interview with The Times can be read here (behind a paywall though).

Legend in the Making?? Already one!

I need a hero!

He will leave by the time he’s 25 or sooner

…and what will I have for Dinner ?

that’s true if arsenal don’t win anything and keep losing their star players.

Arsenal through and through. What a great player.

Hopefully we can matched his ambitions and he stays for his career he will be a all time great for the club.

It’s also good to hear that Wenger although it took awhile review the situation and make chnages which are paying off being adaptable is the key to being successful it something is not working try a different approach.

He’s always pointing in a lot of these photo’s isn’t he?
A “Szcz is in control” kind of image. Great.

He’s right to credit the new boys in making us more of a team, but neglects to mention the large part he had in making their decision easier by ensuring CL football. I can watch that pen save against Udinese over and over again and never get bored.

So Pat Rice does have a job!

He’s got an enormous pair for sure! I’m remembering his penalty shot save in the Udinese game where he talked smack to the penalty taker.

[…] has revealed that the 8-2 at Old Trafford brought about some changes at the training ground. Speaking to The Times yesterday, he said: We always used to train as a whole team. When we did attacking it was as a whole team and […]

From way back when we played against Man utd and lost 1-0 to a deflected ball.
He was in goal and back then he should be our Number 1 goalie.
It took wenger a while to see. But now it is paying of

Wow, that is great news. I really hadn’t thought Wenger would change the training approach. It was obvious that more specialized training was needed.

[…] some typically effusive comments from Wojciech Szczesny this week. The Pole in the goal spoke about changes in the approach to defence in training. Whilst I’m sure a freshening of approach was probably necessary and certainly appears to have […]

[…] about him having ‘it’ I meant it in terms of his goalkeeping but when you reading him talking about what the club means to him he’s got ‘it’ as a Gooner too, which is just […]

With his Premier League debut at Old Trafford and his Champions League debut against Barcelona, it seems like he’s destined to be great.

Brilliant article and what a brilliant chap! This team looks so solid at the minute. Let’s hope it stays together!

How good does it feel to have a solid #1 leading the charge? It looks like this team has the foundation for something special!!!