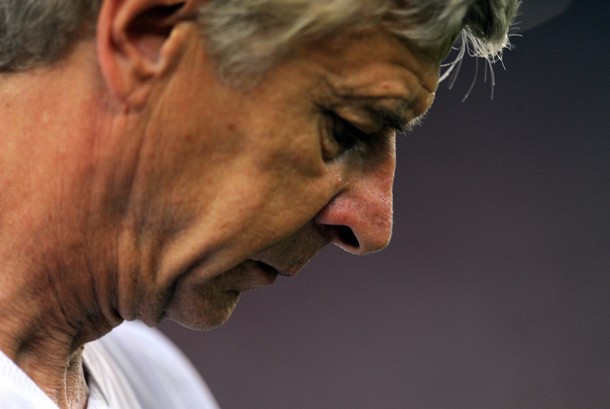 Arsene Wenger believes that the manner in which international sides qualify for major tournaments should be overhauled because the long, drawn-out process is as painful as having teeth pulled out without any anaesthetic.

The full line-up for Euro 2012 will be completed by the end of next week with four play-off ties set to signal the end of a grating two year process.  In the meantime the rest of the world’s teams are being forced to play out meaningless friendly games which will no doubt leave most football fans dozing on their respective sofas.

Asked in this month’s Arsenal Magazine whether it was time for UEFA to instigate drastic changes, the Frenchman answered in the affirmative.

“I would say that yes we need a major overhaul,” confirmed Wenger. “I would propose that we had the smaller teams playing against each other in qualification, with the best ones going through to the European Championships, and that the bigger teams then have the opportunity to be qualified directly.

“Of course I have not studied the problems deeply, so I do not say I have the key for the solution, but there is definitely something there that is not right, and I’m sure that the format as it is now has no future. I think there will be more and more disinterest from people.”

All too aware that supporter attendances drop off when matches do not live up to expectations or are lacking in importance, he continued:

“People want quality, and we saw some games in the last round of internationals – Bulgaria v Wales for example – there were just 1,000 people there. That makes a mockery of international football. So we have to look at that quickly, because it creates a new problem.

“I think it will get worse and worse because we are facing an economic crisis too. That will have direct consequences for the attendances. It’s more and more difficult to sell out games – even in a big country like France. Not one home game there was a sell out – not one.

“That shows you that there’s something happening that is a deeper problem.”

Wenger was designed for Arsenal

truly, when i first started following football, and then arsenal, i thought Arsenal was named after Arsene…
but then i noticed that The Arsenal had a ‘The’ in front of it!

They should expand the main competition to 32 teams. The top 16 ranked teams shouldn’t have to qualify. All the other teams should have a knockout competition to determine who will qualify. With home and away legs it would be sorted over 4 or possibly 6 games.

Arsene’s right, the interlull does suck, I’ve had a boring day, an usualy we’d get up to three new articles on ‘ere. BUT NO, the interlull not only stops real football, it slows arseblognews churning out their everlasting supply of high grade Arsenal crack. I’ve no idea how many times I’ve looked through the thread on the Arteta article. This is all Sepp’s fault, the prick. Anyway, up the arse with England, it’s just not worth it. Untill I see tangible proof that our national set up is approaching modernity fuck it, I’ve never cared as much, an if the… Read more »

I honestly wouldn’t give a shit if international football was done away with altogether. It gets in the way of The Arsenal playing and if I think Cashley and the Non Racist Chav are cunts when they’re playing for Chelski, my opinion doesn’t change just cos they put on an England shirt.

Couldn’t give a fuck about international football.
It’s boring. I can’t bring myself to whole heartedly support an England team with those cunts in it. Waste of time.
All it seems to do is take the momentum out of the season which can be a right pain in the anus when you’ve picked up form. And then there are all the fucking injuries from some no-marks going in too heavy on our best players, in supposed “friendly” matches of all things!
Bring on the real football again.

Sometimes I wish all our players would just sign some sort of memorandum shifting their international registration to Montserrat. Yeah I know, they’re the lowest ranked team by FIFA (not that it means anything) and play an average of 2 games in a calendar year in the sunny Caribbean. That way it would be like watching the Arsenal and not having to put up with any halfwit cunts that play for England and plus it would keep our players away from thugs on the European circuit. And possibly bring happiness to Montserratians? 😀 This is what the interlull does to… Read more »

Oh, and our players generally come back in bits. Hate the interlulls.

Sometimes Arsene just says the simplest of things in all the right ways. Cue for the fantastic British press and their dirty nosed counterparts all over the globe to trot out headlines of ‘Wenger wants to call of the Euros’ and/or ‘Wenger hits out at Wales’.

I wish they only played these international games during the summer break and even then limit it to 1 or 2 games a month. But wait, FIFA’s in charge, no chance of anything sensible being decided on then.

Hahahh I was just fucking around. Geez, you guys need to lighten up. 7 thumbs down for that? Hahahah

I believe Euro 2016 is expanding to 24 teams. Perhaps 1/3 of those teams could directly qualfy, I don’t know. There isn’t going to be a fair system to determine who and whouldn’t automatically qualify, let’s face it. I enjoy the World Cup and European Cup just as much as the next guy, but domestic football is where it’s at.

So yes, this will be a rather boring interlull!

PS I hope Frimpong destroys the cunt in the CC quarters.

*to determine who and who wouldn’t*

England players of old seemed like fun people to be around cheeky chaps that loved a party blokes you’d like to share a pint with, the current crop (Theo and Jack aside) are a bunch of fucking cunts “led” by a guy who shagged his mates bird has allegedly racially abused his mates brother has a coke dealing father and shop lifting mother!! Not at all the sort of person you’d want to share anything with, unless you had a wasting disease I’d share that with him, anyway that’s the real reason no one cares they are all cunts!!

No public funding for Tottenham Hotspurs’ planned redevelopment. Sign up to save public money: http://epetitions.direct.gov.uk/petitions/14605

Did we get any govt cash?

favorite picture of all time!

Saving money and the Planet…..

How times changes. You know, you can know the form of the arsenal by the way the fans receive the interlull-even Arsene.
A couple of weeks back, we all wanted it because arsenal was in such bad form we needed a breather-even Arsene.
Now, the team is in such fine form no one wants it-even Arsene.
This is to more hating of interlulls!

or just let arsenal play in international games. there might be small technical problems, but hey those guys are paid enough to solve such things.

Get to work you lazy asses!

How does interlull suck an arsene?

Quarter season review: We are better, but we have not turn the corner yet. | Being Arsenal FC Bystander

[…] often seems to be a spanking ground for the lesser quality opponents, and is something of a farce. Arsene agrees, and fears that the interest in international fixtures is waning. He is right there, give me back […]

For once, Wenger is dead right. Fucking up the league season with these international breaks is no longer tolerable. Most English fan don’t give a toss about the perennially useless national side, anyway: just like rat-face Gary Neville we only really love our clubs.

The solution to this problem is staring us all in the face: a summer qualifying tournament. Qualifying groups of four teams, playing home and away over four weeks every other July, would sort everything out. September to May would then be left for the real stuff – league football.

I don’t really mind international football i just don’t watch England and watch other teams. I think it’s ridiculous though for him to say that the bigger countries should have the opportunity to be qualified directly though. The biggest thing i think Uefa should get away with is the whole seeding process that is used for all there competitions. I personally think any club or country should be able to be drawn against anyone to play.

I could not think of anything to do am frustrated for not seeing the Arsenal men in jersy for more than three days playing a match, the interlull is a nightmare, bring on the real game please!!!