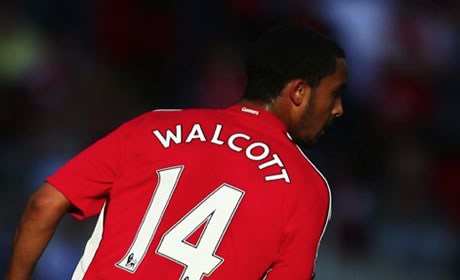 Arsene Wenger has paid homage to Theo Walcott’s efficiency and stressed that despite having been at Arsenal since 2006, the player is still ahead of schedule in his on-field development.

Yet to be struck down by the niggly injuries which have so affected his consistency in the past, the 22-year-old winger has made a marked contribution in attack this term laying on goal after goal for captain Robin van Persie.

Reflecting on the player’s improvement ahead of last night’s game with Borussia Dortmund, Wenger told the official matchday programme:

“You can see he is becoming more efficient – in his final ball, in his dribbling, in his passing, in his decision-making. He’s scoring goals too. People might be surprised, but he’s still only 22-years-old.

“The expectation level is so high for him. He is already at the level where people really start their careers, and he already has international experience. He’s developing very well.”

The boss isn’t the only one impressed with the Southampton Academy graduate’s recent progress. Having repeatedly been the beneficiary of Walcott’s pace and precise crossing over the course of the last twelve months Robin van Persie also had warm words of encouragement.

“I believe our understanding has really kicked-off in this calendar year – we had a good connection before that too but were both a bit unlucky with injuries.

“Now, we’re both fit and at a level we want. I’ve always liked Theo and rated him very highly, but I feel he’s stepping up his game another level at the moment. Now he is delivering that final cross consistently – although it’s important to remember that a cross is not solely about the guy delivering the ball or the person on the end of it.

“It’s about the movement of the striker and the quality of the cross – both players are equally responsible for the success of the move, and I think it’s a vital thing to stress because people sometimes criticise crosses without looking at the striker’s involvement.

“At the moment, it’s working well from both sides and hopefully that connection will continue.”

The only shadow hanging over both Walcott and Van Persie is the knowledge that both have yet to sign new deals at the club. Hopefully both will recognise the hard work put in by Arsenal in turning them into the players they are today when it comes to negotiating their futures.

Most improved player over the last couple of months for me. Cor this humble pie is tasty…

Theo has been great so far this season. FINALLY. He’s getting there and I’m very happy. I think he might be waiting for Robin’s decision to sign. I hope the both stay.

“It’s about the movement of the striker and the quality of the cross – both players are equally responsible for the success of the move, and I think it’s a vital thing to stress because people sometimes criticise crosses without looking at the striker’s involvement.”

Wise words from Captain Vantastic. Its a part of our game that has been a little deficient in the last few years. ~Very glad to see the two are clicking so well and both of them are so appreciative of each other, it can only be good for us.

Puts Jenkinson’s crossing contribution in context, too. He puts in tasty crosses, but he and the striker (or midfielder furthest forward) still need to get on the same page.

Over the last few games Theo has been really consistent with his final ball and getting in behind defenders which is what he does best. Love seeing him put in an extra shift in defence as well and may this partnership continue to blossom

He’s been playing well this season, but I think he stepped up a gear against Chelsea and hasn’t looked back

proof that Gotze has signed for us XD

the only sam is nelson
Reply to  BorisCro

incredible, arsene signalled his delight at the signing the moment the ref blew for full time against udinese, three whole months ago…

the prescience of the man is truly awesome

But he is like their Wilshere . a 19 year old talented midfielder who has been with his favorite club since he was a kid . I kinda feel sad for them , their fans fans and coach.They are like Arsenal last season they sold their best player Sahin , next summer Gotze.

If these guys can be fit, I see titles at the emirates. It takes 2 players with great understanding to raise a team. The last time we had that was Henry and Pires and those were our title winning days. Cesc an Nasri were great for us but no 2 strikers really connect in thier days, so, no title. God, pls keep Theo & RVP fit and rain titles on Arsenal!

Arsenal through yet again, Watt is out on loan and a whole load of gossip. « savagegooner

[…] other news, Arsene Wenger and Robin Van Persie have been once again singing the praises of Theo Walcott, while we’re also rumoured to be looking at a[nother] youngster. Everyone’s favourite […]

Positive – we have the best attacking partnership in the Premier League.

Negative – if one goes it’s likely both will go, and to the same place.

I hope the one thing we have in our favour with these two players is that they respect the club. I really do not see the board going above wenger on this and selling Van persie in the summer, and i really really do not see Van persie running down his contract and leaving the club for nothing. especially after all the injuries. You could of picked Nasri running down his contract and leaving for nothing, but Van Persie- i just do not see it happening, and i do not see Wenger selling. There’s only so many arsenal players manchester… Read more »

This is great, and it’s really great that both players have gone out of their way to highlight it as well. By all accounts Van Persie is taking really well to the captaincy and thriving on the extra responsibility. We can see that on the pitch thanks to all the goals but he apparently spends far more time on his programme notes than most club captains and really works on saying the right thing. Not saying he writes every word, but I imagine many captains would glance at them and sign them off each week, and he puts in much… Read more »