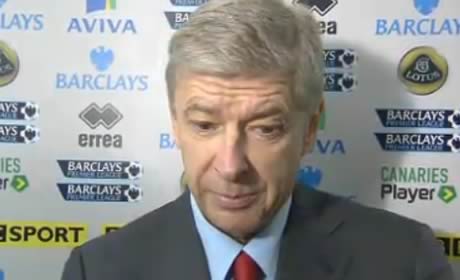 Arsene Wenger says he remains fully committed to Arsenal despite earlier reports suggesting he was considering his future at the club.

Speaking after Arsenal’s 2-1 win over Norwich, Wenger said, “I am completely committed to this club. It is the club of my life. It was a conversation where I said that if you don’t do well enough, that is the only way I would consider it [leaving] – if I am below what is expected of the club.”

In an interview with L’Equipe this morning Wenger spoke about leaving good foundations for his successor and when asked if he’d be in charge next season he said, “We’ll look at things at the end of this one.”

Perhaps something was lost in translation, and the comments certainly seemed out of character for a man who has always respected his contracts, but in the context he’s just given them they do make a bit more sense.

I suspect, however, this is a topic that will need further clarification. However, while Arsenal keep winning games it remains less of an issue than it might otherwise be.

Meanwhile, the boss has hailed captain and goalscoring hero Robin van Persie after his two goals against Norwich. Speaking to the BBC he said, “I must say he’s absolutely exceptional, world class, but because we have a very attacking style we create many chances. He’s a fanastic finisher, but also Walcott and Gervinho created many chances. He’s at the end of it but as well you would like to give some credit to the two wingers today.”

OptaJoe says: Robin Van Persie is the 5th player in PL history to score 30+ goals in a calendar year (Shearer x2, Henry, Ferdinand, Van Nistelrooy). He has scored or assisted 38 of Arsenal’s 58 Premier League goals in 2011.

Wenger confirms he is staying?
Well, I guess this is like a new signing no?

Oh Fatgooner will be chuffed.

Sigh of relief*
Wenger IN! And committed to leaving the club in a good position and lined up with a suitable successor!

Can I finally uncross my fingers now?

RVP has shown he’s a world class finisher and one hell of a captain.

Would have won for more goals, if we weren’t so gervous in front of goal.

So, I guess what he meant is that the Arsenal are not in the top four currently, but let’s wait until the end of the season. I don’t think he expects to finish in 7th (now 6th).

I think he’s a proud man who feels he’s had a lot of unfair criticism (mainly in the Media). Also 2 young players who were almost like sons to him, and who he (perhaps naively) believed shared his vision of a successful Arsenal Team walked away from the club at the end of last season. Not surprising he appears a bit disillusioned. I bet the cold chill I felt when I read the L’Equipe article was shared by many of you. Honestly, who could replace him? To those fans who have been so negative towards Arsene over the last few… Read more »

so the media messed with Arsene’s uterus in translation?

Maybe wishful thinking but I hope a part of the grand scheme is to get ex players involved within the club on both coaching and ambassadorial capacity… like b’arse’lona…
Would love to see our own ‘Pep’ come through the ranks eventually…
Perhaps its time to stop fannying about, raid Ajax & get Bergkamp involved with the youth setup…

Has some moron gone through every comment on this post and thumbed down each one? If so what a pathetic low-life.

Yeah theres a couple spuds come on here of occasion and do it, I have seen it a quite a few posts – called one out on it one night, but all he could seem to say was ‘mug’, I suppose usually its not called for to mock the afflicted , but when one is a spud and has a brain the size of a sesame seed, I think we get special dispensation 🙂
Bunch of dicks, but what can you do.

RVP is a god amongst men

The Don
Reply to  Frog

that was a joke right….