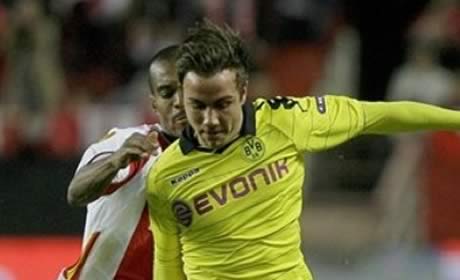 It doesn’t take much Googling to find a story linking Borussia Dortmund’s Mario Götze with a move to Arsenal. Fees of up to £30m have been mentioned on top of whispers that Arsenal pushed very hard to get him during the summer.

So, with the January transfer window looming, and Arsenal set to play the German side tomorrow, it’s no wonder that Arsene Wenger was asked whether or not the Gunners would make a move for the player.

Interestingly, he was asked the same question twice. Once by the UK media, and then later by a German journalist. The two answers are quite different.

To the UK press he said: “At the moment with the transfer window … we are interested just in keeping our squad, we have a massive squad and we are not after anybody.”

To the German journalist he was a little more forthcoming, replying in German: “He’s a very good player, I’m not surprised there is lots of interest, but from our side I don’t think this is the best moment to talk about it. We play Dortmund tomorrow therefore it’s important for us to focus on the game and not talk about transfers.

“But you can never say never.”

Arsenal have reportedly been scouting the player quite vigorously in recent weeks although that probably has as much to do with watching Dortmund ahead of this Champions League fixture than anything else.

But Arsenal fans would certainly get excited at the thoughts of adding a player to the squad who can, quite literally, tear defences apart and leave them red raw.

I’d expect him to get a heft suspension for that

that sentence was literally stolen from Jamie Redknapp

On fifa manager 12 I buy them both and they are my best players alongside RVP and Wilshere, so we should by them both 🙂

Apologies for down voting, I didn’t notice the obvious irony.

10/10 for the .cx references, good old bob. one of the original omfgwtf internet memes

can you confirm that wenger responded in german to his teutonic questioner, thus baffling the english contingent?

Yes, he replied in German

i like to think that perhaps he riffed a little in japanese with some far eastern tv station before solving the sovereign debt crisis for angela merkel, finally returning to some poor, drooling hack from sky and presumably having to dumb everything down nicely for him “NO WE WILL NOT BE SACRIFICING AN X FACTOR CONTESTANT AT HALF TIME TO PLACATE THE INJURY GODS” that sorta thing.

What a cool man.

pretty sure he’d be ANS

If I have to explain the parody its pointless.

I heard he can expose gaping holes in any backline.

the only sam is nelson
Reply to  BillyBatts

absolutely. our rearguard will get pulled wide apart if we’re not careful

We need to stay tight at the back so they can’t penetrate us, that’s for sure.

We don’t want to let them in behind.

Anon
Reply to  the only sam is nelson

Not to mention double penetration.

Jim Deen
Reply to  the only sam is nelson

But if we tighten up too much behind, the wingers might give it to us from both sides.

cromulus
Reply to  the only sam is nelson

If that happens to us on Wednesday, it will be an absolute bummer.

Mike Hawke
Reply to  the only sam is nelson

I need a cold shower with my teddy bear after those posts….

Krakfish
Reply to  the only sam is nelson

Could end up right in the shit…

Eric Irish gunner
Reply to  the only sam is nelson

Götze would be a nice little belated Christmas present for the club. I would like nothing more than to see him play for us but I doubt we can lure him, especially with the likes of Bayern and Real Madrid tailing him too. Nonetheless, still keeping my fingers crossed.

Anyone remember summer target Ricky Alvarez? That boy has been fantastic of late for Inter. Setup both goals in their last Serie A game and made one time gunner’s target (if you believe the speculation), Zarate look quite average.

That said, if we don’t get Goetze then I would still sign Zarate. His temperment has caused him problems at Lazio but he’s still young and can still make it at the highest level. He’s better than Arshavin anyway

If we get him and decent back up to van persie, I will be over the moon. Gotze plus a capable striker. I’m sorry, but as much as I would love to see Podolski he is too expensive. My favorite realistic options would be: Cisse, Shane Long, Doumbia

I think it could be a bit of a bum deal.

Umm.. Would he not be cup tied for the champions league?

Not if Dortumd are knocked out right?

Even if they get knocked out.

“he can, quite literally, tear defences apart and leave them red raw.”

As long as the defence is Chelsea’s and the red raw is John Terry’s scraped-on-the-floor arse, I’ll be more than happy to see him join us.

I luv how his name sound.. Super Mario an avant grade to my Ramsey

I hope he won’t be nicknamed Super Mario.

Arsene Wenger demonstrating his immense capacity in the arts by displaying a commanding prowess of the German language impresses and infatuates me fully.

On a side note, the German language is very close to its Japanese counterpart in terms of grammar — so maybe Nagoya’s got something to do with that, or he picked it up by himself?

I’m beginning to wonder how many languages he can speak.

Let the great man tell you himself.
http://www.ukgermanconnection.org/?location_id=705

Off topic. Alan
Mullery on radio 5 says that spurs are now a bigger club than arsenal. 50+ yrs no title 1 yrs champions league. Who let the prick out the home anyway. Jack responds on twitter by giving 3 grand to charity if they finish above us come may lol don’t ya just love jack

completely off topic, but just wondering: Does anyone here have an Arsenal Credit Card? If so, what shops can you spend the rewards points at?
I can’t find the information about that anywhere.

you redeem the points for stuff online, they have selected stuff that you can pick from

Merlin try the spurs shop on the high road, doubt they will take it but worth videoing the response on your phone.

If they did actually sell anything to me I could then take the item back complaining that it had a cock on it.
though, the whole thing would mean actually going into a Sp*rs shop… twice…
*shudders*

Ha thats excellent. Remember the hullabaloo years back when we didn’t field a single Englishman for the first time, now I wonder if the quiz question will come around when did we not have a Frenchman in the starting line up lol. Ironically against a French team. I wonder actually when was the last time we didn’t have, if someone puts my life on pause tomorrow, I might check.

actually it was Park (South Korea)

Park is from South Korea mate!
But I get ur point.

Haven’t seen enough of him to comment properly so someone guide me..
Where would he fit in our current line up?
The way we’ve been going I wouldn’t know who to replace out of Ramsey, arteta and song for wilshere’s return let alone adding another one to the mix.
If hes to play wider how do you drop walcott or gervinho at the minute either? Id be fkn rapt if he did sign cos I hear good things but dunno where he goes lol
Any thoughts?

Straight to the point and 100% true

We will be linked to him all the way until January and he’ll just get signed by some other club right under our noses like Mata did!

i am not sure that we really need goetze to be honest. not with jacky boy being the future. the only people we will need to replace besides getting another striker is either if rosicky or arshavin leave. but i think chamberlain would do a decent job either out wide or in the hole.

Well you got to remember mate, that Goetze is 19, at the start of his career and one of the hottest prospects in football – I’m afraid much as I like Arshavin and Rosicky, neither of them ticks any of those boxs anymore.
Its never a bad thing to improve your squad at anytime, and he would if we we’re fortunate enough to get him (don’t hold your breath) definately be a sterling addition to the qualities we already posess in midfield.
Simply put, he would be one for the future as much as the present.

Cannot see us signing Goetze in January… He is UCL cup tied and we have Diaby & Wilshere to come back-2xLANS!
If we sign anyone in Jan, me thinks it will be Gourcuff…
Off topic… Napoli were the first team that have attacked the Man Shitty backline & as good as they are in attack & midfield, they are not as strong in defence as the media would have us believe. I reckon we can have ’em at their yard… assuming everyone (VanPersie) is fit.

its expected anyways. to be honest if we are going to sign any midfielders i think gourcuff is a more realistic target since he isn’t attracting big clubs at the moment.

if bremen and gotze are in their yellow kit tonight, the away end will look like

(not everyone will see what I did there)

Well if its a Lemon party that I think you mean then it’s probably for the best that not everyone does lol.
I did note you’ve got Bremen instead of Dortmund, now unless your being really extra clever and refering to the bar the Lemon Loungue, in Bremen – which would kind of fit with the Lemon party I’m thinking of … then I am completely stumped. Though I’m sure Werder will be delighted that they’ve suddenly qualified for the group stages 5 games in 😉

no it’s just stupidity on my part, if only i were that fucking clever

and yes it is the lemon party you were thinking of

Padwoir
Reply to  the only sam is nelson

Lol right, but going back to the original point, yeah it will 🙂

hi, i don’t know if someone has said this already, but i just watched the german part of the interview with Wenger and it seems it has been misconstrued here: as I heard it, it was actually the interviewer who said ‘never say never’ at the end, and all Wenger replied was ‘football is football’. So personally i don’t think he was any more forthcoming in german than he was in english. hilarious comments on this article in general by the way.

[…] Again in another example (thanks again to Arseblog), Wenger even gave two vastly differing responses in different languages to questions surrounding Mario Götze; One straight bat response in English and another more open response in German to a TV reporter – both in the same interview. […]