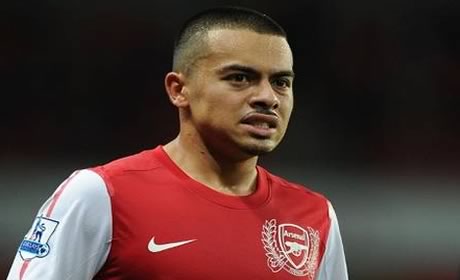 Arsenal have announced that youngster Nico Yennaris has signed a contract extension with the club. Despite being primarily a midfielder, he made his first team debut at right back in the Carling Cup against Bolton last month.

Speaking on his Twitter account he revealed he’d signed for ‘another year’ at the club and will be hoping to do enough to extend that again in the future.

Meanwhile, another of the reserve team’s highly regarded midfielders, Chuks Aneke, has joined League One outfit Stevenage FC on loan until January 2012. He joins his teammate Luke Freeman who also joined Stevenage on loan last week and Boro boss Graham Westley will be hoping the two Arsenal men can recreate some of the understand they’ll have from reserve games.

Arsenal’s reserves are in action this evening against Wolves. A very young team lines up with Sebastian Squillaci and Vito Mannone as the experienced heads in the side.

Very interested to see what chuks can do on loan, the kid has great potential and seems to be a very technical player with lots of power. To see him song and Frimpong in our team in a few years would scare any midfield!

Just hoping that Graham Westleys influence doesn’t rub off to much on the two lads at Stevenage. No doubting he is a competent young manager, his record stands up to any in the lower divisions..but by god that man has some bizarre ideas.

Don’t know anything about him. Can you expand?

Without trying to sound to sensationalist about it, they play a very destructive brand of football. He has been roundly criticised, certainly last season, for allegedly getting his players to feign injury or specifcally foul opponents, so that he can relay tactical information, whilst the play is stopped. That may be sour grapes on the part of other teams, but the accusation has some grounding as he was spoken to by the Football league to be mindful of certain aspects of the spirit of the game, when he sends his teams out. He has done a Phil Brown before,where he… Read more »

It certainly does, thanks. He sounds like a bit of a cunt, in fairness

Wow wow wow, let’s not be talking bad about arsenes succesor. Phil brown with certainly lead us back to the promise land!!!!!

I don’t think you can even joke about that sort of thing…. considering he’s a tango sponsored moron

Well, just read Padwoirs nice comment, thanks for the info and for sharing it

Maybe the young ones will learn a little bit on how to deal with cunts like Barton and Shawcross.

I guess to really understand a cunt you have to live among them for a little while. Imagine, playing with Barton for a few months, you will be immune to all the cuntish behaviour, and we would avoid situations like Gervinho poking a bit at barton and then get send off. HAHA!