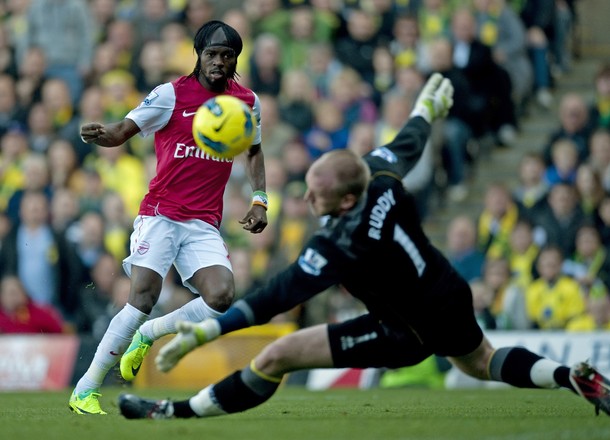 The Ivorian international won the Ligue 1 title alongside Hazard last season and while several of Europe’s top clubs have been linked with the tricky 20-year-old, Gervinho has hinted that the boss should move quickly.

Speaking in an interview with The Guardian, the foreheaded one stated:

“I would advise Mr Wenger to get Eden to pack his cases and come here. His game would really suit Arsenal’s.”

While there is little doubt that many fans share Gervinho’s sentiments it remains to be seen whether the Gunners can be bothered going head-to-head with the likes of Real Madrid in a possible auction. Given Arsene pissed off the Lille big-wigs by stealing Ju Young Park from under their noses in the summer, it seems we may have our work cut out.

Mindless transfer speculation aside, Gervinho also had positive things to say about his time in London and his desire to end the trophy drought in N5.

“We’re going to try and win everything,” he says.

“All of England expects Arsenal to win something and so do the fans. The league, the Champions League, the FA Cup … we can win it all. Everything is possible.

“The most important thing is to win a trophy or two by the end of the season and that’s what I want. I really got the taste for winning titles at Lille.”

“We’re going to try and win everything,” he says.

GOod Luck To ya!

good Luck to ya! LMFAO

Anyone else pictured Gervinho dressed up as a salesman knocking on the front door at Arsene’s ?

As a team player, Gotze is a lot better, Hazard attitude is a problem.

Hmmm. I wish our players would keep a bit quiet on their preferred transfer targets. If we were Lille fans we would be calling him a right Gerard Pique…

But then Gervinho wasn’t born in London.

I don’t care about hazard, for me he may as well be any other midfielder in the world until he’s an Arsenal kit. I love Gervinho though, his determination is something that really shines through in games and although he hasn’t found his scoring boots games are different without him!

Hazard comes across as a spoilt little baby waiting for the biggest pay-packet to come along. I guess he should be left well alone.

I think Man Citeh would be more his kinda club.

Why do you need Hazard when yo have Theo and The OX?

Because Arsene Wenger says one day Theo will play as more of a central striker. Because Alex is not even 20 yet, but let’s say he’s available. Because Gervinho is off to the ACN every 2 years. Because Arshavin’s contract expires next summer Because there is no other player who can play wide except for those guys. So in the wing we only have Gervinho, Alex Oxlade-Chamberlain and possibly Theo Walcott (assuming Wenger still places him on the wings). Wenger made a point in not hurrying youngsters and hyping them up by not using Alex regularly, while Theo has had… Read more »

On a general note, the ACN is becoming a summer tournament starting in 2013, I think.

um we have miyaichi also you know

Sorry to be nitpicking here, but isn’t Hazard the one who is 20 yrs old? I believe Gervinho is 24.

I thought Gervinho was 26, but I’m probably wrong.

But yes, Gervinho is definitely not 20. The first time I read that sentence I thought there was a mix-up between “20yo Hazard being wanted by Gervino” and “Gervinho wanted 20yo Hazard”.

Maybe they would like to do a swap: Park for Hazard. 😉

Then we can do Squillaci for Goetze 😉

Squillaci looked solid as a rock against Man City for the most part. Based on this logic he is now better than Gotze

then swap bendtner for benzemma also..

They did seem to really want Park. That might be why we signed him after all! Leverage in negotiations!

Chamakh for Hazard, seeing as Park has had so few opportunities.

No deal. You’ll have to carry on spewing shit from both ends.

could we have another story about coquelin, please? yesterday’s comments were good fun.

Samir, what’s this talk about you liking cock? Unless it’s a rubber one, as I’m pretty sure you’re a chinless, classless lesbian…

Hahaha argonaut, maybe we bought Park just so we could use him in negotiations for Hazard …

Hazard himself says he wants to go to Madrid – but I just can’t see it with all the attacking talent they have already. We might put in a cheeky 15m-20m bid but I wouldn’t count on Wenger valuation going beyond that. Plus there was the whole “nick a Korean striker from under your nose” thing with Lille. I’m tipping him to end up at Chelsea. They have the cash and are looking to rebuild their squad. Would love to see Goetze in an Arsenal shirt. Dortmund would be mad to sell before the Euros but stranger things have happened.

i would be really happy to see podolski or gotze in an arsenal shirt!!!!gotze more than podolski!!!!gotze is unique,looks good in arsenal shirt and will play with jack wilshere…wherelse in the world do u get to see two midfield wonderkids playing together with song as their papa!!!!!as for as podolski is concerned i rate his left foot second best to RVP’s…very rarely you get to see the kind of things these guys can do!!!trust the boss to really beef up the squad in jan and keep the morale in summer by keeping the squad intact!

What we need is Wilshere to get healthy, Arshavin to go back to Russia and Theo to start scoring more. Blogger wants another striker but the boss doesn’t rotate his strikers anyway. Are we going to get a class striker and sit him on the bench? From YouTube clips and the Carling Cup matches, I think Park is creative and a hard worker. He just needs minutes. Chamakh, Bendtner, Arshavin, Denilson and Vela should be sold to help finance a “big time creative mid like Goetze.

I would also like Wenger to mix up his lineups. Play two up front every once in awhile.

i think Hazard and Goetze are good additions and would add more depth to our midfield. Then AW can release Chamakh, Arshavin and Bendtner, in order of urgency. Theo could flourish as a striker in a twin strike force. Let’s face it, Man Citeh will most likely give RvP an open cheque to lure him to the Etihad, and if $ee$ the cash, we might have Na$ri situation on his contract, so the sooner Theo is introduced to the central role, the better. Furthermore, there’s always that fear that RvP is just a knock away.I might sound like a sadist,… Read more »

its good for our health to speculate on best forwards we need to sign.who is better between Gotze and Hazard but the whole thing comes to a stand still when Wenger/Kroenke comes to the picture.i will be shocked to hell if we get anything closer to a purchase of a top class player on any transfers(Jan and any other time provided this board runs)if not for the underage kids

For all the criticism about his composure in front of goal, one forgets that he’s just a 20 year old boy. In his first season in the toughest league in the world. And how well he’s done so far! Bog things to come from this boy, and Theo is finally a consistent threat on the right. That’s a powerful front three we have.

mmmmmmmmm…..well well this is not getting anywhere bcoz it won’t, le boss alway does is business in is own special and magical ways