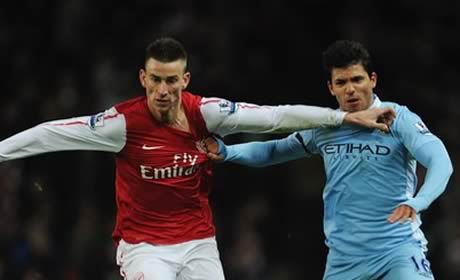 The signing of Laurent Koscielny for nearly £10m raised some eyebrows 18 months ago. A player who had just played one season of top flight football was brought into a team which needed serious defensive improvement.

There were moments during his first campaign which caused some to doubt Arsene Wenger’s decision, but this season has gone a long way to put those to bed once and for all. The Arsenal manager is sometimes accused of not knowing how to coach a defence but the proof of Koscielny’s improvement is on the pitch week in, week out.

“In England all the strikers are six foot three or four and 90 kilos. I had to progress physically as I was not used to that kind of opposition in France. I had to work hard to bridge the gap in terms of physical aspect. This season I feel much better in the duels and you can see it because I make fewer fouls and get fewer bookings than last year.

“I am also a better player now because I know th club, I know my team-mates very well and I feel good in my life off the pitch”.

Having recently won his first cap for France, and with Euro 2012 looming, the Frenchman knows that he’s got a good chance of making his national squad as long as he continues to perform for Arsenal.

“Arsenal is my priority but the Euros are also a big objective for me. There will be one game in Germany in February before the coach announces his squad in May. So I will need to show my level with Arsenal in the next 6 months”.

If he continues to play the way he has been for the Gunners there’s little doubt Koscielny will be going to Poland and Ukraine next summer, and the money Arsene dished out to secure his services looks better spent each week.

SOLID! Bout fn time we’re not complaining for another CB.

No, now people are complaining they want a new set of FB’s…. Wenger can’t win it seems.

I think most people would cry for a center forward, not full-backs. People who seriously claim we need 2 more full-backs forget that we have a 29-year-old Andre Santos and a Bacary Sagna who’s around 26. They really can’t have someone else in front of them in the pecking order, and it’d be pretty stupid for the coffers to spend on a full-back just to sell another quite established full-back for a lower price.

From what i’ve heard, Arsene has also changed the way the team trains. They used to train defending as a team but have now split it up into each playing section so that players know what to do when it enters their section/quadrant.
It seems to have made a massive difference and shows that Pat Rice really does know how to defend (i personally had no doubt but there were other supporters that questioned his role).

he had messi in his pocket at the grove back in feb. not many defenders would be able to look back on 90 minutes against messi with anything like that level of satisfaction with a job well done

and he took a yellow for the team on sunday that was well judged, too – old school style

kos gets a big thumbs up

Hope we see a similar level of improvement from Gervinho over the next year… I’m hoping he can rid himself of the ‘Eboue’s’ everytime he gets near the opposition goal… Fingers crossed he improves coz atm he reminds me of a Kiwomya/Helder hybrid.

I’ve always rated Koscielny. You must say he’s transitioned pretty quickly to the English game, yes there were ups and downs, but there have been far more ups for me.

With a fully fit team we definitely have one of the very best young defences in world football.

If only we had some fit full backs!

Ya but I heard we were going to sign Gary Cahill. What gives?

I heard we were going to sign Wilf Copping…

He’s shit? I would say that was enough reason.

I reckon if we offered 3 mil, Gartside would take it right now…. How Bolton value him at more than 18 mil is beyond me

He is fast, he is a tackles cleanly,reads the game well, great composure and he wins headers against crouch . What more can we want?
Oh yes he isnt injury prone either but gets knocked out by his own team mate(squillaci).
Kos kos kos … Coz he’s kos kos kos…

Have we signed Sebastian Frey and Franck Ribery yet?

kos and vermaelen has been two of our best this season, no doubt about that.

I think we have seen massive improvement from a lot of players this season compared to last, Song, Kos, Walcott, Ramsey and RVP. Cant wait to see Jack back in the game as well.

i still remember that unfortunate moment during the carling cup final game. Koscielny looked absolutely devastated when his horrible error cost us our chance of a first trophy. What made it worse was the pat on the back of his head by some idiot. He looked totally shattered i thought it was all over for him.

But he never gave up, he worked hard, and like he said he had to get used to the english game, and since then he has done remarkably well to prove some fans wrong, including me. i was one of those who thought he couldn’t make it, but he did.

Thumbs up for you Mr Laurent

wed be top , if only wed paid out for mata,, now tbh we need to replace gervinho hes a waste of space as is santos,jenkinson,arshavin chamakh,park

Mata plays on OTHER flank , beside Zhervinyo has been brilliant for us .I remember we beat Mata’s team 5-3 @ their stadium .

He lead the club’s assists table , and with fewer games he has as many goals and assists and goals as Mata.

Santos is not waste of space , YOU ARE A WASTE OF SPACE

Right, so replace half our team? And get in who exactly? Considering the settling in period, working with the team, etc…
Also, Gervinho has done well in his 15 games for Arsenal, while Santos has done well in his 12. Jenkinson has stepped up well considering he came straight from league 1 and had to play in the team bereft of confidence.

You sir are an idiot and I’m very glad we don’t have someone with your lack of knowledge in charge. I’d trust a manager with 15 years of actual experience over your, heavily influenced 2+ years of Football Manager experience. Taking Yeovil to the champions league means f-all in reality.

jenkinson looks like hel be a good player in 5 years
santos looks error prone and cant defend
arshavins lost it and to be honest its because hes been played out of position, if he had taken over the bergkamp position hedv been a different player, (no-one asked dennis to defend)
gervinho=no end product ,runs dribbles, doesnt see the pass that a class player would ,loses it, shoots=goal kick
walcott=anonymous in big games
but weve got an excellant spine
in sczney,gibbs(whn fit) sagna v5 kosclny, song wilshere ramsey(maybe) and rvp,
just add a bit of class on the flanks ie robben,ribery ,mata even the ox and a world class back up striker and your winning the league or very close to it

May I recommend you join a English Grammar class so it can seem that what you are saying makes sense.

I don’t think grammar lessons will help make any sense for him/her.

I believe it shoul read ” join AN English language ……..”

gus
Click to flag and open «Comment Reporting» form. You can choose reporting category and send message to website administrator. Admins may or may not choose to remove the comment or block the author. And please don't worry, your report will be anonymous.

Jenkinson is already decent player, the kid gives 110% every game with a hell of a cross.

Watch carefully, rarely does a Santos let a player go pass him with the ball. Sure there’s some dodgy positioning at the start of the season but he has improved and also a weird way of getting the ball and I won’t complain as long as he gets it back.

As good as Arshavin is/was he is no Bergkamp. Modern tactics require everyone to defend so don’t bullshit me with that point.

Gervinho rips teams to pieces and opens up spaces. End product? Assists. Doesn’t score much cuz he has to come from the wing but he shows promise.

Walcott = performed against Chelsea last season and this season. Assist for RvP shows he is becoming more efficient as a player.

So before you go sell the soul of Arsenal to buy all those players get your facts right.

gustard, if you’re just coming on here to be a hater, save it. And stop talking about Mata, they only publicized our interest to drive up his sale price. Robben, Ribery…give me a break! Is it 2006 or 11?

Last year Carling Cup final – Kos and SZCZ look at each other confused and in disbelief. Their miscommunication cost Arsenal a shot at silverware. This year SZCZ is on the verge of superstardom and Kos has been a model of understated solidity.

Yeah, because other fans who don’t remember the GG or BR days say so and so do opposition fans…. So it must be true

kos,TV5,sagna thats one consistent back id say!!LB has 2 good players but sadly they need a run of games in the team.
look at our midfield..ramsey,song and arteta consistently playing together.for me that has been a major factor in the teams improvement this season.
for me in january arsena has got just one decision to make.
do we need an extra creative mid(or wait for wilshere) or do we need another man at the front three who can replace walcott/vanpersie/zhervinyu to add dynamism….we have to make life harder for opponents when it comes to predicting our team selection.as of now they know no matter what the front three will be van persie,walcott and gervinho….we need a trump card at the front.

Ahhh seems like a total different player. I still remember him doing stupid mistakes but he always learn and adapts so quickly that he hardly make the same mistake twice in the same game. Yet he reads the game so well, fast enough to recover, strong enough to be a thorn. I can really go on forever. 🙂

Now to me he is on the brink of becoming a world class defender. With Terry, Ferdinand and Vidic on the verge of passing their prime, Kos is up there with Verminator as the top 5 defenders in the league.

With Kos, Vermaelen, Sagna and Szchezsny with Mertesackers experience and eventual adaptation we have one of the best defensive units.

Koscielnys intelligence and decision makin this season has been nothing short of outstanding. To be honest I never understood the criticism of him last season. I thought he was by far our best defender last season baccy aside.