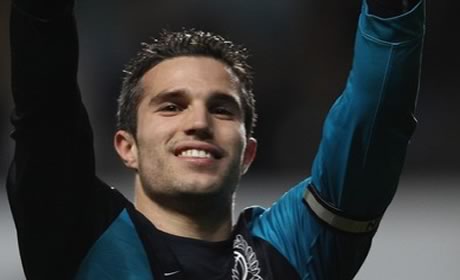 Since his arrival back in 2004 there have been few who doubted the talent of Robin van Persie, but between his early disciplinary issues and his constant battle against injuries, many feared his obvious potential would not be realised.

In 2011 the Dutchman has shown that perseverance and quality will come through in the end and with 34 goals for Arsenal in the calendar year it’s safe to say he’s enjoying himself.

“I just like to play football,” he said. “I think football is a great game which can go many ways. I just love it at the moment.

“For me it is not just scoring. Football is more for me than just scoring the ball in the back of the net. I think football can give you much more than to score. I enjoy a nice pass as much as a goal, you know?”

And while equalling Thierry Henry’s record for Arsenal has made him proud, he’s determined not to dwell on breaking it in case it affects his performances.

“I’m on 34 now like Thierry. It is a big honour, to be fair, because Thierry is probably the best player Arsenal ever had and to achieve that in a year is really special.

“I don’t want to jinx myself. I know about it. It makes me proud, but it is not my main target.”

With two games left in 2011 Robin also has the chance to break elbowy Geordie bloke’s Premier League record but you know that this Robin van Persie will put the team first and if the record comes with that then all the better.

Fact is that if Cesc had not left we would not have RvP as a captain. Cesc probably wasn’t a bad captain – he really did love the club. He just wasn’t the captain we needed for such a young group of players.

I think Wenger has underestimated how much a good leader(s) can benefit the team – and we are seeing exactly that with Robin right now.

He also scores a lot of goals.

Good player that Cesc is, the guy lacks certain leadership qualities that Robin has. Cesc leaving may well yet prove to be a blessing in disguise.

AND he’s MUCH, Much better than ‘Elbowy Geordie Bloke’ too.

We love RVP (who scores when he wants….)!

I really think wengers big decision was giving cesc the arm band and not kolo toure. Whilst also selling kolo instead of gallas. Some players are just ment to retire at clubs.. Thiery and kolo were those type of players. You see what experience can bring to our club with the signings this season.. Imagine if that experience was gained at arsenal.

I am officially classing myself as Dutch now.

He can do it all, this man. Apart from the obvious goals, there’s assists, pressing opposition defenders… and I’ve lost count of the number of times, when defending corner kicks, he’s been the first to get his head to the ball at the near post and help clear our lines. And he’s proving to be quite a leader.

I hope he stays for a lot longer yet.

Hat trick against Wolves would be a great Xmas present.
That would break Alan’s 36 goals and up my points on fantasy football! COYG

MJB
Reply to  GOONER up

Heh! I’ve been keeping an eye on Wolves for a while now and they are, uhm, crap really.

Mick McCarthy is really entertaining but, unfortunately, his team isn’t.

And why wouldn’t you love your footie, Robin? You are quite literally ‘the business’ , the top dog, the real deal by far in all of the Premier League this year! Rock on, baby.

And btw thanks for signing that new 4-yr contract at the Emirates before season’s out. Much love, son : )

He is the man of the moment, a true professional and also a good leader. Putting the club first even when there is a record to be broken. I salute you sir’. COYG!

Robin van GOAL. They see him rolling the ball in the net, they hatin’.

Its all good but will you sign on. You’re invited to Chritmas lunch with my family if it helps make up your mind. You have to travel 600miles but small price to pay to sample my wifes cooking!!

He scores when he wants.

All hail the magic horse placenta

He knows English. He is just too indolent to bother

I’ve grown frustrated of typing the comment : “learn to spell you illiterate cunt”
So I’m just going to leave this one alone. It really is a shame though.

Goonernugget hit the nail on the head.

And you will love it more when King Henry joins in January because he will be like a new sign. Pardon me folks, he actually will be a new signing.

How do you know this, pray tell?

RVP too hot to handle

Cesc was a terrible captain, magical player but crap at being a leader and I think it affected his play. Robin on the other hand revels in the role.

To us he is RVP….to them he is RIP….I am not a POET….but that scorcher against Everton I will never FORGET.

Im in a festive mood so thumbs up anyway and merry christmas to you mate!

Not completely true. But he will be a bigger legend if he does sign. But that’s a given really. We can only hope he’s happy enough with his role to sign again. Even if he doesn’t hopefully he’ll be here all next season. Imagine how much we’d smash it up with one whole season everyone together, no shit start and no excuses. Up the arse we’re so obviously on the up.

Well start up your own blog then if you can’t be bothered to write properly.
Perhaps you could call i ‘R’z-blg’.

PS. if you cannot write a language properly that does make you illiterate. Look it up in the Oxford English dictionary mate.

ANY good info, drills, tips, and advice for being a FULLBACK in FOOTBALL?im 5’7, 150 pnds.

Run up and down a lot.

on a certain day in march RVP will sign an extension. reason:he will remember that the same day last year he scored to beat barkaa and then he will think “oh what a club arsenal is.there is no better place for me to go.perhaps let me sign a 4 yr deal and then i shall go back to play football in dutch league and retire and come back to arsenal when thierry henry is manager” and RVP is assistant manager.around the same time we will have cesc come back and play at arsenal under henry and RVP beacause we all… Read more »