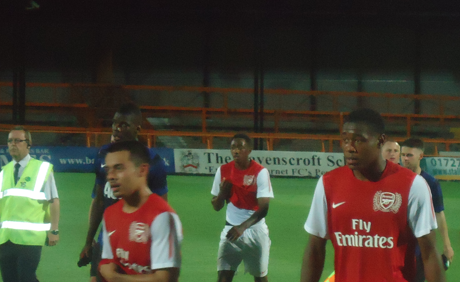 Much has happened in the past week with regards to Arsenal’s youth system, and, on the face of it, the majority of the events that have occurred have been tinged with negativity.

The departure of Alban Bunjaku has been the biggest topic for debate, with the 17 year old currently on trial at West Ham after leaving Arsenal following a disagreement with the coaching staff. Bunjaku, a skilful playmaker, had found the net 15 times for the under-18s in the past two seasons and had shone with his sublime technical ability, but was aggrieved at the lack of opportunities he was afforded at Reserve level.

Only time will tell whether Bunjaku’s departure will come back to haunt Arsenal but, unless he proves to be the exception to the rule, it seems unlikely, with Arsenal not having made too many grave errors concerning players at this level in the past.

Bunjaku was absent as Arsenal went out of the FA Youth Cup to Derby County in extra-time last week. Despite Arsenal dominating the opening period, Derby withstood the pressure before striking the decisive blow late on. There were some positives to take from the occasion from an Arsenal perspective, however, in the performances of goalkeeper Reice Charles-Cook, who made some impressive saves, and right-back Hector Bellerin, signed from Barcelona, who impressed with his forays forward.

That defeat was followed by a much-changed Arsenal under-18 side losing 3-2 to Charlton in the Academy League a few days later. Serge Gnabry and Kyle Ebecilio scored impressive goals for the Gunners and, despite the defeat, Steve Bould’s side are still within touching distance of the top of the league table.

Then came Monday’s Reserve defeat to Chelsea at London Colney, with the visitors running out 4-0 winners. Chelsea’s dominance, however, particularly in the first-half, wasn’t as profound as the scoreline would suggest, with Arsenal enjoying large spells of possession and squandering several opportunities, several of which fell to Rhys Murphy, before a Chelsea side including Romelu Lukaku took their chances in emphatic fashion.

Despite the defeat, it has, on the whole, been a largely positive first half of the season for the second string, and, it is to be remembered, although the club hate to lose at any level, the progression of players into the first-team picture is the primary aim for Neil Banfield and his staff.

In that regard, 2011 has brought several positives, with Ignasi Miquel, Conor Henderson, Oguzhan Ozyakup, Chuks Aneke, Nico Yennaris and Daniel Boateng all making their first-team debuts, whilst Emmanuel Frimpong and Francis Coquelin have established themselves as members of the first-team squad.

The aim for 2012 will be to continue the production line, although some, perhaps not quite in as dramatic fashion as Bunjaku, will fall by the wayside in the process.

He’s likely to be out for the season, but he’s having a scan today.

I really don’t understand this… The amount of times i’ve heard direct praise from the club relating to Alban, all the time spent on him, surely if you see the potential you need to keep him… E.g. the case of Alex Song, many people wanted him to leave about 3 or 4 years ago as most felt he wasn’t good enough, but look at him now. I don’t think young players should by hyped up to much, JET was overhyped and didn’t reach what we all thought he could, young players should be allowed to just get on with their… Read more »

Steve
Reply to  The Iceman

But Song wasn’t disruptive and Wenger showed that he has patience with players to show him his faith was well placed.

Considering van Persie’s attitude problem in the past, Wenger isn’t one to shy away from sorting a player out but obviously felt he and his staff couldn’t work with Alban and they cut their losses now.

With regards to Oxlade; that is the reason Wenger is being careful with him and isn’t allowing another ‘Walcott’ scenario. He’s letting the player develop away from the spotlight.

He wanted assurance of 1st team football and wanted to be the highest paid player for the Reserves. He quit for West Ham for more money, the greedy cunt.

In my eyes he is nothing more than Na$ri.

Got to say, Bunjaku wasn’t shit, he looked class everytime I’ve seen him. But frankly that’s not enough – he wasn’t prepared to be a professional by the sounds of things, despite the fantastic examples he has in the current first team. Whether it be for the drive of money or not, he was impatient. Isn’t the first youth like that, and won’t be the last.

Looking good at under 18’s, where the more physically developed players look great, really isn’t that special. Taking you cahnce in the reserves then leads to the first team but Alban wasn’t willing to wait.
Better to get rid now, than had a disruptive players around.

How is Connor getting on? such a shame seeing a young lad getting injured like that at least he has Aaron as an example

Bunjaku is slow as hell, he takes too many touches and that can render you useless at the top level.

Although he was quite talented, he was one greedy cunt. Him and his family wanted absurd amount of money. This is a player who has never been capped for England so no big loss.

Some gooners are moaning as though this kid was Messi.

Who’s losing sleep about Banjaku?
Never seen him play but without a doubt regardless of whatever talent he might have, leaving Arsenal will be his loss!

Fatgirl you know alex oxlade-chamberlain didnt represent england until he was 17? the same age as bunjaku is now

We have just learnt that after their disgust at the FA charge against Luis Suarez, Liverpool will withdraw Carroll, Downing, Johnson and Gerrard from future England squads. England are now favourites for Euro 2012

Rhys Murphy seems to have been around forever. Like him as a player but you wonder how long he’ll be at Arsenal, particularly with his injury record.

i’m not really following the reserves but is there a chance that we got another promising left back there who could step up to the first team?

Critic what exactly are you criticising?