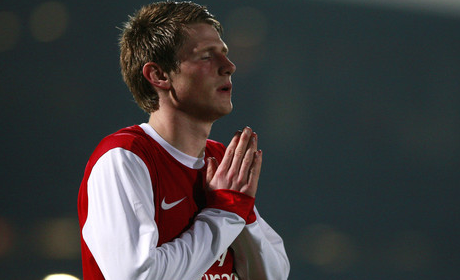 Bar the high-profile signing of Thierry Henry, there has been very little transfer activity with regards to the first-team squad since the opening of the January transfer window, but, at reserve and youth level, the turn of the year marks an important milestone in the development of several young players at the club as they begin to sample the professional game.

Two members of the first-team in Emmanuel Frimpong and Vito Mannone have gone out on loan, to Wolves and Hull respectively, and several of their former Reserve colleagues are likely to join them in gaining vital experience of competitive football over the next few months.

One such player is Sead Hajrovic. The 18 year old Swiss defender, who can operate at right-back or centre-back, has established himself as a regular member of the Reserves side over the past couple of seasons and has today joined League Two side Barnet on an initial one-month’s loan. Hajrovic, who is some way off the first-team picture at Arsenal, will surely benefit greatly from the experience and was one of several young Gunners who were watched by an abundance of scouts during last week’s Reserve League encounter with Aston Villa.

Some loan moves don’t materialise quite as had been anticipated, however, with striker Sanchez Watt having returned to the club this week after failing to establish himself during a stint at Sheffield Wednesday. Watt, who has previously spent time with Southend and Leeds, only mustered a handful of appearances for the Owls and returned to London Colney after question marks were raised over his physicality.

In contrast, Luke Freeman has earned a permanent move to Stevenage following an impressive loan spell with the League One side, and found the net twice for the Borough in his first game since sealing the transfer. Signed from Gillingham amid much publicity four years ago, Freeman impressed for the Reserves with his work ethic, but was ultimately unable to impose himself on the first-team picture.

Chuks Aneke hasn’t quite managed to have the same impact as Freeman at Stevenage, with a decision on the promising midfielder’s time with the League One side to be made once his initial loan expires in four days’ time.

Out in Spain, Wellington saw his abysmal spell with Levante curtailed, with the Brazilian subsequently dropping down a division to join Alcoyano. Wellington made just two substitute appearances in nearly a year at Levante, and will be hopeful of receiving significantly more game time at his new club.

Further players could be set for loans in coming weeks. Ryo may yet make a temporary move elsewhere before the transfer window closes, whilst the likes of James Shea, Gavin Hoyte, Daniel Boateng, Craig Eastmond and Rhys Murphy are all in need of regular game time. Benik Afobe, meanwhile, has attracted interest from a whole host of clubs, including a Premier League side, but is still around a fortnight away from fitness having missed much of the campaign through injury.

Heard we told Murphy he’s free to leave and is having a trial at Hibernian. Good luck if so. Love this article by the way. Always informative.

It’s a shame that we bought Park when Freeman or Afobe could have taken his place on the bench.

Or did we just buy Park to sell a few shirts? If that is a case, we might sell a few more if we actually played him.

it would certainly explain his lack of playing time and i can’t think of any signing wenger has made in all his time at arsenal with a comparative lack of use. it would be sad if wenger is no longer in sole charge of the football side of things and again go some way to perhaps explaining the malaise we seem to be suffering.

right yuo are. that all important portugese t-shirt market. er….

Agree with you that it would be sad if Arsene is no longer the final word on who to buy, but if that in indeed the case why would the someone steal JY Park from Lille, why not someone that was actually ready for the first team.
Also, what does that tell us about Arsene, is he just a bitter old man that won’t utilize a talent just cos he wasn’t the one that brought it to the club? I’m not “crisis-bashing” him but Park was obviously seen as a replacement for Gervinho by Lille. I’m sure he merits a few more chances than he’s been given so far.

sJ
Click to flag and open «Comment Reporting» form. You can choose reporting category and send message to website administrator. Admins may or may not choose to remove the comment or block the author. And please don't worry, your report will be anonymous.

Junichi Inamoto, surely. He was Asian as well!

Afobe maybe, but Freeman is nowhere near good enough to be on the bench of any PL club.

The point I was trying to make was that if you aren’t going to play someone and just have them on the bench, then it might as well be a reserve (or now ex-reserve) who is on minimal wages instead of an international captain that you signed in a somewhat dodgy way.

Forgive me if I don’t care

forgive us if we think you’re a twat, please.

To be fair to Park, he HAS shown some glimpses of quality (goal against Bolton), though few and far between

To be fair to Park, he’s hardly had a chance to prove he has quality.