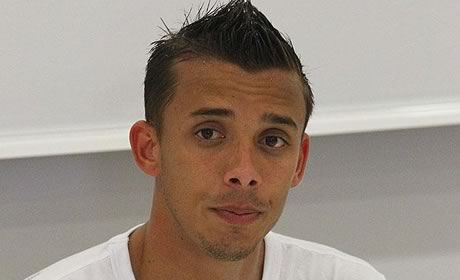 Brazilian youngster Pedro Botelho has been arrested in Spain for a series of traffic offences, report the Spanish press.

The left back, who joined Arsenal in 2008, has spent every season on loan in Spain and is currently playing for Rayo Vallecano.

According to AS, Botelho was arrested on Sunday morning after reversing into an unmarked police car at around 5am. He failed to stop and was then arrested by local police before failing a breathalyster test. To compound matters, it turns out he has no Spanish driving licence. He has been charged with traffic safety offences.

Botelho has played 8 league games for Rayo this season, scoring once, but hasn’t played since their 4-0 defeat against Barcelona at the Nou Camp.

It’s been a bad week for Arsenal’s on-loan, Spanish based Brazilians. La Liga club Levante declared Wellington surplus to their requirements last week and he’ll spend the rest of the season trying to get a game for CD Alcoyano in the Spanish 2nd division.

I have hopes for this one. Lets hope that he can focus on football and breaking into the team more than the typical Brazilian partying.

I would sack him as an example to the other youngsters. Look at what happened when we got rid of Jay Boothroyd a few years back, it set the example to players like Ashley Cole, nic Bendtner and Carlos Vela that poor behaviour will not be tolerated. They all turned out to be model pro’s………oh my mistake.

He’s just a kid being a kid who earns a couple grand a week. Hopefully he’s the sort who will eventually learn and square himself off. Looking at my life I certainly cant put forward any criticism 🙂 as my grandmother would say ‘all we can do is pray for him’

What’s wrong with these little pricks? Fuck sake, what have we done signing all these little shits for long term contracts?

Johnny, don’t waste your time the humour is lost in some people here.

Might as well be hanged for a sheep as a lamb

All he has to do is shag his sister in law and he will be worse than Family Man Giggs, s

Have you seen his Giggsy’s sister-in-law? She’s fit as. And Imogen Thomas…..

Finally. Some news that’s not from wales. Funny how a week’s long in football. First we sign TH14, he does his thing and its a wonderful week. Then yesterday’s events put a halt to all the good stuff and now this kid does his bendtner. 50 pounds says he was high after watching the swansea game in some pub

Very true gooner, a week in football contains many ups and downs, however let’s not forget there is always one constant…..spurs are a bunch of cunts!

Agreed on that last point Corp.

Someone told me our friends down the road became the 1st Premiership team ever to concede 1,000 goals since it started, with Saturday’s one.

No, didn’t cheer me up much either.

I don’t know Mooro, it comforting to know that however disappointing things get, that lot will always find a way of reminding us what a joke they are. I still allow myself a smile everytime I have lasagne.

I am still surprise we keep signing Brazilian youngsters when their record of failure abroad is alarming percentage wise. And we never sign Argentinian, German or Italian youngster when they success rate is the best.

nationality should have no bearing on who we sign ….. thats just a mild form of racism

Here we go, next time i will watch out when I say the English team is crap.

How should I say it to not sound racist?????

are you stupid or trying to take anti-racism into the whole new level??
it’s a stats, got nothing to do with racism!

The experiment of buying South American youngsters and loaning to them to Spanish teams for 4 seasons until they get a passport is really not working. I say if we haven’t got a realistic chance of getting them over here on a special talent visa after a season or so there’s no point, we should not bother wasting time and money on the project. They are away from Arsenal too long and there is obviously no-one guiding them correctly, unlike if they were at in the academy.

Oh dear. The endless stream of AFC-related good news just goes on, as does the teeth gnashing and the angst.

I know what we all need. We need to see Rafael van der Taart getting Frimponged straight in the kisser, then acting like he´d been shot, the great big jessie:

I think Manny did it on purpose. What say you?

the only sam is nelson
Reply to  Jolyon Williams

hahaha superb, missed that over the weekend (unlike frimpong, the legend)

You know when you’ve been FRIMPRONGED!

This guy sucks. We should sell him and buy Joey Barton Cahill samba.