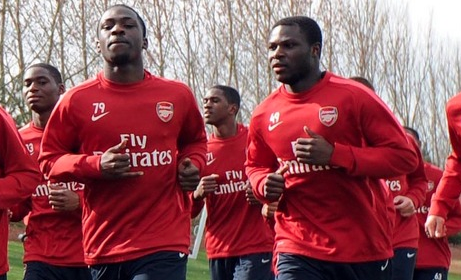 Second-year scholar Jeffrey is one of several young players currently striving for their future at the club.

Having steadily progressed through the club’s Hale End Academy, Monakana, who is a right-winger by trade but also capable of operating as a centre-forward if required, is fully aware that the next few months will be pivotal if he is to earn a professional contract.

A player blessed with impressive speed and technical ability, as well as having a penchant for delivering dangerous crosses, Monakana has struggled to break into Neil Banfield’s Reserve side and, despite having amassed 42 appearances at under-18 level, has only found the net on five occasions.

Given that there are few natural right-wingers in the Arsenal youth set-up, it seems a little surprising that Monakana hasn’t been utilised more often in the second string, with central-midfielders such as the diligent Josh Rees being deployed in his position instead. Monakana was left out the squad entirely for Arsenal’s FA Youth Cup defeat to Derby last month, and faces a fight to be retained at the end of the campaign.

Monakana’s determination and enthusiasm have continued to shine through in adversity, however, and he will be hoping that these qualities will work in his favour when that all-important decision is eventually made.

He should be put in a padded cell with Frimpong for an hour as part of his punishment.

Or even John Terry? Maybe signing Wayne Bridge is a Wenger master plan? Get Bridge’s wife and stick her in the Youth training ground, Terry gets lured by her scent and when he approaches BAM! A cage comes crashing down on Terry and he’s surrounded by the Arsenal youth team who proceed to rip him to shreds!

Wenger’s a genius I tell ya…

Why do you presume the whole youth team acts like animals aye???

We should sell this kid and use the cash to buy Joey Barton.

Yeah! And along with Barton we can bring in John Terry (he’s not all that bad). Then we could sign Shawcross, Evra and bring Silvistere back to stregthen up our defence.
Bring back Nasri and call Teddy Sheringham out of retirement. Sack Wenger so we can replace him with the now available Neil Warnock.
These changes will ensure we finish on top of the league… the Blue Square Premier League.

Always pleased to see your comments Jorge. I miss the ‘youngguns’ blog. Many thanks.

By the way I assume Monakana is the young black kid in the photo!

Joe
Click to flag and open «Comment Reporting» form. You can choose reporting category and send message to website administrator. Admins may or may not choose to remove the comment or block the author. And please don't worry, your report will be anonymous.

Please be quiet, you just put up 4 comments of shit. Also, Beckham is the most capped outfield England player, he’s a legend and despite all the endorsements he’s a nice bloke. He trained with us a few years ago and is a good friend of Thierry’s, that’s why they let him in the groud and you have never been.

Eric Irish gunner
Click to flag and open «Comment Reporting» form. You can choose reporting category and send message to website administrator. Admins may or may not choose to remove the comment or block the author. And please don't worry, your report will be anonymous.

True joe, my mate went over from Dublin with his kid for the game and seen beckham get out of a car at an arsenal stall to buy his kids hats, he asked for a photo and after buying some hats came over to my mate and got a photo taken with him, a genuine top bloke even with all his fame