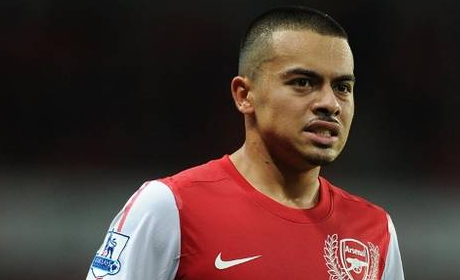 One of the features of this season has been, with the squad depleted due to injuries and a lack of options, youngsters being thrown in at the deep end.

In August, Ignasi Miquel made an unexpected Premier League debut against Liverpool following an injury to Laurent Koscielny, and Nico Yennaris did likewise against Manchester United yesterday.

The difference this time, though, was that there was no injury to Johan Djourou, the player who he replaced, with the Swiss, who is one of several players to have filled in at right-back in the absence of Bacary Sagna and Carl Jenkinson withdrawn following a torturous first-half against the likes of Nani and Patrice Evra.

Yennaris acquitted himself well and also delivered something of an attacking threat with his crosses, but, despite having featured at full-back with some regularity throughout his Arsenal education, the England youth international’s preferred position is the holding midfield role.

His tenaciousness and ability to instigate attacks is perhaps best suited to midfield but, for now, Yennaris is making use of a rather desperate situation and the experience that he has gained this season, having started against Bolton in the Carling Cup and emerged off the bench against Leeds in the FA Cup, is sure to stand him in good stead for the future.

Yennaris is one of several young players in the Arsenal set-up who has reached the point of his career where a loan spell would be of great benefit to him but, such is the current situation at the club, that may have to be put on the backburner until next season.

The 18 year old missed most of the second half of last season after sustaining an injury in the FA Youth Cup defeat to Chelsea and has certainly made up for lost time this time around.

One of the few good things to come out of yesterday! I see a bright future for the lad!

Him, Coquelin and Frimpong are all rough diamonds that can go into making up an extremely strong squad for us in the future! Nico and Francis are going to be especially useful as great utility players.

we have plenty of promising/breakthrough players of the 92/93 generation take wilshere, frimpong, campbell, ox, jenkinson, wellington (his game against Almeria was encouraging), afobe, aneke, yennaris, ozyakup, ryo…
If all of them manage to make it at Arsenal then i can tell you we’ll be really hard to play

oh and i forgot miquel

There’s a photo of Nico as an arsenal mascot when he was little, its on his twitter somewhere!

Stood next to Mr. Arsenal himself!

Wow! Tony Adams’s neck is so long. I think he might actually be Gunnersaurus.

the only sam is nelson
Reply to  Jackorules

fuck, that’s brilliant. thought the days of terraces to team were long gone but that’s heart warming. really, really hope that the lad makes it

he improved us no end yesterday.

if his preferred position is midfield the path to the team is a little cluttered but it’s great to see that he seems able to adapt to the FB role with greater effect than our centre backs.

Tony Adams appears to be wearing a mini-skirt? Can you confirm this?!

Tony Adams has a firm hold of his manly bits. That’s dedication for you. Even during the photo he’s practising being in the wall for free kicks.

Looked solid in defense with a few timely tackles. Puts a good ball in from the right too.

The ship will be righted soon, I have no doubt.

I like the look of Yennaris too, did quite well yesterday. Honestly, I thought his crosses were a bit too lofty/difficult to attack at the end of the game. I wish we had switched someone into his position in the last 5-10 minutes just to give us a different type of cross to attack (forget defense at that point). He had like three or four right in a row, but I just felt they were too airy and didn’t give RVP or Per the ability to attack the ball. But, of who was on the pitch, I couldn’t figure out… Read more »

Looks like a good prospect. No doubt we will send him out on loan, sell him for buttons and never see him in an Arsenal shirt again.

Yeah it’s exactly what has happened to all those other talented players who came to us (or were bred by us) as youngsters and chucked away (Wilshere, Gibbs, Walcott, Szczesny, Frimpong, Coquelin, Song). Fool.

There’s plenty we have sold as well. So fool, yourself.

Indeed, and where have any of them got to? Name one or two of them who have gone on to prove us wrong for selling them… I can’t think of any we’ve willingly let go.

I don’t mind losing crappy players ,but that’s just me

Save 75 cents
Reply to  Mark

Off the top of my head I can think of the following in the Premier League: Seb Larsson, Jerome Thomas and Jay Bothroyd. Not sure if Matthew Upson counts as an ex-trainee despite joining the club at 18. Larsson is one we could use in the current team. Bothroyd would probably be more effective than Park and Chamakh. More recently we let JET and Luke Freeman go. I imagine we will also see Henri Lansbury, Kyle Bartley and Sanchez Watt go as well. I’m not saying Nico is a poor player, quite the opposite. I just don’t think we’ll see… Read more »

Jerome Thomas and Jay Bothroyd are silly examples. Do you really think either would improve our team?? Really? Maybe Seb Larsson at a push but he’s still not the type of player that we’d all be satified with playing for us in the Champions League. Mark is spot on. If you actually look at the records we have kept nurtured and played all of the real talent to come through the team and got rid of the ones who for one reason or another wont fit into the Arsenal way. Whether that be lack of talent, bad attitiude or lack… Read more »

Jeorgebird, to be honest, I was expecting a little more information on the player. I don’t know his nationality nor when he joined us. Of course, you needn’t tell me about his hobbies or favorite dish… You ain’t Oprah, i know. 🙂
But I still ask, who is Nico Yenarris???

He’s risen through the Hale End system from the under-8s and has played for England up to under-19 level.

You are far too kind, sir. Thank you. Now I see why he played with such heart, even if unexpectedly thrown into the deep end so early in his promising career. He’s Arsenal through & through.

His mum is Chinese and his dad is Cypriot but he’s from Walthamstow area I think. My mum knows his mum..

I taught this lad how to swim, he was brilliant. Known the family for years. they are proper Arsenal. Though he would struggle to make it due to his height, but he has a big heart.

Great!! if he starts diving , we know who’s responsible

the only sam is nelson
Reply to  Master Bates

Were you pissed when you write this? “yesterday Nico Yennaris did likewise against Manchester United yesterday.”

And I don’t think tenaciousness is really a word is it? Tenacity surely?

Wenger put him on with the intent to stay back and keep Nani/evra in check. He did well.

Looks solid so far and has an edge over most of the Arsenal youngsters I’ve seen, he’s got no nerves.

god I love seeing tony Adams in an arsenal shirt, goosebumps… fucking legend, what I’d give to have him next to kosc / verm talking to the team, organising, making lazy mugs like arshavin and Walcott actually want the fight, miss u tone

Yennaris did really well. Hope he improves and stay. Tony Adams would have MAKE LAZY PLAYERS SHIT IN THEIR PANTS!

“sure to stand him in good stead for the future” fuck me, he’s our first choice right back at the moment!
I thought he improved us a lot when he came on, and has been pointed out in a comment above he doesn’t have any nerves, he certainly seems like a confident lad.
Must be a high probability he’ll start the next game?

I agree, has to be first choice at least until Bacary or Jenks get back.
I have to say that, watching the match, I observed early on that having youth, pace and knowledge of the position would have been better there than experience as I watched Djourou being turned inside-out.

When Nico came on, I said “That should close the revolving door a bit”….and it did. If anything, I thought he looked more confident to start with than CJ25 did when he first got chucked in the deep end.

This guy should be first choice RB till sagna returns he is a decent player. He did more in the game against man u then all the people playing RB combined so we should give the lad a chance. I still think we should bring in a LB asap i know people say we have got enought LB’s in the squad but we havnt all we have is Santos. I dont get why would should put our Best cb into a LB roll it doesn’t make sense. dont really need to say anything about Gibbs . Also i think we… Read more »