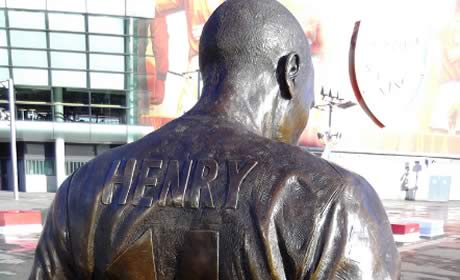 In December Arsenal unveiled three ‘legends’ statues: Herbert Chapman, described by Philippe Auclair in the book So Paddy Got Up, as Arsenal’s greatest ever manager. Tony Adams, the captain who won the league title in three different decades. And Thierry Henry, Arsenal’s record goalscorer.

But where did the statues come from? How were they made and what was the process? Sculptor Margot Roulleau-Gallais explained to Humans Invent how she built the statue in just 8 weeks having never met Henry, making the task at hand even harder.

“I was commissioned by MDM to work under Director Ian Lander. It was incredible that they asked me to be involved in the project. It was really enjoyable sculpting Thierry because to be honest, he is such a beautiful man,” she said.

“The timescale to create the sculpture was just 8 weeks, which was quite short. I had someone to do the metal armature with me and the blocking out of the clay, which had to be the exact pose – essentially the skeleton of the sculpture which involves approximately about 200 kg of clay, around 25 to 30 bags of 12.5 kg .

“That was the first 8 days, and I was pushing to get Thierry to come to London, but his schedule was very busy. I did manage to meet him at Arsenal towards the end of the process, and I had a chat with him and Arsene Wenger about the process, and how long it took.

“This was a very useful exercise to observe him, and understand his mannerisms, because when you work from photos, it can be tricky. For example the hardest person to sculpt was Tony Adams, because he has lots of different facial expressions and not many references. There was lots of pressure on us to get it right.”

Read the rest of this article at Humans Invent

I thought it was like Han Solo. He was just encased in the thing by Darth Vader.
What a let down…

“It was really enjoyable sculpting Thierry because to be honest, he is such a beautiful man,”

They should commission a 200ft statue of RVP peering over the edge of the stadium and make it so you can watch the game from his face.

that is one hell of an idea

Or watch his face from the Game. Fearful sight for opposition fans.

I think the man sized RVP is enough to scare most opposition fans.

“the hardest person to sculpt was Tony Adams, because he has lots of different facial expressions and not many references”.

Sorry Tone, that’s a polite way of her saying you have a face like a robber’s dog.

a bulldog licking piss off a nettle