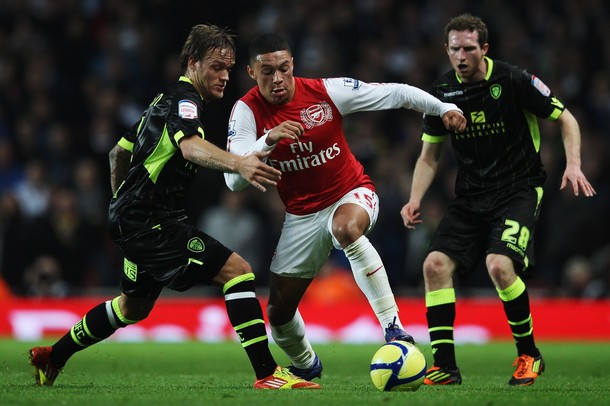 Arsene Wenger promises to make more use of Alex Oxlade-Chamberlain in the second half of the season now that the summer signing has made the necessary improvements in his game.

The Southampton academy graduate has proved himself an exciting, albeit occasionally defensively naïve, addition to the first team squad but has yet to be afforded regular Premier League minutes.

Nevertheless, with Gervinho at the African Cup of Nations, Andrey Arshavin struggling for form and Yossi Benayoun and Tomas Rosicky lacking the explosive burst of pace needed to be fully effective on the wings it looks as though the England under-21 international is a serious candidate for a starting berth.

Speaking to Arsenal Player about Chamberlain’s development, Wenger confirmed he was ready to unleash ‘The Ox’:

“He is very close now and he will be used in the next six months for sure.

“He is working on [his defensive side], his urgency and his committed level as well.

“When you are a young, talented player you have to experience that talent is good, but that commitment at the top level is highly needed too.

“He is an intelligent boy, he understands that, and I am very happy with him. I am confident that in the next few weeks he will play.”

Chamberlain will no doubt be hoping to travel with the Gunners to Swansea on Sunday after a tidy showing against Leeds in the FA Cup. It remains to be seen who Wenger picks as a replacement for Gervinho although with Arshavin and Thierry Henry also vying for a starting berth the boss has a tough decision.

Reflecting on Henry’s attempts to up his game-day sharpness, Wenger continued:

“Thierry works very hard, is doing extra sessions and is highly motivated. He wants to help out so he makes extra sessions to try and get back to his full fitness.

“He is not there yet but he is not far from the level he was at when he left here [in 2007]. He is fit enough to start a game but not fit enough to last or play the whole thing.

“Those are the decisions I always have to make considering the balance of the team. He is here to help out in any way – that is even what he proposed. Does he sometimes start? Does he sometimes come on? That’s what I have to decide. He is in the squad for Sunday.”

Henry has to be the supersub

I don’t understand why Benayoun is behind Arshavin in the pecking order as I think he has a better impact on the team and the game.

Exactly, just like me not understanding WHY I am behind Chamakh.

But, to be honest never Park or Diaby though, as I start doubting if Park and Diaby actually exist.

Quite hope Yossi starts actually. He can offer more protection to Miquel against Nathan Dyer than someone like Arshavin could. Having said that was impressed by Arshavin’s effort levels against Leeds. Showed some real commitment.

I’m really happy we managed to secure the Ox. He seems like a well-grounded kid, and looks like he’s in with a good shout of being an absolute superstar player if he keeps progressing / learning / maturing nicely (unless RVP stays as good for a long time yet). Let’s just hope he doesn’t lose too much of his directness, and start passing when he should shoot..

Also liked the way Ramsey took the FAW to task this week – couldn’t imagine a c*** like Rooney ever putting a point across so well.

* changed our best player to ‘superstar’ without taking the RVP bit out. Hopefully they can both be superstars for us at the same time, of course..

I have a feeling this will be the Russian’s return to form.
Could he do any worse than usual?
Mind you,I thought that about chamakh just before he came on and knocked out van persie.
To be honest I don’t think arshivan has had a decent game since he found out about the 50% English tax law…so we can blame Gordon brown on that one.

the only sam is nelson
Reply to  Rayparlourinho

heh i reckon you’re right about the tax

@Rayparlourinho, lol. And was that not why he fired the agent that brought him to arsenal, when he found out he got far less money each week than he got at Zenith?
Btw, what a curious name you’ve got there mate.

Yep..
..the name comes from my old mate John harper.he used to always call parlour that after he learnt how to play football when wenger first came to arsenal.

So you’re not the real Rayparlourinho?

Is there another? Oops. I’ll have to change my login then before I get my ass banned.

I’d like to see the ox and theo both start. Their pace down the flanks could be too much for teams to handle. If they can handle their pace we’ll just have to bring on the Henry guy. I heard he’s pretty good..

the only sam is nelson
Reply to  Craig

in all honesty i do think TH is now so fast that he looks slow… er… he’s certainly carrying a bit more timber than he used to. must be all those burgers.

still, he can stick it in the back of the net in his sleep and he is a living fucking legend so i’m all for him coming off the bench on sunday and scaring the bejesus out the sheepshaggers. Once RvP has completed his hat-trick.

‘Lenny’ Henry is surely the greatest ever soccer-ball player to have ever graced the British game!

He should never return to those pig f**king red bull ‘tards!

Cosmos, all the way!

Amateur night at the troll awards?

Is that the one yo’ mama hosts?

Congrats on entertaining yourself.

1-0 to the arsenal and thierry scoring again

i wouldn’t rule it out

Eric Irish gunner
Reply to  why is my name required

That will do Swansea play good football

the only sam is nelson
Reply to  Eric Irish gunner

although i wonder if they’ve got a minority of fans who belly-ache about every fucking little splinter life offers up, like wot some of ours do? heh

What does “wot” mean?

You know wot it means. Stop being uptight.

It’s going to be a tough game–Swansea have only lost one game and only conceded a total of four goals at home all season. Three points would be massive.

I’m all for us winning this one early…better that than hoping sometin goes wrong and we try to fix it with a legend who has impressed so far (in a gross total match of 1 for this year we must remember) and hence we cant blamed him if he comes on sometimes n the sun looks away. So I am going to suggest the most unpopular first eleven you possibly can have: Schezny, Djorou, Kos, Per (I pray) n Miguel for defence; Arteta n Song for defensive midfield; Van Persie as playmaker/support striker, Henry as the striker, with Theo and… Read more »

i would like 2 c v.perse along side Henry and in the middle song,Arteta,Ramsy in defence i dont want 2 c djoru,Theo & chamblin shud also start first Eleven

Thorough! You were off and running there – apart from a few odd selections – and then you blew it, Arshavin! A winger? You must be out of your cotton-picking mind. He is accostomed to controlling winning Country and club from behind the striker (s). AW bought him as the next best thing to Bergkamp, then indulged himself in trying to show that he could repeat his relocation success with Henry. Somebody should have said, `If it ain`t broke, don`t mend it`. I blame AW for you – and others – judging him as a winger. Apart from Metsacker, it… Read more »

@Arsenal30. Dont tink anybody has ever complained more about Arsha being played out of position. But its obvious the coach has made up his mind, despite him showing his best form in the CC against Bolton as a playmaker. So I chose my team with the belief that if coach didnt see reason after the Bolton game to use Arsha as a playmaker/support striker, then he never will.

Wenger better play the young guys he has bought otherwise it will be a waste of time. Iit is a risk all managers have to take with the young guys.Results come first.I believe Wenger is too obssessed with kids and overlook the bigger picture which is to make the gunners competitive,
Vela,denilson,etc spring to mind and Wenger is beeing linked with 99.9 of the young players.Arsenal face a serious challenge for the cl berth. Forget about thetitle. If Wenger fails to get the cl berth,I personally believe he should not be given any more time to turn round the gunners.