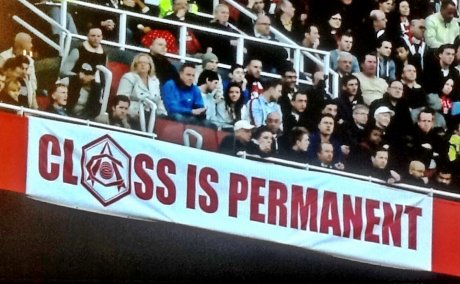 Theo has his two best games with Rosicky there NOT Ramsey!!!!!

WE LOVE THE ARSENAL WE DO.

So we’re averaging 6 at home for the past couple of weeks. At least 4 for extra time should be a piece of piss!

49 thumbs up, 1 thumbs down. Fuck you Rooney

was working at a market in Berlin.so I missed the game.but my mate in Denmark text me all the goals. Arsenal bringing the world together for a good old spud thump!

I fucking love you gunners!

u guys misd something!
0 – Number of shots on target by Van der vaart!

0 – number of times van der shaart was allowed to control the ball with his arm and score.

and number of times we’ve played our first choice back 4? 2 times this season maybe? The team’s defending was good in the second half. It has to be said.

7 – major trophies won by Arsenal since the arrival of Arsene Wenger back in 96;

2 – trophies won by Tottenham in the last 20 years. Both League Cups.

“4 – Interceptions by Parker, Song and Asshole-Ekotto*”

MADE ME LAUGH OUT LOUD

4 RANDOM STRANGERS I HUGGED IN THE CROWD.

Chaz, you’re gonna be a one man thumbs down magnet mate.

1 headache from shouting “come on you Arsenal”

0 – percentage chance those cunts will ever be the biggest team in North London.

– so that his 49 unbeaten record broken!

What an AWESOME performance. 0 Percentage that spuds will finish ahead of Arsenal

193 number of times I said Spuds are cunts in 90 minutes.

This is something Tim posted on a numbers column earlier but it is even more relevant today
100-percent chance Sp*rs are still shit.

2 the number of back spasms i had due to laughing at mooros postings earlier.
3 the amount of visits to the physio that it will take to put it right again.

Sorry mate. As you missed the game, soon as you’re fit, you’re being packed off to Milk Tray land with the Corp for the rest of the season.

100 Bacary Sagna committment and drive (expressed as a percentage)

59.827 – Number of spectators that did the Wanker hand gesture when Hairy Redcunt walked on the pitch.

Today we passed and moved (look at Rosicky’s goal)
Normally we are static and allow defenders to niop in and steal the ball or block our attacks.

This is just about the best comment I’ve read on the game all day, from the Guardian match report… pass it around!

Sagna was great today–I hope the team does pull together and save St. Totteringham’s Day this year.

On a related note, someone get word to Adebayor’s people that Milan has seen how good he is and is ready to offer him a contract increasing his ManCity wages. Maybe he’ll quit on the Spuds _completely_.

Can you make tomorrow’s headline ” ‘Arry sent to twitchcon 5″?

However, hear is what Arsenal has to master: To do the same performance on a soft and uneven pitch.

On a perfect pitch Arsenal can take any team apart!

But today is a day to celebrate, tonight I am having some mash potatoes for my tea.

I think this game showed the importance of 1) going forward through the midfield at speed instead of lazily passing the ball around hoping for an opening, and 2) having two real fullbacks who can push up the pitch, link up with the wingers, and get crosses in.

I also think the game showed that Spurs are cunts.

i think we already knew spurs are cunts

Great work by the lads today!

First post for me and a big hi to all of u!

This game is the highlight of our inconsistent season.
Nice to see other players making a goal scoring contribution as well!

And with Gerv & Ox on the bench, we actually had good alternatives to make an impact of required!
I thought Gibbs & Sagna in particular were fantastic.
& The Theo conundrum rumbles onto next week!

All sounds great. Lets not carried away. We’ve done this to ourselves this season. Lets get carried away when we’re 10 points ahead of Spurs. Still got Liverpool, Newcastle, Chelsea and Man City to play. Plus we’ve got to hope Spurs drop their 7 point advantage. On the evidence of the Blackburn and the game today, we can only say it’s possible NOT certain. COME ON, WE’VE PLAYED SOME OF THE BEST FOOTBALL EVER WITH HENRY, VIERA, PETIT, LJUNBERG, PIRES, SEAMAN, OVERMARS, ANELKA, IAN WRIGHT, WRIGHT, WRIGHT, WRIGHT. SPURS CANNOT AND MUST NOT FINISH THE PREMIERSHIP ABOVE ARSENAL!

*12* — the number of female reproductive organs on the pitch today.

*12*— CUNTS tried to stop the arsenal, by diving an cheating and all out cuntery,.

Just a thought. If the ref believed that really was a penalty then why didn’t he give a card to Gibbs or Szczesny for stopping a goalscoring opportunity?
Probably because he knew it was bullshit. To be fair though, I actually thought he had a good game other than that, the ref.

Probably more times than the amount of goals in the last 2 seasons for him.

I am just absolutes SHOCKED by 46 – Penalties Mike Dean has awarded to other teams since he last gave one to Arsenal… sounds like the league need to take a serious look at this; I know I’m quite biased, but so does that staggering # !

Yes 46!!.. incredible stat.
And it could have been more but the Spuds were unable to make their way into our penalty area to get some more,

Any idea if this means in all matches that he’s reffed or just Arsenal matches?

1 = Number of Bacary Sagnas, and he’s a Gooner

I hope ramsey takes a break until the end of the season. Almost everytime we start a game without him, we win. I have said it before, he is the tumor of the team, and once we get rid of it, we will have a better team. Maybe he is a good sub, but he cannot play the arsenal way in a higher level. He was a flop so many time, and I do not think that will do any good from him. Maybe this will even destroy the promised talent. Rosicky was the heart of the team, and he… Read more »

Maybe he can be our ‘Bale’ in a season or two. Hopefully he becomes as consistent and we can win more games with him in the team. Just a thought

No thanks, we don’t want him to become a diving cheating cunt.