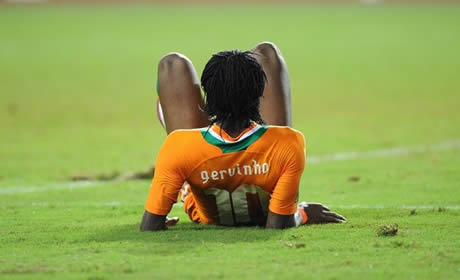 Even the best players in the world can be affected by penalty misses. Who can forget what an impact that miss at Villa Park had on Dennis Bergkamp? It seemed to sap him of all his good ju-ju for quite some time.

And having missed in the shoot-out during the final of the African Cup of African Nations Cup of Nations in Africa, there may well be fears than Gervinho could be similarly affected.

Nevertheless, Arsene Wenger feels a swift return to club football could be just thing the Ivorian needs to find his spark, despite him being obviously a bit glum about the whole thing.

““He was very down when I spoke with him on Monday,” he told Arsenal Player. “Now he is better and hopefully he can contribute on Saturday”

“We don’t know [what impact the Africa Cup of Nations will have]. I see Yaya Toure played on Thursday night for Manchester City and sometimes the best thing to get things out of your system is to play a game and have a performance.

“When you are young it is important to focus on the next game and show you are a good player.”

Meanwhile, Johan Djourou, who suffered a torrid time filling in at right back, says he can regain the form that had him so highly regarded just 12 months ago as he returns to the centre of the defence in the absence of Mertesacker and Laurent Koscielny.

“I am happy to be back in my position and to show what I am worth,” he said. “This season has been a bit harder for me. I have had to play out of position where I am not used to but I have tried to do my job, but I am not a right back.

“People forget and think that if you play in a position, ‘Johan Djourou is a right back’, but I am not, I was there to help the team. Now I am back in my position and I will show everyone my qualities.”

This is the sort of situation where you see whether a player has real mental strength or not. Hopefully this can shake up something inside him and give him that extra grit he needs to focus his mind. Come on the forehead!
Oh, that sounded kind of wrong. Ewww…

Tonight Coq could get it on his forehead…

… with a beautifully weighted cross

Unfortunatly a lot of cunts seem to have a hatred of all things Arsenal these days. (talkSport, Sky, MOTD, Pundits and most commentators)

The best course of action is to ignore it, let it go and just support the Arsenal as best we can…

…and maybe wish cancer on the fucking pricks.

I’d love to see Gerv on the left and Chambo on the right.

But not nearly as much as seeing all of our players leave the pitch having won, and without any more damn injuries.

The Swiss defender to show his real qualities.. Of dragging players down in the box after getting Easley beaten.. Our very own Jamie carragher.:-D

kunzeboom
Reply to  Bob's your uncle

people should give djourou a break (as in not singling him out) no, he hasn’t had a great season so far, but neither has the verminator as a left back — still he is generally seen as indispensable, our best defender. it’s not that I want to say vermaelen isn’t vitally important for us, but he didn’t do particularly well on wednesday either (which is an understatement) and it was him who slipped when robinho banged in their third. think both of them need to get used to their preferred position again. yeah and stop playing like school boys, starting… Read more »

bob's your uncle
Reply to  kunzeboom

but if you are playing shit ,don’t bang on about your great qualities. take a look at how many times he brings player down after being hustled off the ball. ,, and please don’t say give one player a break ,then start digging into another..moron.

Forehead has been great for us considering this is his first year ,He works hard and almost always beats his defender , he is still blending with the rest of the team and adapting in the league, I expect his Assists and Goals to go high next season and later on this season.

i am happy zhervinyu is back and even more happy because i get to hang out with Theo.

Coquelin to replace Ramilson, Ox for Walcork, Gev on the left. 4-2-3-1 formation and the above 3 can even switch position. Ramilson and Walcork don’t even deserve to warm the bench.

Cnt we beat em 5 nil at the Emirates?

With the Ox scoring all 5 🙂

Martin O’Neil has done his home work. Wenger back to sameO, sameO. Bad, pitch, bad conditions. Wenger proving that he is not a deep thinker.

Only a miracle to see us through this one!

Well, he did have Arsenal’s only shot on goal in the first half!

Well beaten! Arsenal cannot complete the marathon. Players simply kicking the ball and hoping for the best, not able to think on the ball. Another, sad, sad day and looooooooong and painful weekend. Players just cannot play on rough surfaces!

Even though he’s missed a few sitters for us this season, I don’t want to criticise Gervinho. He’s not been in the EPL a year yet, and he deserves more time to find more end product and a composure to his finishing. However, I’m not so sure he was the type of player we desperately needed. I know we got Arteta & Mertesaker but we needed a finished article up front too, not another player that needs time to develop at Arsenal. Players like Walcott etc have been given ample time to improve when a better, more accomplished player could… Read more »

Is he giving birth in that picture?