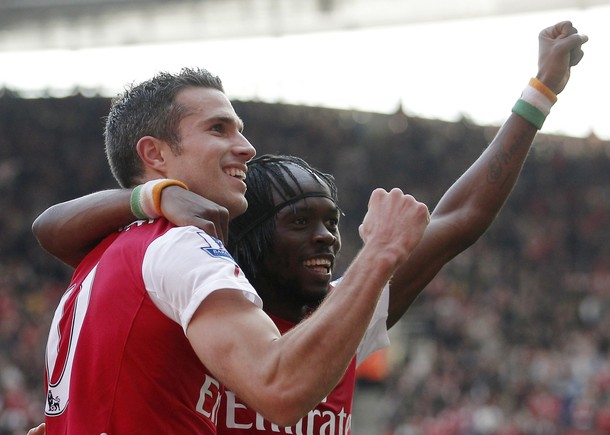 Returning his focus to all things Arsenal after suffering heartbreak in the final of the African Cup of Nations with Ivory Coast, Gervinho has taken the time to reflect on the influence of Robin van Persie and stressed again his desire to see the Gunners keep hold of the striker.

“Arsenal is a team that needs great footballers and leaders on the pitch. Robin is a player that pushes his team-mates to work more and do more during a match.

“It is a dream to play with him. He is the captain, the leader of the group, there is no doubt.

Having previously labelled Van Persie as ‘the boss’ Gervinho also believes that the in-form hitman’s reputation extends far beyond the  Emirates:

“I could see it from my very first day at the club. I believe when our adversaries see Robin in the team, it is a huge psychological shock.”

One only hopes we’ll make good progress in the 3 competitions that we’re still in so as to persuade RvP to stay with us and convince the likes of Hazard to come and join us instead of joining forces with the ‘dark side’. Plus, he’s already the ‘boss’ here, so please Robin as Al Green once said: ‘ Let’s stay together…’

feygooner
Reply to  What's my name?

What's my name?
Reply to  feygooner

Might be true, but is signing a winger mutually exclusive to signing an AMF, or a player in any other position for that matter? Any talented player who’d add real value and contribution to the team is worth signing, methinks.

Since Hazard would cost a lot and it’s doubtful that a top quality AMC who could play well straight away would come cheap, I would say yes.

kunzeboom
Reply to  What's my name?

re. le hazard: I always try not to judge people by quotes picked up from the media, but…when I read that he considers a summer move to sp*rs because they’re such a great club…or ‘yeah maybe spain, but if so only real or barca…’ that kinda put me off..

Syed
Reply to  What's my name?

It is what it is

Kenyangooner
Reply to  It is what it is

…whether Times are good or bad, happy or sad…

you make me feel so brand newww,
I want to spend my life with youuuuu… ahem.

What's my name?
Reply to  Kenyangooner

Whaaaaiy (somebody)
Why people gon’ break up?
Turn around and make up
I just can’t sEEEEEEeeeeEEeeeeEEEeeee……

I’m betting the opponents’ psychological shock is owed to Gervinho’s hair. Sure it helps to cross to Van Persie, but Gervinho need not sell himself short. He and his hair have been good for The Arse.

I could land a plane on gervinho’s forehead

we, the fans, should stop wishing for Hazard. His attitude will be worse than nasri’s. Not long he wanted psg (france). Now it is spur. Do we really need player like him? What we need are players that love our club and likes playing for us.

I totally agree with you. His comments (however reliable they are) stink of a Nasri-ism. I’d much rather a player who isn’t so highly opiniated, or at least publicly, about all the teams he could play for. What does it say about his own ambition that he would even consider playing for Sp*rs. You know that if he came to us, he would be demanding top dollar right from the start. Within 2 years, his wage demands would be unsustainable (perhaps not the case had we not committed so much tripe in our squad to long term contracts) Rather have… Read more »

What's my name?
Reply to  David-Maria

Even King Henry himself has openly admitted that it was only after he’d left the club first time around that he truly fell in love with it and became a fan. So it could be hypocritical to demand love for the club from prospective employees…Did Arteta love us before he signed? I wonder. Yet he’s been truly brilliant for us thus far and committed to our cause. Admittedly, it’s idealistic such as when we sign Jenkinson and Per this season, who were already loyal fans of the club, but probably detached from the realities of professional sport. My thoughts.

legio
Reply to  What's my name?

I’d rather he didn’t whore himself out to every club willing to listen. If he could do it now, chances are he’ll do it if he signs for us.

I applaud your wisdom. If he is willing throw himself out of a club who made him and has been in and out of Champions League, surely after 3 years we sign him he will do the same to force a move to Sheikh City, Barca or Real.

I say to hell with him and if we need some attacking talent actually get someone proven and talented. Too bad we couldn’t sign Pirlo when AC let him go.

It seems to me like Van P wants to focus on this season and then see where we stand as a club before deciding whether to commit his future to us. Whilst that’s understandable to an extent, the bigger picture here is that we’ve stood by him, for a long, long time when it looked unlikely that he would ever spend more than a 2 or 3 months on a football pitch at a time, at best, before suffering an horrendous injury. In light of our loyalty, I think morally he owes us another couple of years. I also realise… Read more »

Gervinho, player with great ability.
If only he stops being gervous in front of goal, he would be counted as one of the best in his position.

Kafata
Reply to  The invincible arse

The problem is that, he’s not playing the right position. He could be better than Falcao what with his forehead if he played a more central role.

Have you seen his finishing?

It was a joke, mate 😉
I really hope the best for Gerv. If he does improve his finishing, he’ll be amazing.

Well we know about rvp shocking opponents but i am sure they would be more shocked with gervinho’s forehead.

If our rivals are shocked by RVP, are they also shocked at our fast emerging coq?

I think they’ll be more shocked when they see our coq thrusting deep into their defence.

time for Gervinho to come to the fore…

I think judging by VP’s swift and definitive rebuttal to Marca rumormongering, he’s no Nasri. Also his boyhood clubs aren’t going to win the CL, ever, so he has no emotional impetus to want to leave. he’s loved here, he’s in the form of his life, he’s captain and role model at one of the worlds biggest clubs. And it’s not as if we haven’t been close to trophies so it’s far from hopeless on that front. To say nothing of how the club has stood by him all through his injury woes. Why wouldn’t he stay? Re: Hazard, Lille… Read more »

Re: Hazard, he’s obviously trying to get an auction going for his services so he can secure max £. Not a terrible crime in itself, but if you’re willing to publicly whore yourself in this way and drag your name into the same muck pit as spurs to achieve that, then as far as I’m concerned he can jog on and spare us the mercenary cunterry. Go straight to City, do not pass Grove.

funny thing is, the amount he’ll probably want, Sp*rs would never be able to afford to pay him it anyway.
I think he’s nailed on for Man City, Madrid or Barcelona, or Chelsea IF they get into the Champions League.
I don’t want any arrogant cunnies at Arsenal. They ruin team morale and create more problems than they solve.

Is Gervinho available for tomorrow?

The invincible arse
Reply to  Niro

“I could see it from my very first day at the club. I believe when our adversaries see it in the team, it is a huge psychological shock.”

Gervinho speaks about that growth he calls a forehead.

I sure hope Gervinho is available for tomorrow. I can’t wait to see him and our other speedy wing players run at that aging Milan defense.

gervinho is still in africa and the soonest he could be available will be saturday. so it will probably arshavin or maybe the ox.

but what aging milan defense? they will probably play mesbah (27)/antonini (29), mexes (29), thiago silva (27), abate (25). those are defenders in their best age and some of the best in the world (especially abate, who i would rate on pretty much the same level as sagna)

I’ve hear from milan fans that abate is a mistake machine, but I’m afraid of thiago silva

Terrifying quality they have at the back…

Gervinho likely won’t be able be available til Sp*rs at the earliest.

Hopefully he doesn’t come back with a heavy heart. It’s too bad that cunt Drogba couldn’t have put away the penalty that Gervinho earned or he’d be coming back a national hero. Drogba always has to try and fuck us over.

Our top quality AM should be back within about 1 to 1.5 months. Wilshere and Arteta are actually both top quality.

Last year, Jack played the box to box role because we had one of the best AM’s (before his head got turned). This year, Arteta plays that same support role because he’s better there than Ramsey and really holds on to the ball. I’d really like to see Arteta unleashed in the AM role. Then you’d REALLY see how under-rated he’s been.

Smells like football manager. 😛 Ok thats a low blow. On the serious side IMO, Arteta thrives being in that role where he can see Attacking play and Defensive play as he’s got the quality and experience to boot to add a layer of intelligent defending. Only time I see he fails in defensive duties is when he is out paced or out strength. I think Jack on the other hand will thrive in that point in our 3 man midfield which also acts as a striker in the hole. I think Jack’s pressing and tenacious quality will suit him… Read more »

[…] in all likely rest Gervinho, who’s back from his African Cup of Nations duty, and had some good things to say about compatriot Robin van Persie. It will be either Arshavin or The Ox on the left, the latter […]

Suddenly we’ve gone from having no great wingers to potentially having 5. The Ox, Walcott, Gervinho & Arshavin on their day can be extremely dangerous out wide although i still think the russian should be playing striker. And from what i saw from Miyaichi’s 45 minute cameo on the weekend, he is going to be a huge player for us. i could not believe the quality of his left footed cross for someone supposed to be right footed. not to mention the paaceeeeeee

I have to explain it in terms we can all understand. If it were as simple as sticking a few CM’s out on the field, then Lampard and Gerrard would play well together and we all know that’s not the case. 😉

When we signed arteta, jack said on twitter that it was “the best news of the day” and that he was a “quality signing”