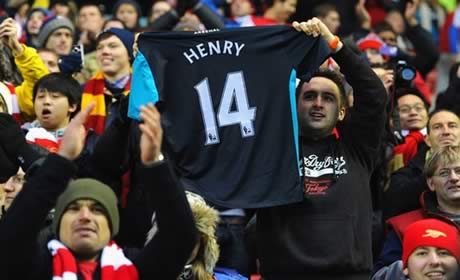 Thierry Henry said he felt like a kid when he scored Arsenal’s winner against Sunderland, but he was quick to praise the supply from Andrei Arshavin.

The Polly-Pocket Russian has hardly been flavour of the month, but his perfectly weighted cross from the left fell perfectly for the legendary Frenchman to finish from inside the six yard box.

“Andrey’s cross was amazing,” he said, “all I had to do was get a touch. It was perfect.

“You have to give him credit. I just had to get on the end of it. You can always miss but I was just the guy who put the ball in the net.

“I really must say I was on the end of a great cross. It just happens that it was me in the last minute so it is a story. But the most important thing was the three points whether I was in the team or not.”

Henry also praised the Sunderland fans, saying, “It’s always been a pleasure to come to Sunderland. I’ve always found this a very special place to play football and, when I was warming up, the fans near me started clapping. The atmosphere was fantastic.”

But he saved his celebrations for the Arsenal fans, spending some time with those who had made long journey north.

“It being my last Premier League game, to score in the 90th minute was so special, something really magical.

“I stayed a bit longer with the Arsenal fans because I knew it was my last game in the Premier League so I wanted to say ‘Thanks, that’s it’.”

“Sometimes you never know when something is going to end,” he said. “I guess you can never say never. I never thought I was going to come back and play for Arsenal now. Who knows if I can say that this was definitely the end? We’ll see.”

And it’d be a foolish man who’d bet against this love story being completely finished.

Lets sign him up in the summer as a player/coach!

“Arshavin” and “perfectly weighted”. Can’t say I’ve seen those words together in an article before.

Booo. It’s not been that bad. Most recently against QPR I believe. Take a look at his assists this season, you’ll be surprised.

That’ll explain that whooshing noise then.

Arshavin has got more than his fair share of assists.

Maybe watch some games instead of just jumping on the bandwagon.

Thanks for the advice. A week ago I was suggesting he play behind RVP, in his favoured role.

I like the little man. The initial comment was a joke and a reference to his weight, not a dig at him.

I’d actually give him the wide berth against Milan, over Theo.

Tears of Coors lite streaming down my face as I was behind goal when he scored and I witnessed a true LEGEND and great man… Hope that’s not the last memory of him !

I’d get me tear ducts checked if i was leaking light beer….

Would you? I’d just open a pub.

The away kit is a shame.

Just noticed the guy in the picture has this year’s away kit but with Henry in his old #14.

He has to be groomed to replace Wenger. We are not a club where you could bring in an Ancelotti, Hiddink or even Mourihno. The whole ethos of the club is based around Wenger’s style of play, attention to detail, youth policy and financial stringency. The same way Barcelona approached Guardiola, he was the the club through and through and he has proved that counts for more than experience. If Henry came back in the summer and shadowed Wenger for a season, perhaps on a lose player/coach basis and then the following season became his assistant (I think Pat Rice… Read more »

I don’t think Henry would be a good manager after retirement seriously. I think he should go into stand up comedy – he’s just that type of guy.

Hasn’t Wenger already been grooming that Yugoslav dragon guy? Used to be quite a player too, apparently.

I like the idea of someone like stojkovic coming in. He’s already won titles, and would presumably command a lot of respect from the players. Henry can then takeover in his 40s, perhaps.

@Spooner – I think it would be great for a Dragon to manage in the EPL. I thought the BPL may have come out of Swansea being in the league. Forgive me, I’m Canadian. Cheers.

[…] What a way for Henry to sign off from the Premier League [again!]. Credit has to go to Arshavin for finding the space between the two defenders and The King made it look so simple as he always does. Being the legend he was though, he didn’t want to hog the headlines. […]

Well said Titi, praise of arshavin so publically will do wonders for his confidence and will probably soften up a few fans’ attitudes towards him (for the short term anyway heh)

Let’s hope that cross gives Arshavin some confidence. He certainly needs some. Perhaps it will make him care a bit more about his employers and give a bit more the lazy fuk