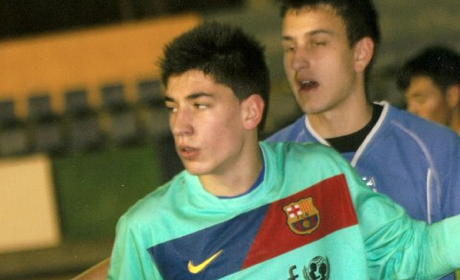 The other youngster acquired from Barcelona last summer Hector has, like fellow former Catalan Jon Toral, made a seamless transition to life at Arsenal and has impressed thus far in his maiden season at the club.

Despite having operated mainly as a right-winger during the latter stages of his Barcelona career, Bellerin has tended to feature as a right-back for the Gunners, although he has still managed to get forward to deliver teasing crosses on several occasions.

Quick both on and off the ball, possessing good technique and an impressive work-rate, the Spanish youth international did find the defensive side of the English game difficult to cope with initially, but has been making steady improvements in that regard and is now making key contributions at both ends of the pitch for the under-18s, setting up goals and making crucial interceptions.

A professional contract will automatically follow when he turns 17 shortly, and Bellerin will be hopeful of making his Reserve debut before the season is out having previously impressed in the FA Youth Cup defeat to Derby.

With every step of his progress being monitored by the coaching staff from the first-team downwards, Bellerin will be hoping to continue his steady progress with the ultimate aim of following in the footsteps of fellow former Barcelona players Cesc Fabregas and Ignasi Miquel in breaking into the first-team picture.

Is this Barcelona’s way of eventually getting a team in the Premier League as well as La Liga?

anything at the new medical centre that can alter his DNA?

they are trying, he is on a diet of cider and nandos. it worked well with andre santos who now refers to himself ans andy wood but it does cause weight gain.

him and toral have been impressive from what ive seen and read, heres hoping he doesnt ‘do a cesc’ and jets back. i heard his contract has a buy-back clause (typical barcelona).

sadly he has already said he would love to go baack one day, it was about a week after he signed

well. in his defense, he IS young and naive, and hence has the tendency to say some stupid things.

He already has the look of a petulant, stuck up pr*ck.

With that attitude, it’s hard to work out why some players don’t want to join Arsenal… Good grief

People don’t want to join Arsenal because people in a remote corner of the internet are joking about their appearance?That’s a new one.

Don’t understand the many thumbs down though, G?

Especially when the comment is almost repeated exactly below with the same amount of thumbs UP!?

He looks like Nasri and Suarez’s lovechild.
Just talking about the looks here mind…

Remember when Barca wore that green kit to the Emirates last year?

I was happier than anything my right palm could do to me later that night.

Lets just hope he live to his potentials. He’ll be sold before his 25th birthday if he is good.

I saw both these lads in an under 14[s tournament here in Totana, Murcia and neither stood out then. Strangely the lad in the squad that did has disappeared from Barca’s books now.

Here’s hoping that they both do well for us and are in trophy winning sides for The Arse’ for ,
many years to come.