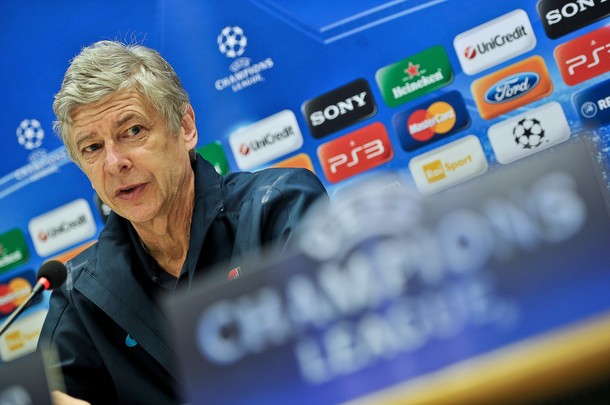 Arsene Wenger is very concerned about the state of the San Siro pitch ahead of this evening’s Champions League clash with AC Milan.

The reigning Serie A champions, who share the famous arena with neighbours Inter, laid new turf on both flanks on Monday night in an attempt to patch up areas seriously damaged by the recent cold weather. However, after seeing the state of the playing surface on arriving in Italy it’s safe to say the boss is not impressed.

Speaking to ITV he remarked: “It’s worrying. They re-laid the pitch on the flanks on both sides on Monday and we play on Wednesday night so you can imagine that to get the pitch flat [is difficult]. All the different levels of the grass they have out there is terrible.

“You cannot congratulate Milan for the pitch they offer us tomorrow, but they have the same problem. I think as well respect for the supporters means that you have a decent pitch because Milan is a technical side. They would certainly want as well a better pitch than that.

Asked if he thought the pitch had been prepared deliberately to counteract the pace of Theo Walcott and Alex Oxlade-Chamberlain, Wenger continued: “I hope not. I’m not suspicious on that. I think they want as well a good pitch. They tried to make it better than it was and they’ve made it worse.”

Last weekend Per Mertesacker suffered an injury catching his studs in the boggy turf at Sunderland’s Stadium of Light on a pitch which Wenger made clear was unacceptable.

Given that Arsenal return to the North-East to face Martin O’Neill’s side on Saturday in the FA Cup we can only hope that three games in quick succession in poor conditions to not claim more victims.

Ffs. Last Saturday, tonight and next Saturday too. I know we can’t play on a carpet every week, but for a massive Champions League game it’s a disgrace really.

That’s the problem with the San Siro, it’s being played on every single week, sometimes twice a week, because Milan and Inter share it. Makes no sense for two top sides. Can you imagine having to share a stadium with Spuds? ugh.

(Not to, of course, imply Sp*rs are also a top side)

I still dont get it how two big rival clubs like inter and Ac milan share the same pitch not botherd to search the history who had the right over it but still curious.
I remember the talks of sp*rs loaning our stadium atleast we had the balls to say FUCK YOU COCKS.

A “We already have a Coq at the Emmirates” would’ve worked as well.

No matter how we have to change our game and tactics, let’s just hope no one joins our BFG.

I’m trying hard not to be a conspiracy theorist. No they did not screw up the flanks to stop the Ox. Italian football is fast too….

How can one of the richest clubs in the world have such a disgraceful pitch? It’s almost as disgraceful as the Wembley pitch was a couple years ago.

Come away tonight with a win and no injuries please!

Oh u mean how can two of the richest clubs have such a dreadful pitch… Imagine that!

LOL,touche’… I meant to correct that and hoped someone else would pick up on it.

Getting the excuses in early typical Wenger…..

After he shared his concerns about the pitch pre-game against Sunderland, look what happened to Mertesacker.
It’s only fair that he is annoyed about the state of the pitch of a team who are World Class and have 7 Champions League titles.
Imagine the same thing that happened to Mertesacker happens to van-Persie. I bet you won’t you won’t be talking about “excuses” then.

You forgot the ‘Savage’ after at the end of your name, you twat.

Getting the abuse in early, typical doomer…

Is it me or does the fact he speaks so strongly about how THIS pitch isn’t suspicious as Milan are a ‘technical side’ seem like a thinly veiled jab at Sunderland *maybe* preparing a beat-up pitch as it would play to their strengths? Obviously they’ve had bad weather too but it was a seriously awful surface.

I reckon you might be reading a bit too much into his comments… Have you ever considered a career as a newspaper sports writer?

Not a bad idea, except I’m not sure I could stomach the free lunches with ‘Arry.

Or a 4-3! Remember, the more goals away from home, the harder it’ll be for Milan to overturn the result back at the Grove.

at least they’ll be used to playing on ploughed fields by saturday.

I really hope that we get no injurys, I think the fact Wenger highlighted the crap pitch means our players have a duty to themselves to be a little carful and play to the conditions. Feel good about tonight, can see us getting a cheeky away goal. COME ON YOU REDS

At least we know the pitch can’t be as bad as it is for the Benfica v Zenit game. Worst pitch I’ve seen in a long time.

I just saw that pitch for the first time on TV; looks like shite.

what an embarassment clear out the whole lot this is the worst performance ever. What we have seen is a shower heartless gutless overpaid wankers. Wallcott ? defending? midfield none, manager has lost it………….

No, the pitch WAS horrible, but it’s clear the result was all the fault of the players…

Shitty pitch for both sides…shitty excuse by manager.

It is the same for both teams. Any excuse fir not wearing proper studs. Our players need to grow some b*lls

I mean, anyone who hasnt seen it go Youtube Match of the 60’s or 70’s or even the 80’s, then you will see shite pitches every game….

They literally could not pass on the deck, they had to boot it in the air to get the ball to move out of all the water and soggy mud.

The San Siro pich was like Wembley compared to those pitches.