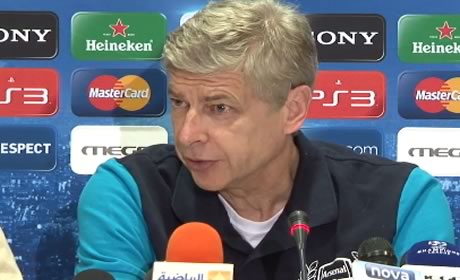 Arsene Wenger has criticised both the Premier League and players unions for the 25 man squad rule which he says is responsible for the flat January transfer window and which will ultimately damage players careers.

Speaking ahead of Arsenal’s trip to Sunderland, Wenger said, “You see nothing happened in the January transfer window, because everybody has 25 so if nobody buys nobody else can buy.

“It makes common sense when they [Premier League] sit together there at the table, but they must never have really experienced what it is to take a risk or gamble on players.

“If I have to buy a player, I have to kick somebody out.”

When quizzed as to what the solution is, probably the most obvious question of all time considering his opposition, Wenger said, “The answer is to leave it open.

“What is even more surprising is the union accepted it. They produce unemployment for players.

“You will see the number of players who will have no jobs. The clubs will sit down with the players and say ‘we cancel your contract and pay you off’.”

Arseblog News is with the boss on this one, the continual, arbitrary squad rules they keep bringing in are difficult to understand.

Next season we hear that each squad must have at least three players with the letter Q in their name,  meaning the likelihood of moving Squillaci on is now slim at best.

on the other hand, guys like adebayor are rubbing their hands in glee since one of the supposed rules next year is atleast 1 player should have “cunt” in their name. sp*rs and stoke are the teams pushing for this rule.

I think Man City is another team pushing for that rule as well mate since they got the biggest cunt of all playing for them.

But it has also stopped shitty from buying more players, otherwise there would have been more footballers who earn huge sums but still not playing .

a good point, that.

And what’s wrong with that? Let them ruin themselves to impossible debts.

“If I have to buy a player, I have
to kick somebody out.”

Exactly gooner. With some of the shite that we have on the fringes we cant use the 25 man rule as an excuse not to buy.

wenger please go for SHAQUIRI. he has Q. hahahaha

More excuses from professor arsehole. He only buys under-21s like Eisfeld anyway, so what’s the problem. If you want to make room for someone, delist Squilacci. Once again, the great liar tries to cover his tracks to avoid questions about why he didn’t buy. He didn’t buy because’s arrogant and wants to prove everyone wrong.

I refuse to accept that you’re a gooner

get out you shitspur lover

yeh, bloody arsehole…
er, hang on, so Arteta, BFG, Santos, Koscielny, Vermaelen etc etc etc were under 21s were they?
I think someone else here may be a “great liar”.

You test! If you were an agent, wouldn’t you insist on a “delisting” clause. Why do you think ManC still have to pay Wayne Bridge? His central point is contractual obligations make it prohibitively expense to delist players. Twat!

Consider that the three of them has had a history with injuries, esp. Verm and Djourou.

Consider that we only have Song as the most viable 4th center-back and only Coquelin as back-up in that midfield role.

And you’re probably the first one who yelled at your TV when Andre Santos went down in Olympiakos, cursing Wenger for his dreaded stupidity and arrogance.

He’s a lying bastard. If Eden Hazard became available on the cheap in January and said “I want to go to Arsenal”, you telling me Wenger wouldn’t find a way of dumping someone from his 25 man squad to make room? He could terminate the loans of Henry or Benayoun for a start.

I’m sure if Eden Hazard had become available on the cheap in January you might have seen a pig flying overhead.

doesn’t terminating a loan cost a lot of money anyway?

The 25 man squad rule leaves team that play in Eurpe at a disadvantage in the Premier League. Because of extra games they are much more likely to pick up injuries or suffer from fatigue, meaning fewer of the 25 are likely to be available for selection than in a squad that only competes domesticly.

Why are football managers always “slamming” and “blasting” things? They should be more careful…

I think the 25 man rule isn’t a bad rule it makes things more akward but at the same time your allowed as many under 21 players in your squad who don’t need to be registered. I think the biggest 2 problems are 1 he should have shipped his dead wood out in the summer and 2 I think the FA should revert the rules back to when there was no transfer windows and it was always open there never seemed to be any real hassle back in those days.

Well wenger is making a point for himself,course I don’t understand why chamach remaind as an arsenal player not nicholas berntiner or vela which are seem to be matter then chamach

yeah, whatever happened to Nicholas Berntiner?

Really, Mike? Really?! Even after charges have been file against Bendtner for destroying property after a night out with Lee fucking Cattermole, you cannot think of one reason* why Arsene wanted to keep Chamakh instead? Really!?!

*As a jewish baby might say to the mohel, “And that’s just off the top of my head.”

No it is definitely a bad rule because it is anti-capitalistic and hence creates unemployment and reduces quality.
Wenger is speaking in general terms not just for Arsenal. For is it probably means that we have to now keep hold of less talented english kids while selling on more promising foreign players.
The idea behind the rule is to help local players but in diminishing competition it actually hurts them.

I’d like to see a rule of a squad of 30 for all, including youngsters with the transfer window closed for the entire season. Players need to show more commitment and it would certainly stop money grabbing youngsters and na$ri types think twice about signing for a big club to sit on the bench for a season. I would introduce a rule that doesnt allow loans within a league – elsewhere or a different division. let’s all be honest arsene rarely suggests a rule without his own agenda hidden somewhere. He’s just annoyed he’s got so much crap or players… Read more »

Sorry haven’t finished (like daglish not seeing handshakes I didn’t see the submit comment button). Other players we nee rid of next season = arshavin, Chamakh, park, watt, benayoun, vela, hoyte, aneke. This has to be around 300k per week total or more. Use all this salary to buy two high class attacking players. Not yet sure about ryo and campbell but certainly can’t rely on them and theo ‘someone touched my shoulder, where’s my penalty’ Walcott. What’s happened to our standards gooners? Walcott is spurs player! We cheer for him if he makes two runs in a half! Remember… Read more »

Sell Aneke? Really? How do you know how good or bad he is. I’ve only seen him play once, and that was at the U118s game they organised at the Emirates after the home league game against Sunderland I think. And he scored the only goal. So I can’t think of many reasons not to give him his chance. But what did happen to Gavin Hoyte? And I think Vela & Bentdner are pretty much already gone. And will people please lay off Arshavin. Yes, he’s been poor, but he still has decent numbers, and is unfairly scapegoated (note, NOT… Read more »