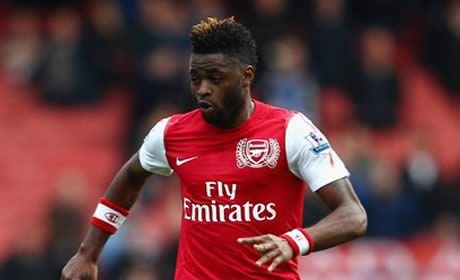 Although most people would view Alex Song’s role in this Arsenal team as primarily a defensive one, stats, as they often do, tell a different story.

As pointed out by 7amkickoff on this very site, Song’s numbers are very interesting from an attacking point of view. A glorious assist for Theo Walcott’s fifth against Sp*rs was eye-catching, he set up Thierry Henry for his magical Leeds goal, and he has twice supplied Robin van Persie for his best goals this season.

Merseyside fans won’t like to be reminded but the similarities between the passes for van Persie’s goals against Everton and more recently Liverpool are striking.

Of course van Persie has to take much of the credit, the finishes were sublime due to their difficulty, but Song’s assists deserve a mention and are borne out of hard work on the training ground

“I work well with him in training and I know how he moves,” said the Cameroonian.

“When I have the chance I try to give him a good ball, and if I do that then I know he can score at any time.

“Everyone knows that Robin can make the difference in every single game he plays. We are happy and lucky to have him in our squad,” he said.

And although Sp*rs dropped more points at Everton yesterday, causing Harry to reach TWITCHON5, Song knows that Arsenal will have to continue to work hard for a top four finish.

“There is still all to play for and anything can happen.

“We have a big game against Newcastle, and we know they are also in the fight for fourth place.

“If we win that, and open up a bit more space between ourselves and the other challengers, then we will be in a good position.”

I wonder if he”ll stay on though? He has rebuffed all approaches for a renewal from the club so far.

Stop reading exclusives from the daily mail. They will drive you crazy.

Just because its not good news, doesn’t mean it has to be from DM. Even arsenal dot com had a column saying his contract expires in 2013 at the beginning of the season. As for the contract rejection stuff, I have read it in various arsenal blogs. But who knows for sure whats happening?

Wait until May. You’ll find out soon enough. No need to drive yourself mental from reading the DM.

Has he? Wow I didn’t know that. When does his contract end?

I wouldn’t mind too much if Walcott goes (altho I would like him to stay and learn from the Ox lol), but Song or RvP leaving would be horrible.

Hence why we seem to be wrapping up Podolski early, instead of waiting till August.

And …er… That assist for RVP at home to Dortmund.

Bob's your uncle
Reply to  gooner

One of the best I ever saw

For me and don’t get shocked. The best assist was against Norwich second, the reason for that Gerv was in a better position and has just missed an open goal, he looked for the difficult pass to the man that was going to score rather than the easy pass to the man won’t..

I hope he’s doing what Robin’s doing and waiting for the club to show intent to compete. If we retain Robin’s services then I think both Theo and Song will commit to new deals.

I somehow feel confident Robin will stay, he seems to really love the club.

And, off topic, I cant wait to see Ryo in a gunners shirt on the flank. Has an amazing first touch, has pace, quality of passing and gives 100% every game.

Just loved watching the Twitcher on tv last night.Is he really the right person to
Manage England.
His comments were hardly those of a sane man and they were only slightly
more understandable than Capello.

Off the subject I saw that AW re-iterated that he could write a book about last
summers shenanigans.It will be 5 words long…………..
Nasri is a female orifice. (AW wouldn’t use the C Word.

I’ve got a hunch that Arsene is not to blame for the lack of spending money.

I think it’s pretty clear that Wenger wanted to keep Nasri even if he went on a free in 2013, but Kroenke sold him. There was an interview in which Wenger was adamant that he would not sell Nasri.

Song beta sign an extension, good to hear that the only injury for tomorrow’s game is Diaby(and wilshere ofcos) . We will win that game tomorrow with the players available. Spurs probably feel like burying their heads in the sand right now lol.

You could say they’re working in perfect harmony with each other.

And Nasri is a cunt.

Chamberlain is already so much more effective than the lesbian ever was. Not missing him.

Bob's your uncle
Reply to  Einstein

Looks like good money on no chin now,and we got the ox with 10 mil on top..nice one wenger.

Yeah this season i have always seen Arteta as our main holding midfielder. He rarely gets forward and i think this confuses alot of opposition because it allows Song to get much further forward than people would expect or he gets in great position to give the final ball. His quality in his all round performances have been nothing short of brilliant, his versatility is unbelievable and im sure AW has not let his performances go unnoticed. Arsene, Sign him up.

song and arteta have always been solid for us this season and when they did not play they have been missed badly.of course we had lots of other guys who were thrown in to fill the AMF role.ramsey,rosicky,benayoun,coq but they all had their injuries or ups and downs. i believe giving the song and arteta pair a real boost in summer by getting a solid AMF with character will do the team lots of good and will perhaps complete our midfield in terms of being worldclass.don’t forget we have wilshere and diaby waiting to return.but still benayoun is leaving and… Read more »