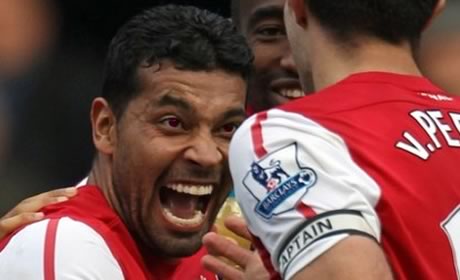 It struck me the other day that an anagram of Andre Santos is Satan Drones. Then I worried that the dark lord of the underworld had sent the Brazilian, via Turkey, to Arsenal, to use the club as a conduit for evil.

Then I stopped worrying because it would be pretty damn cool if that happened. Of course life being life it would end badly. The devil cannot exist without god, and as god is omnipotent he always wins the end but we’d have some fun along the way.

The chances are, however, that Andre Santos is just a Brazlian football player and not one of Beelzebub’s spooks, because he’s spent 3 months out injured and surely with all his cool powers and shit, Lucifer would not let one of his men suffer unduly. Unless he’s such a twat that he even makes life awful for those who serve him.

Either way, the point is that Andre is back in action, and last night played an hour for the reserves in their 2-0 win over West Brom.

Speaking to arsenal.com, he said it was great to back and he was looking forward to playing a part in Arsenal’s crucial run in.

“”I am very happy to be playing again because it has been a long time,” he said. “I feel good and I hope to be able to play next week at Everton.

“It has been a difficult time because my ankle was in pain and I didn’t feel good, but now it feels good again and I’m very happy to be back.

“I’m really pleased the team have been doing so well. The displays have been strong, the spirit is good and we have 10 games left so we must finish well.”

Arseblog News’ youth correspondent, Jeorge Bird, gave Santos a healthy 7 out 10 for his performance, saying, “Broke forward effortlessly and impressed with his enthusiasm before being withdrawn.”

With Kieran Gibbs now fit and Andre on his way back, it augurs well for the future, regardless of whether or not they’re operatives of the underworld.

Fantastic news! Love Santos, and it gives us a great attacking option at left-back if we’re chasing a game. At the moment Gibbs has to be first choice – been massively impressed with the way he’s played considering his awful injury record. He seems to have got up to speed really quickly – if he can maintain fitness and get a good run of games under his belt, I think we’ve got quite a player on our hands in KG.

With 2 of the 3 great centrebacks fit too.
Supernatural.

In opposition goalmouth yes! This guy is terrifying, I’m just glad he’s ours. Welcome back Santos.

Looks like the new treatment table is working well!

BTW Bloggs is one bloody atheist… nice though 🙂

Back to help us!

Actually loved it when he played. Don’t think either kg or santos will be first choice. Probably just rotating between a handful of games.

Verminator and the Prince of Darkness- who said we were a team of softies?

You know else has hands?? the devil!! and he uses them for holding!!

You guyz have no idea what we are missing and why I justify Weneger not to sign. Diaby and Wilshere are top top top players who can play in the centre and on the wings. Especially Diaby, my favourite arsenal player

You are a physiotherapist and ICMFP!

gibbs has made a huge improvement in his game since earlier this season to be sure but i’d still pick a fully fit santos over him. he’s a huge threat coming forward and he’s a big strong lad. would like to see gibbs put a bit of beef on those bones. we have a nice balance at full backs now with 2 experienced pros ahead of two very promising youngsters. same situation almost all over the pitch. if we could just keep everyone fit, clear out the dead wood that has accumulated in the squad and use the money and… Read more »

Assuming they’re both fit and on form you could choose between Gibbs and santos depending on the opposition. I don’t think theres a right or wrong answer but the choice is a fine thing to have. Nice to see you back Andre.

Welcome back Andre, can’t wait to see you dance soon 🙂

[…] are a few bits of team news. Diaby might play for the reserves on Tuesday, Andre Santos is back on track after his run out for the reserves, and Jack Wilshere’s progress is good but there’s […]

Do the reserves play at the Emirates too or do they have another venue?