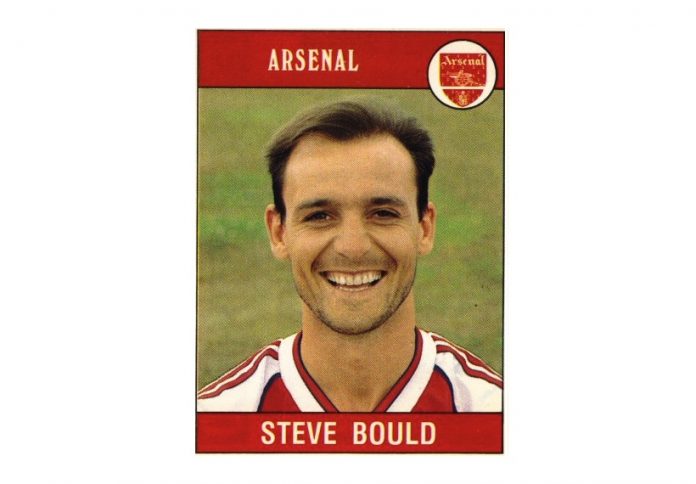 Steve Bould, Arsenal’s under-18 Academy coach, believes he has the ‘best job in the world’ passing on Arsene Wenger’s football philosophy to the next generation of Gunners and has intimated that a step up to coaching the first team is not on his agenda.

The former centre-back, who spent 11 years at Arsenal as part of the club’s legendary defence, has been tipped by former teammates (including Lee Dixon), fans and the media as a possible successor to Wenger when the Frenchman finally decides to step down. Nevertheless, while accepting his current state of mind could change, Bould made clear that the invasive nature of managing in the Premier League does not currently appeal.

“I think when I was asked back then [in the late nineties] I didn’t even contemplate going into coaching, so you never say never, but I feel management is not for me,” he told the official matchday programme ahead of last night’s win against Milan. “It’s just too intrusive on all aspects of your life.”

“I enjoy what I do. I get a massive satisfaction from seeing my players improve and make careers out of the game. The ultimate is seeing players we have worked for running out of the tunnel playing for our first team.

“I honestly feel I have the best job in the world. Doing what I love, with the facilities and footballing philosophy we have at this club, I have a fantastic job.”

While the top job may not necessarily be on Bould’s agenda, the fact that Pat Rice is due to retire this summer has given rise to the suggestion that he could still move into the Emirates dugout in a coaching capacity.

Many have suggested that as a dyed-in-the-wool defender Bould would be able to pass on some of the tactical intelligence learned on the job alongside the likes of David O’Leary, Tony Adams and Martin Keown.

Accepting that certain values remain the same, Bould made clear that the art of defending has changed so much since his retirement that the old days of stepping up as a unit and flagging for offside are long gone.

“You could not step up with your arm out and scream offside like we used to. That is not an area you can really coach any more. Also, you cannot get away with going to ground or any real aggressive tackling the way we used to nowadays.

“So, while there are some principles that persist, passing on what I used to do as a player has to be adapted.”

It should be an interesting summer at London Colney. Picking a successor to Rice could well be the biggest clue Arsene gives to his own future at the club and a much-anticipated insight into life after he leaves North London.

Can’t Pat just add another year? He did it last year!

i think its about time he moved on.. he is quality, but reckon a bit of a shake up in the staff and squad can maybe be a good thing and hopefully it’ll help us take that step closer to some silverware.

saying that though, i have immense respect for pat rice, top bloke, and quality management. as much heat as arsene takes, being his number two, he must feel the pressure too and has responded really well this season so props to him.

“….into life after he leaves North London.”

I really can’t imagine AFC without Wenger, the only Arsenal I’ve known! The 98 UEFA Cup final, where Patrick missed a penalty vs Galatasaray (?!) the first full AFC game I saw! good times!

I’m actually a little scared to think there will be a Wenger-less Arsenal at some point.

I know where you are coming from. I am hoping that whoever will get to succeed the great man will be hand-picked by Wenger and have a year or two under him to be instructed in the Arsenal philosophy.

So when you think about Arsenal from 1886 to 1996 you feel ‘fear’ rather than any sense of pride at all that we achieved ? Chapman, Mercer, Anderlect 1970, Bertie Mee – our first ‘double’, Wembley ’79, Anfield ’89, standing on the North Bank watching us beat Utd to claim the title in ’91, Copenhagen and Alan Smith.

Of course I fully take the point that thinking about any of that is probably too much for some. Let alone all of it. But does it really induce ‘fear’ and presumably disparagement ?

The joys of being a ‘Nouveau Gooner’ !

It’s called the joys of not being fortunate enough to be old enough to experience life with a manager other than Arsene Wenger. If his first match ever was in ’98, then it’s obvious he’s not 60-years-old. Lighten up.

What a twat. Go back to your cave Robby.

What a smuff u are, Rob

What a nob is Rob!

all due respect to the rest of all our old illustrious players. Steve Bould is the only one to come back and do a job. while the rest of them sit back in the media,talking about how Wenger has lost the spirit of the old way. well that’s because the spirit is usually sitting in the bbc/skysports studio or at the s*n/mirror tabloid commentating on a club they should be still involved with. Lee Dixon and Martin Keown are actually a breath of fresh air in the media, but, the rest of them should be slightly ashamed of themselves. would… Read more »

AGunner
Reply to  bob's your uncle

spot on mate, couldnt agree more. dixon and keown are class acts when it comes to the media, rest of them getting paid for their former glory. would be top to see bergkamp or adams succeed pat rice, really think they’d both do well.

ClockEndRider
Reply to  bob's your uncle

Alan Smith is the “Turd-inChief” of these. Alaways a snide remark. Alwayts happy to proppogate the media myths such s Walcott being booed vs Tottnumb. The man is hugely average.

He was one of the best strikers we ever had and a golden boot winner. His goals won us plenty of trophies and his comments in the media strike me as based on objectivity rather than a desire to echo Arsenal’s programme notes.

If he is ‘hugely average’ it’s the sort of ‘averageness’ this Arsenal team cries out for.

I would like to see stokovic fella which is the current manager at grampus in japan in pat rice role next season. He is the next arsenal manager tipped by wenger. Board should start preparing for his departure after 10 more years.. :p

He played under Wenger while Wenger was managing Nagoya. He’s the current Nagoya manager. Won the league with them.

“In a 2009 J.League match between Yokohama F. Marinos and Nagoya Grampus, Stojković amazed everyone by scoring a goal from his technical area. One of the players had just been injured, so the goalkeeper kicked the ball out of play to stop the game. Stojković got out of his seat in the dugout and volleyed the ball, which went high into the air before dipping into goal. For this action he was sent off by the referee.”

here is the link http://www.youtube.com/watch?v=tcYPxrKB6ck

[…] him to drill a back four to match the one he played in is probably unrealistic. Only recently Bould spoke about the impossibility of replicating that sort of unit: “You could not step up with your arm out and scream offside like we used to. That is not an area […]