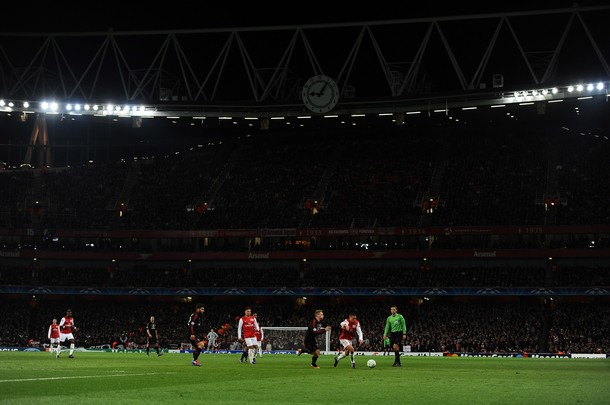 Kieran Gibbs paid homage to the combined effort of his teammates and the Arsenal crowd as he reflected on an epic, but ultimately disappointing, night at the Emirates.

Admitting that the Gunners ran out of steam after a heroic first half effort which reaped three goals, the England left-back made clear that the players couldn’t have given any more effort against AC Milan.

“We gave everything in the first half and if anything we ran out of legs a bit in the second,” he told UEFA.com. “We couldn’t give as much as we wanted to and maybe we ran out of steam.

“We had a point to prove. We were hurt by the result in Milan and we wanted to show who we are and restore some pride.

“They defended better in the second half but we had our chances, but in the end they did their job and they’re the ones who will go home happy. It’s probably worse to come so close and not go through. It hurts, but we did ourselves proud.”

Backed to the hilt by a thumping atmosphere from the first whistle, Gibbs also took the time to thank the home support who provided a soundtrack of hope throughout.

“When the stadium is like this, teams struggle against us because it lifts everyone,” said the 22-year-old.

“The place was electric tonight. After the first one went in we could sense that we could get back into it. We have to thank the fans for that because they helped us get our goals. Unfortunately, though, we just fell short.”

It is now six days until the visit of Newcastle United and the opportunity to consolidate top four credentials as the final weeks of the season approach. Let’s hope the vibrant and respectful relationship between fans and players continues…

Also a sort of proof, if it were needed, that audible negativity is unhelpful.

“audible negativity.” Just had an ear-gasm to that. Arsene’s going to adopt that if ever he hears it.

It can be constructive, but not on a football pitch.

Must be said that Gibbs has done quite well since his return. Colour me impressed.

He’s always been a good player – I’ve seen him quite a few times before in cup games and england u21 games and he’s always looked a prospect. The poor guy has just had bad injury luck. Lets hope he’s put that behind him for his sake and ours.

And somehow when Gibbs is injured, all I hear is that he’s distinctly average leaning on to crap. Please guys, can we actually just conclude whether or not he is crap or not? When he’s actually playing decently, naysayers shut up (because they’ll be thumbed down anyway) while when he plays badly, these same people will jump on the bandwagon and milk a bad performance for every single drop of negativity possible. Not saying all naysayers are like this, but just sayin’. It reminds me of horrible preachers I’ve seen jump on real-world examples bandwagons and never touch on the… Read more »

Whenever in doubt always remember what he did to rooney and ronaldo in the semis of CL at OT.

Was the best atmosphere I’ve seen at the Emirates to be honest. There’s no reason why we shouldn’t do that every game that our team gives it their all. Brought a tear to my eye, when, after the Full-Time whistle a large proportion of the crowd stayed behind and sang “Oh Arsenal we love you” for 10 minutes until the players all went into the tunnel. Incredible. Let’s do this Gooners, let’s get behind the team and push them into third spot. While teams around us are imploding we need to get behind our team and ensure they keep the… Read more »

Again, spurs? Barbs last year? They were much better.

Was at the Sp*rs game this year and the Barca game last year. Think the atmosphere last night edged them slightly.

Regardless, all three should be the target for the crowd for every game we see our players give it their all.

It was amazing, so much noise, best atmosphere i’ve ever felt at the Emirates, loved it

Nights like that which make it all worthwhile. What a connection between the fans and players – the team could not have been in any doubt how passionately we want them to succeed.

“the team could not have been in any doubt how passionately we want them to succeed.”

All except Myles Palmer. I read his article about last night wondering if he could milk some negativity out of it. Sure enough…

Better to have gone out in normal time than to have got a fourth goal then go out in extra time or on penalties. It’s the league that really matters right now to get the an automatic CL qualification place, and this way we put in a good performance and have come away with pride and still on a winning streak without the exhaustion of extra time, or the agony of losing on penalties.

I am the greatest striker that ever lived

Well…errrr….I thought the crowd showed great mental strength and sang without the handbrake on.

They showed belief. And commitment. And spirit.

the only sam is nelson
Reply to  @AAllenSport

i find booing and whistling very unsporting, but the way those fucking italians did it when we had possession at the San Siro made me love every minute of the whistles when they had the ball last night! wish i couldve been there, turning up the surround-sound was a decent alternative! SO so proud of the boys last night!

What will FIFA have to say about this! Electrical appliances providing assists in football?! Wenger out!!

I have been saying all season that we could make a difference with he noise level , if last night does not prove that nothing else will . Monday is another night , are we up for it !!!!

I thought Mr “I don’t do trials” summed up the AC players perfectly last night, as well as the aptitude of the ‘ref’…. with so much more of his ego on display than actual skill, he spent most of the time tripping up over his own size 9’s* (feeling generous there) before flying through the air as though he’d been shot… Something that would have been funny had the match not been officiated by a ‘drowning ref’ who on every occasion nurtured the Swedish Ego with a foul in it’s favour. As for our boys in red, last night they… Read more »

I didnt hear one moan, complaint or jeer last night against our own players or manager and it made a welcome change.

Hopefully both players and supporters have turned a corner with the last 4 big performances. Confident we will nick 3rd place from the Shadowdwellers.

the only sam is nelson
Reply to  north5

it’s the grove and the grove it will remain, even after it’s rebranded as the Walmart Bowl in 2014 to drive consumer awareness in the key US target segments etc etc etc *bleurgh*

What a atmosphere. Ive nver known anything like it! Library!? I think not. We need to do this every game. Last few home games have been amazing. How can any player want to leave fans who support their team like that at 4 nil down? Thats Arsenal and the English league for you. Proud to be a Gooner. Amazing, brave, boys kp going til May!!!!!