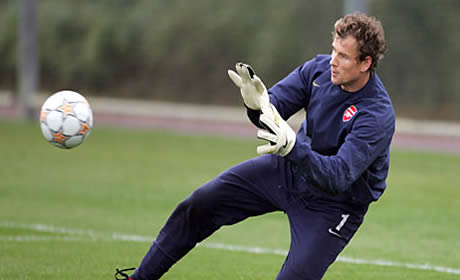 Generally speaking, Arseblog News takes everything the Daily Mail says with a pinch of salt. Mostly because as a paper, and a website, it’s an ill-informed, hit-whoring piece of shit with little or no morality and even less of a track record of getting things right from a football point of view.

Bearing that in mind, you can make up your own mind about their report that the club are set to offer Jens Lehmann a job coaching the reserves as he tries to gain his UEFA Pro Licence.

Jens, being Jens, is apparently in dispute with the German FA and wants to do the course with the Welsh FA because they offer more practical coaching than the theory based programme in Germany.

Jens in dispute with anyone at all sounds pretty believable and last season, when Jens came back, Arsene Wenger was quick to praise his professionalism and influence in the dressing room.

Jack Wilshere was also full of enthusiasm for what Lehmann brought to proceedings.

“He was a bit like an assistant manager on the pitch,” he said. “He was telling us what it is like and was giving a team-talk at half time.

“He is so passionate, you could see that. He was screaming and shouting at everyone.

“I remember him being a bit crazy and a bit of a character before. But he looks after himself and is great to learn from. He’s 41 and he’s got a better body than me!”

Although his remit would be the reserves if this does go through, the idea that Jens might be around to impart some more madness on Wojciech Szczesny is tantalising indeed.

Shine on you crazy diamonds.

plus part of our wages is spent in his dog food!!

Yes. More Germans please. Would love to see him back with us with a whole bag of quality goalie mentalism to offer the yoof.

Only Jens could alienate his own country’s FA to the point whereby he’s forced to go to Wales, possibly the most brilliant German of all time (subject to how many thousands of goals Podolski scores…).

Speaking of Podo, does this mean no more NB52 or am I just having another wet dream?

You would think the club would finally offload NB52, but Mr. Wenger does work in mysterious ways.

I’d rather see NB taking Chamakhs place, with Podolski taking over for Park. With Ryo M. and J. Campbell and possibly Arshavin and Vela returning, it wouldn’t surprise me if we got rid of some useless players.

Did you see Ryo playing this PM against QPR?

Was given Man Of The Match and he is ON LOAN for freak-sake.

My favorite keeper ever!!

“I remember him being a bit crazy and a bit of a character before. But he looks after himself and is great to learn from. He’s 41 and he’s got a better body than me!”

Bring him back to teach the szcz even more stuff!

My favorite keeper too. I never loved a player as much as mad Jens until Santos arrived now.

Szczesny has that craziness about him.
Its the turn of Damien martinez .

Almunia will packing his bags early…

This news would probably sent Almunia packing 3 months too early.

Tim Wiese had the right of it about Jens – but thats exactly what makes him so brilliant. SCSZ is definitely his heir apparent

Time for Arsenal to install toilets behind the goal.

Apologies, a bit pissed this pm….

Would be a masterful signing if it is the case. Oh and blogs, a Floyd fan by any chance?

“Arseblog News takes everything the Daily Mail says with a pinch of salt. Mostly because as a paper, and a website, it’s an ill-informed, hit-whoring piece of shit with little or no morality and even less of a track record of getting things right from a football point of view.”

I think you’re being a bit too kind there mate.

“Jens, being Jens, is apparently in dispute with the German FA and wants to do the course with the Welsh FA because they offer more practical coaching than the theory based programme in Germany.”

LMAOOOO. Yes, if Mad Jens said the Welsh course is better, then to hell with the German course with their backwards courses.

Just one thing, I feel REALLY sorry for Ramsey, he will do a lot of translation into English if he want to or not.

Everton played well i loved the linesman the same guy from the liverpool game,some cunt player from cunt team went and abused him the crowd behind the linesman hit back at that cunt and the crowd and linesman started laughing at that cunt. Then every time the cunts fouled he was so happy to raise his flag.
Cock off you spurs.
Come on gunners hammer newcastle payback time evenif one of the cunts left them.

England manager my arse. In Moyes we trust ha ha

come monday night, we will be saying mua ha ha #up the arsenal

Gather around children and listen to the tale of the power shift in North london…at night they say you can hear the war cry of Bac Sanga chasing the scum who thought they were world beaters!!

Most amusing, Twitchy has really lost his composure – his head was bobbing around like a marionette in the after game interviews. The one thats on the BBC site, he says ‘2nd half’ 10 times in 1.53 secs.. game of two halfs Harry me old cocker, and season of two halfs too. We’re a’coming spuds.

A game of two halves.
And spuds got sod-all in both of them……

Nice to see Mad Jens back. He’ll ssurely help SCZC get even better. Would like Dens and Henry back too.

In another note Lukasz Podolski was sent off today in Cologne match versus Hertha Berlin.

By the why, the Toffees were awesome today. Let’s beat the Geordie twats and Sp*ds will hand over the 3rd spot.

If he wants to work with the Welsh FA, he probably shouldn’t work at Arsenal, which is an English club. Just saying…

Let’s just stick to spurs are shit theme its Saturday

Didn’t anyone else notice Harry ‘the tax dodge’ break a gentlemans agreement not to play Saha??
What a cunt.

Ye the dirty rat, fuck them there falling apart even better that saha hit the post now let’s do the prick pardew Monday night

Am I the only one who thinks England are making a serious mistake if they want cunt hound Harry. Why is he number one contender? He is a wanker. Keep him at the cunts.

They’d be like the two metal heads in the Mighty Ducks.

Lehmann Vs Szczesny is a fight I’d wanna see. My money is on Lehmann all day. He is such a cowardly but loveable savage, I think he would fight dirty.

szczesny reminds me too much of jens. he needs him.