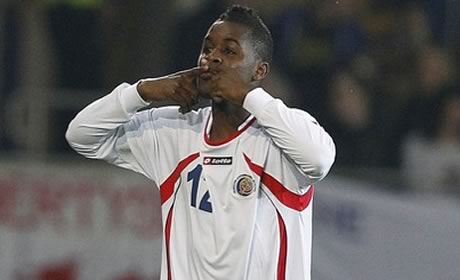 Arseblog News is not a fan of meaningless internationals, least of all ones which put our most important players in peril ahead of a very important game against the dastardly Mugsmashers on Saturday morning.

It seems, at this early stage, that we’ve come through with a clean bill of health with regards to our first teamers, none of whom did anything exceptional during their international travels.

However, Joel Campbell, on loan at FC Lorient, scored a very nice goal for Costa Rica as they played Wales in a Gary Speed memorial match. Footage here. And the more international appearances he makes, the better his chance of securing a work permit for next season.

And much has been made of Henri Lansbury’s two goal salvo for the England U21s. His first was a very impressive looking goal but Lansbury himself admits it was wind assisted, and to us it looks like a cross that hit the defenders foot, thus helping it loop over the keeper.

He did get another though, and Alex Oxlade-Chamberlain was also on the scoresheet, netting a late penalty as England ran out 4-0 winners over their Belgian counterparts.

Andrei Arshavin scored for Russia. Good to see he’s found his shooting boots in a timely fashion and can help with our run in …

Anyway, there are no more Interlulls between now and the end of the season. It’s just real football all the way now.

Nice to see that Lansbury, Ox, Campbell, and Arshavin all played well and scored last night. Anyone else think that now Andrei has left for the time being, he’s going to start banging loads of goals? Like he used to?

You gotta say though his shot wasn’t very good, it was greatly helped by no one bothering to close him down and an inept goalie.

he will score for sure but his problem at arsenal he did not wanted to play it was obvious he was disinterested there . best of luck anyway

That’s obviously because Arsene never game him a kiss on the head when he scored.

Ryo is talented no doubt. Most Arsenal fans are pttrey patient with youngsters but a couple of bad performances could really dent his confidence and his development. A situation like Jenkinson’s @ OT this season comes to mind. We are lucky he has a robust character and his confidence wasn’t completely shot altogether after that nightmare. The thing right now about Arshavin is that he is the only one who seems to be able to deliver a final ball. You can say what you want about his character and work ethic etc but you can’t deny that he is able… Read more »

Joel Campbell seems like a promising talent. I think he could have a bright future at the club. Lansbury is a player I’ve always liked and would love to see him stay at the club but if I remember correctly his contract is up at the end of the season.

wrong. he signed a new long term contract at the start of the season. So hopefully we will see him in an Arsenal shirt in the not too distant future

‘and to us it looks like a cross that hit the defenders foot, thus helping it loop over the keeper’

It swerved much after it passed the defender, there was no contact whatsoever – and if there was any contact (i.e. hitting the defender’s foot) before the ball went in the penalty box, it wouldn’t have remained that high.

Lansbury’s contract was renewed before he went out on loan to westham…..i think a day or 2 before his loan move…even arseblog reported it….i lyk Lansbury a lot,but i dunno about him going on to be a good player for us….i see him ending up at 1 of the mid premier league teams eventually,hoping he can prove me wrong tho

to be fair, if Arseblog News reported it, it is probably a load of gobshite

1 – Lansbury did indeed extend his contract

Whatever
Reply to  arseblog

Are you an English teacher, you should be lucky people commenting on your stupid blogs………..

Well we feel soooooooooooo lucky to have such a complete douchebag like you commenting on this super little forum. If you don’t like it (as appears to be your opinion) then why don’t you simply f*ck off and pollute somewhere else. You c*nt.

Are you an English teacher*?* You should *consider yourself* lucky *that* people *are* commenting on your stupid blogs.

To be fair, he said “blogs” so I gave him the benefit of the doubt and assumed he was talking about the entire site 😉

mate, fuck off, seriously, this is a good blog, partly because idiots like you arn’t around to ruin it, go talk to all the other inbreds on eurosport or something.

Wow…lo and behold. Anyone see that number 10 on the back of Arshavin’s shirt?

We never got the best out of him, and the club has to take some blame for that as much as he does.

That goal wasn’t anything special though, goalie clearly should have stopped that! It was basically right at him!

When I was tracking the results of games yesterday I was not surprised to see that AA23 was on the score sheet for Russia. Given reports that he was on fire during training following his assist to Henry’s goal at Sunderland and his subsequent snub by Wenger. I really do hope AA23 finds himself enjoying football again and revels in it so if he does come back to Arsenal next year we can benefit from it. Or he can at least impress Zenit and we can ask a better price for him. All the best to the little Russian, shame… Read more »

“Anyway, there are no more Interlulls between now and the end of the season. It’s just REAL football all the way now.”

YES! That’s what I’m talking about!

I’d much rather do the unmentionable with Ms Karen Gillan 😉