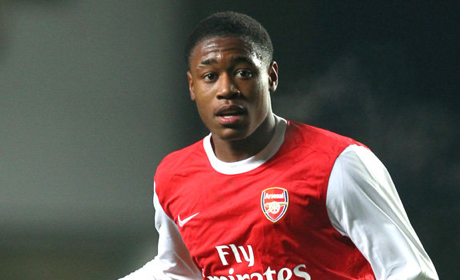 Midfielder Chuks may not have enjoyed the most fruitful of loan spell with Stevenage recently, but he made an instant impact on his return to the Arsenal Reserves side this afternoon by the finding the net in their 2-0 victory away to Chelsea.

Usually used as an attacking midfielder, Chuks, who was capped by England at youth level but subsequently switched his allegiance to Nigeria, is a fine reader of the game and is adept at breaking up attacks as well as instigating them, and has found the net with some regularity for the second string this season.

Skilful on the ball and strong in build, Chuks, who has previously described his understanding with striker Benik Afobe as ‘telepathic’, joined Stevenage on loan to bolster his experience but struggled to adapt to their style of play and didn’t feature with regularity before his loan expired.

Still one of the most promising prospects at the club, he will likely use that setback as ammunition as he attempts to attract the attention of further clubs via the medium of another loan spell. His goal and all-round dominative performance today was the first step in achieving that aim.

Chezza
Click to flag and open «Comment Reporting» form. You can choose reporting category and send message to website administrator. Admins may or may not choose to remove the comment or block the author. And please don't worry, your report will be anonymous.

What player in the EPL or on Arsenal would you compare him to, Jeorge?

sounds like a box to box type to me, with an eye for goal to boot!

He is quite similar to Abou Diaby, without the injuries.

If this the case, I’m ecstatic. Diaby is technically-gifted, and, for the 28 minutes he came on, helped regain the midfield.

Agreed on Diaby. He has the ability to ghost past players almost effortlessly at times.

Hopefully Chuks can get a decent loan spell under his belt soon.

I think we were the better team in the 28 minutes Diaby was on the pitch against lpool. I also think he’d be a brilliant midfielder without the injuries and i have the impression that so does everybody else. But when i recall the times when he played more games for us, i remember him as being a bit inconsistent, sometimes brilliant, sometimes rather poor. So without him proving anything since then (because of injuries) we all seem think that he improved a lot. Don’t get me wrong, I’d love him to put his problems behind him, but couldn’t that be a case of seeing something you can’t have as much better as it actually is?

Big fan of this feature on the site. Great way for us fans to learn more about youngsters at the club.

Yep, especially since the site YoungGuns has stop being updated 😐

I can see what you were trying to do…

Agreed with you in that Gooner Matt. Cheers Jeorge.

More of the same please and how about a weekly report on those on loan?

I think Jeorge does that on his own site – http://arsenalyouth.wordpress.com/

rvp
Click to flag and open «Comment Reporting» form. You can choose reporting category and send message to website administrator. Admins may or may not choose to remove the comment or block the author. And please don't worry, your report will be anonymous.

Wenger should Chuks him on the pitch against Milan?

Naija Gunner
Click to flag and open «Comment Reporting» form. You can choose reporting category and send message to website administrator. Admins may or may not choose to remove the comment or block the author. And please don't worry, your report will be anonymous.