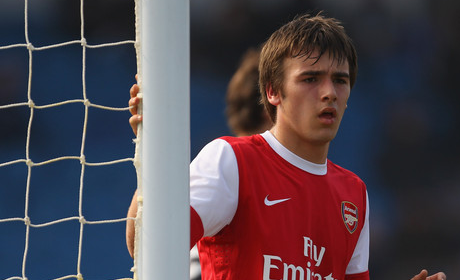 After enduring an injury hit start to the season that meant that he didn’t step onto the pitch until November, promising midfielder Josh Rees has certainly made up for lost time.

The 18 year old, who is renowned for his hard-working nature, impressive passing ability and composure on the ball, has been in explosive form since his return, finding the net 5 times in 13 appearances for the under-18s, which included four goals in as many games recently, whilst also re-establishing himself in the Reserve set-up, having broken into Neil Banfield’s side late last season.

Awarded a professional contract last September, Rees is a versatile player who until this season had tended to operate primarily on the right wing, but has recently been deployed in a deeper midfield role, forging a good partnership with Jordan Wynter.

A key component of the current under-18 side, his enthusiasm for the game is evidenced by his commendable effort in training, and he was rewarded with his first Reserve start of the campaign last week, having previously made seven substitute appearances at that level.

Next season he should push on to become a Reserve regular and, should he carry on his current rate of progression, it may not be too long before a Carling Cup cameo beckons.

He scores when he wants!

At 18 is the window closing on his ability to make it as an Arsenal first-teamer, Jeorge? Seems like the path that ultimately leads players to end up for Palace or Norwich or somewhere…though perhaps injuries mean his timetable has been set back?

whoopeee …. it may not be too long before a Carling Cup cameo beckons.

Great to see him doing well. We have been striving hard to create a talent academy like Barca and looks like it’s paying off.