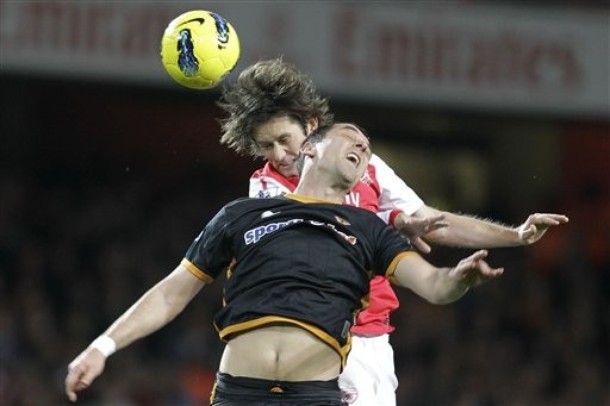 Tomas Rosicky has revealed that he rejected huge offers from clubs in both Russia and China before extending his contract with Arsenal.

The Czech international, who has been in fine fettle in recent weeks, confirmed he made the decision because ‘money is not everything’ although he did admit to entertaining the amazing financial terms for a few days.

Speaking to homeland website isport.blesk.cz the 31-year-old midfielder spoke openly about his contract negotiations at the Emirates.

“Arsenal let me get to the point where I had just half a year on my contract and could talk to anyone I wanted.

“It started to get interesting because I had very lucrative offers. This turned my head a little, but I have to say that Arsenal were my priority.

“In both cases [Russia and China] it was financially huge numbers, so that somehow you had to entertain it, it’s not easy. Some days I thought about it, but money is not everything, I’m glad I’ll be able to continue at Arsenal.”

Dismissing suggestions that his improvement on the pitch came about because he was trying to impress potential suitors, including Arsene Wenger, Rosicky continued:

“I want to say that what was sometimes written, that I have played better because I’m fighting for a contract, had nothing to do with it.

“Although it [the contract] is now signed, it was just a matter of preparing the paperwork. I had given my word to the coach that I would stay much earlier.”

Enjoying his renaissance, the former Borussia Dortmund star made clear that the real reason for his current form has been a combination of staying fit, playing regularly and also being fielded in the centre of the park.

“I am healthy, I play in the centre of the field and have rhythm from regular games. That is all together very important.

“When you play once a fortnight, it is difficult. I know I cannot handle all the games of the season, but the rhythm, being involved at least once a week is very important.”

Cheers to @SiuFay for the heads up on the interview.

Russia and China.. hmm? Surprised he didnt get ones.

great to have him back… he really is LANS.

It’s interesting that he finally got his arse in gear just as his contract was up for renewal, isn’t it?

This article completely disproves your point.

The invincible arse
Reply to  Fatgooner

Fatgooner is a troll

Fatgooner
Reply to  The invincible arse

No I’m not. Why has it taken him so long to perform like this? I know he has had terrible injury problems, but the vast majority of his Arsenal performances have been very average or worse.

Play him every week Arsene.

this guy thomas is a ninja.he is always on the move.now if he can just score those long distance wonder goals he would be a complete LANS.
love the fact that we have a mature LANS.
MLANS

I’m from czech rep. and I just want to tell you that “blesk” is similar to “sun”. Just take it to consideration.

Noted. Is there an equivalent then to the Daily Star? All tits, bingo & PHW?

Yeah, but he actually was talking to them, wasn’t he though?

I think you can do that with Gravatar or something.

Love Rosicky. Always have done, always will. Even when he was injured, I always felt he was a player who had potential, and that one day he would fulfil it. Don’t know if anyone else picks up on this, but he has actually shown signs of enormous technical ability and class ever since he came back from injury. People rave about his last few performances, but I feel it went back a long way before the last few weeks*. He’s technically brilliant; no player is better at keeping the ball in any situation than Tomas Rosicky. It’s just recently he’s… Read more »

Love Rosicky. Always have done, always will. Even when he was injured, I always felt he was a player who had potential, and that one day he would fulfil it. Don’t know if anyone else picks up on this, but he has actually shown signs of enormous technical ability and class ever since he came back from injury. People rave about his last few performances, but I feel it went back a long way before the last few weeks*. He’s technically brilliant; no player is better at keeping the ball in any situation than Tomas Rosicky. It’s just recently he’s… Read more »

Its ok mate, i’ve always loved Rosicky too, ever since he scored against us playing for Sparta Prague at Highbury!

It’s going to be interesting to see what happens when Wilshere comes back, Wilshere is one of the best prospects in English football at the moment, if not the best, but Rosicky NEEDS games to play at the level he has been the last while. If you relegate him to the bench eventually he’ll lose that rhythm, which obviously we don’t want to see happen. They seem to play similar roles so it will be interesting.

I reckon Arteta will rotate out as a bench player – with Song going back to the pure DM role he had last season, leaving Wilshire and Ros as forward playing creative mids.

Let’s also remember Diaby has GOT to come back soon as well – he’ll be another great option for us in the middle if he can recapture form the same way Rosicky has done.

I very much doubt this. Arteta has been one of our best players of the season (I´d say 2nd best). It´s going to be Wilshere, Arteta and Song, with Rosicky and Ramsey on the bench.

he said it himself he can’t play all these games, and we will sure be playing a lot of games next year if we are pushing for a title

I’d like to think that Rosicky would still maintain his starting birth next season. with Ramsey rotating…… and Song/Arteta/Wilshire/Le Coq all rotating in the 2 mid’s deeper. To me it wouldnt really matter who started between song/wilshire/arteta because all 3 are world class.

Playing an an actual real live player in his preferred position and he actually performs well. Who would have thought that would work eh.

Can understand why people have a moan up about him getting a new contract, what with the injury record, but his talent isn’t in doubt, nor his commitment by the sound of it and from what he’s done on the pitch lately. But you can’t have it both ways and moan that we let too many experienced pros go, leaving the youngsters to sink, but then moan when one sticks around. His injury was so unique and unheard of, it baffled the best in medical science – and the Arsenal medics. I’m glad he’s got the chance at last to… Read more »

i have said it – for a player who loves to play football, the hardest thing to do is to leave arsenal. Ask henry. Dont ask ask nas$ri though.

You said it all… who loves to play football, Na$ri doesn’t count.

What a hero. Choosing to stay merely filthy rich instead of disgustingly so.. Glad he stayed nonetheless!

Wow Parisian, cudnt have put it better myself..atleast now i know im not the only one who can see this..

Yep, anyone who wants their own avatar can get it by using http://gravatar.com

Ever thought about using Disqus? It’s the shit!!!!

Yeah, it’s so good that on every Disqus powered site, every fourth post is a rant about how shite Disqus is….

Maybe Arshavin did kidnap ‘Rocisky’, which is why no one at the club can find him. They gave his place to Rosicky and it seems to be working

my favourite things about Rosicky:
1. Pirouettes- watch him, he often seems to pick up the ball and turn full circle. I wonder if it’s because he has a problem turning left, like Zoolander. I love watching him do that. Always seems to keep the ball in doing so!

2. Determined- Always running, doesn’t give up. Much better than Scott fucking Parker.

3. Committed- Has stayed with us through the trophyless years, and is starting to show us what he did before his injury.

4. Technical ability- has reminded us, this season, why we signed him.

Only one word really, and a fairly rare one at that in football. Loyalty.

I hope Na$ri in particular, since he is one of the more recent culprits, reads this. I hope it sickens him to his core at his lack of moral fibe.

Rosicky, go on and write yourself into our history proper and become the legend you deserve to be !

Just have to say his goal against Sp*rs was tits. Maybe my personal favorite of the season

That was so neatly done that it took Friedel’s mental processes a couple of minutes to catch up with the fact that the ball wasn’t between his paws any more.

Tomas Rosicky is LANS baby yeah, I love that guy the way he passes the ball by curling his boot round the ball.

Why cant Denilson, Sqilllaci, Bentner, Almunia, Park and Chamakh be offered ‘huge’ sums to go to China or Russia?

Because they’re not that good at playing football?

Tomas will play his heart out because deep down inside, whole remaining really positive, he wondered if he’d ever really play top level football again. Now that he is he is 100% committed and loving every minute. Good for him.

Are the Czechs in the euros??

Who can be arsed to play in a drug addled gangland anyways, and also in a place with no fish n fuckin chipz!

Let’s hope his injury problems are in the past. Top player – I would love to see him getting that long distance shooting as demonstrated in the 2006 world cup!

I’ve never been sure, is it pronounced Rosicky? Or Rosiscky?

@rectum – yes they are. Guess who their captain is?

Ah shit. Would have loved him to have a nice long summer off…….

Better hope they get knocked out early then…

Rosicky will play most of the games till the end of the season. I reckon Wenger will be super careful with Wilshire’s return and ease him in for the tail end of games in the hope that come August he’ll be properly ready to go.
So basically the team that started against the Toon will be starters until some one gets a knock. AW recognises that it works at the mo and he wont screw with it.

AW is making his plans for next season.Will
be very interesting who will be axed from the
2012/2013 squad.Should be a real clear out
of dead wood

[…] captured the energy of his play perfectly. The Czech noted that he had far more money on offer from Chinese and Russian clubs; “tell me that you want those kind of things that money just can’t buy” […]

“Arsenal were my priority”. Good lad.