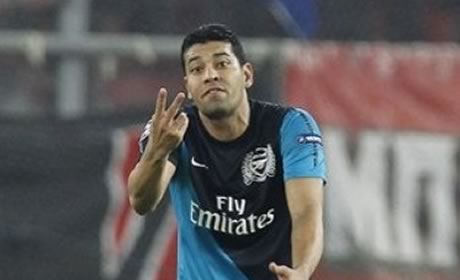 When Arsenal scored the winning goal against Newcastle last night, Arsene Wenger found himself wrapped in the warm, fuzzy, embrace of Andre Santos.

The Brazilian refrained from lifting the boss into the air and twirling him around but the tempatation must have been mighty.

And after the game the boss said that in order for him to gain some fitness after a three month spell on sidelines, the left back would play against West Brom for Neil Banfield’s men.

“Santos will play on Wednesday night in the Reserves against West Brom,” he said. “He will need 90 minutes. ”

The return of Kieran Gibbs and Barcary Sagna has added some real balance to an Arsenal team that struggled without natural full backs for too long this season. And with 10 high intensity games to go this season the boss is going to need to use the full extent of his squad.

Wenger also revealed that Abou Diaby is in contention for a return for the Everton game while Jack Wilshere is making good progress but still some way away from a first team return.

Arsene and Andre doing a Samba dance, Love it.

1st part of the warm up. hehe.

When Santos got back from injury, he began to shout, you girls and boys won’t get and goals if you don’t play me out….

a question for everyone, lets say we are buying Jan Vertonghen/Gotse and/or Hazard, there is also mville(i dont think i spell it correctly) but we have wilshere,diaby,rosicky,ramsay,arteta,song,le coq, OX, frimpong,probably poldi, RYO….i dont see benayoun staying though. please choose the best group of midfield players for next season. i am having hard time letting anyone of our players go.

Well we have all those players today and did we win any trophy? Not saying they are not good enough, no. They are all talented players but we always have our injury haunting us every single season. We don’t need to get rid of our players and we absolutely need to add quality players as well. Rotation and injury will be a massive factor to our future success. The more good players we have, the higher the chances we can win trophy.

If Diaby can stay fit for the rest of the season, and it looks like his biomechanical issues are finally solved, I don’t think we need anyone in midfield, obviously I’d love to see someone like Hazard or Gotze come in but I’m happy with what we’ve got. Creatively, there’s Wilshere/Ox/Rosicky and defensively there’s Song/Coq/Frimps?/Diaby? and somewhere inbetween there’s Arteta/Rambo. Someone is going to get a chance in midfield over pre-season too and given the talent we have there I wouldn’t bet against any of them stepping up.

I see what you both are saying but my fear is that all the arsenal fans are expecting big investment in the summer and there is also the RVP situation. we are linked with all these amazing players who are mainly midfield players. I say all we need is a proven out and out striker even if we buy poldi and get rid of chamack and park( am sorry but they are done). #up the arsenal

D, it’ll be Campbell and Podolski who come in for Chamakh and Park, Poldi is a proven striker and Campbell is your out and out fella. if RvP leaves, obviously we’ll need to bring in another class act but I don’t think that’s happening so people can expect whatever we want, an experienced German (maybe) and a very talented Costa Rican is all we’re getting.

Actually if you look at Diaby’s old games from waaaaay back in the day, he’s played every role in that AW’s trademark midfield three, so similarly to Arteta, he can fulfill any of the roles in that midfield with ease.

I’ve been saying this a bit too, we don’t need more midfielders. With Wilshere back, Ramsey, Frimpong and even Coq there if we need, we’ve got a good base, even if we do lose Benny (and we will). I’d say getting another winger wouldn’t hurt, as we’ll probably say bye bye to Arshavin over the summer as well, which will leave us with Walcott, Gervinho, Ox and Myachi, assuming he is called into the first team and not sent out on loan. Another winger like Hazard would be most welcome, although I have a feeling we’ll not splash the cash… Read more »

I agree with you that a fit Diaby is an excellent prospect. However, I think what the Liverpool and Milan games (just for recent example) exposed is our lack of a deep bench – when the first team is all fit, everything is golden, but the best situation is one in which we should be having problems every game deciding who to play because everyone’s so good. In a couple of positions, we’re getting to that – like Santos’ imminent return to fitness, and rotation between Gervinho, Ox and Bennayoun on the attack. But for midfield, we’re not quite there… Read more »

I’d gladly sell Ramsey to the highest bidder. He just doesn’t do much to excite me. He controls the ball well but doesn’t do nearly enough with it that’s dangerous to the other team. I’d gladly trade him for someone more threatening.

Why Diaby never plays for reserves? He’s been out for ages

thanks, no more questions.

..well fuck you too, andre santos. fuck you!

i thinh he was replying to the picture eboue

You said it man, nobody fucks with the Jesus

Well, unless diaby can get his injury issues resolved, cover is needed in midfield. I’d go for a versatile player, probably one in the rosicky mould. Probably Holtby, who it is rumoured we have a pre-contract with (yeah i know, that’s almost every player now). Squilacci will go, and probably vertonghen/bartley will come in. I expect us to sign a keeper to replace the trio of almunia, mannone and fabianski(all end of contract). Add Podolski and ryo to that list(even campbell, work permit permitting) and we have a good forward line as well. We might even get another striker/winger, that… Read more »

It will be great to see Santos back, but I don’t think that he is a good left-back. He can, however, become a great attacking left-winger. Rather than ‘can’t hit a barn door with a banjo’ Gervinho, I wouldn’t mind seeing Santos play in that position. The best thing about his game is his crossing, and as he showed at Chelsea, he can finish too.

As for Diaby, I think that he should go this summer.

The thing is, should he ever get a run of fitness Diaby will probably be a gun. He’s exactly the type of all-action midfielder that we like. It is a bit annoying to think of all the money spent with very little return on him so far, but for Wenger to allegedly turn down £10m for him last summer there must be a reason he is still around.. Add to that the comments coming from Sagna on how he’d be the best French player (bearing in mind he obviously is going to have mates in the French squad), then I… Read more »

Santos has been getting a lot of funk for being a bit chunky and maybe laissez-faire in his attitude to actually being in a position to defend BUT we’ve all seen what he’s capable of going forward AND I distinctly remember four or five games in a row prior to his injury where players just couldn’t get past him thanks to his secret skill – the perfectly timed step-in tackle. In comparison, I can’t remember the last time I saw Gibbs or Jenkinson pull off one of those successfully.

I think Diaby is most likely to play the rosicky role when fit. I see some people still think he’s this defensive midfielder like PV4 but if he was short pasty and Ginger instead of tall black and French no-one would ever make the comparison. I think Goetze is the player Arsene wants, a tricky CAM who will do what Cesc did. In the wide areas we look like we’ll have Gerv,AOC, Theo, podolski,miyaichi, so I wonder if he’d spend big money on another player, I hope he does though. Personally I think when fit we have a good looking… Read more »

That and the fact Wenger has played him there more than a few times and has stated that he can do that job, after all it’s not like song stays back there all that time. It’s not playing as a pure DM (if there is such a thing nowadays) so much as providing a little more bite and strength in front of the defence rather than poncing around further up the pitch; Diaby can do it all ofc but his height and strength can be a significant difference in a team full of midgets.

Short, pasty and ginger. The lack of the word cunt clearly shows that you weren’t thinking of Paul Scholes when you typed that.

Squad player? I’d play him in front of Gerv and probably Theo, too. I don’t think he’d necessarily be a squad player on our team. He’s scored something like 12 goals for Fulham this year. That beats everyone on our team except RvP.

Welcome back santos we need to rotate Gibbs for the last ten games and overtake the scum and put them back were they belong, below us, after there best ever season hahahaha

By the way blogger – the tags read ‘Andre Santon’. Santon was that guy that Theo had in his back pocket last night. Just FYI!

We know Ryo’s doing well on loan but how’s Campbell doing? From the above it sounds like he’s doing better than the Best Striker That Ever Lived in the Whole World Ever Anywhere which must be good?

Not sure why people are saying Campbell will come into the squad and do well next season. He’s only scored twice at Lorient this season, and they were his first 2 senior goals! He wont get a work permit for a while yet because he’s not in the Costa Rica squad and probably hasn’t proven himself enough for ‘special dispensation’. Just want to hope Podolski isn’t a direct replacement for RVP! If we have both of them fit next season, won’t need another striker. A creative player like Gotze (who wont leave Dortmund yet), a back up defender (Vertonghen would… Read more »

Lets face it, you have no clue. 1) Campbell also has several assists, pretty good for a non-starter/teenager 2) He’s regularly in the Costa Rica squad and he’s been one of their top players in the past year. Keep reading goal.com for more names you can recommend to demonstrate your football knowledge

Who the hell is Szcezney?

You either do it the right way (Szczesny), the horribly bad way (Chesney), or a nick-name (SZCZ). But Szcezney? Seriously?

Almost a fair point exept he is in the costa rica squad……..

Did’ent he score against wales in Gary speed game?

Some time to rest, then to get going again ‹ Arseblog … an Arsenal blog

[…] other news, Andre Santos will play for the reserves tonight against West Brom as he looks to get match fit again, while Wellington says Arsenal are watching […]